END_OF_DOCUMENT_TOKEN_TO_BE_REPLACED

SOUTH KOREA's economy has demonstrated incredible strength and resiliency over the past 65 years, writes Gary Dorsch at Global Money Trends.

It became the eleventh largest economy in the world, and the fourth largest in Asia, behind China, Japan, and India.

Much of the country's infrastructure was destroyed during the Korean War that followed in 1950-1953. After the war, South Korea became heavily dependent on US aid. In the 1960s, GDP per capita was comparable with levels in the poorer countries of Africa and Asia. Yet in 2004, South Korea joined the trillion-Dollar club of world economies.

Following the military coup led by General Park Chung-hee in 1962, South Korea embarked on a series of ambitious five-year plans for economic development. Emphasis shifted to foreign trade with the normalization of relations with Japan in 1965 and a resulted in a boom in trade and investment. Rapid expansion, first into light and then heavy industries, followed in the 1960s and 1970s.

During this period, the South Korean economy grew at an average annual rate of +8.6%. This phenomenal growth is often called the "Miracle on the Han River", the Han River being the main river that runs through the nation's capital and largest city, Seoul.

In the 1980s and 1990s, South Korea transformed itself from an exporter of mostly textiles and shoes into a major global producer of automobiles, electronics, shipbuilding, steel and, later, high-technology products such as digital monitors, mobile phones, and semiconductors.

A system of close government and business ties, including directed credit and import restrictions, initially made this success possible. The government promoted the import of raw materials and technology at the expense of consumer goods and encouraged savings and investment over consumption.

A downturn in consumer spending, attributed to massive personal credit card debt, was offset by rapid export growth, primarily to China. However, its export focused economy was hit hard by the 2008 global economic downturn. It quickly rebounded in subsequent years, reaching over +6% growth in 2010.

The US-Korea Free Trade Agreement was ratified by both governments in 2011 and went into effect in March 2012. The Bank of Korea now expects its economy to be able sustain annual growth of close to +3% on a continuing basis, it said on July 29th, 2017.

However, South Korea's economy centers around the dominance of family-controlled conglomerates, known as chaebols, such as Hyundai, Samsung, LG and SK Company. In 2012; Samsung alone was responsible for 20% of the country's economy. By comparison, government spending there also equaled 20% of GDP. Korea's big four chaebols – giant, family owned conglomerates that essentially control their industries – also control 46% of the nation's total economic output.

Since 2002, Samsung Electronics has been the world's largest supplier of memory chips, called DRAM's and NAND's. But for years demand for memory chips was vulnerable to boom and bust cycles. At times, competition was brutal as supply gluts arose. That changed in 2012 when Japan's Elpida filed for bankruptcy and was sold to Micron Technology, leaving only three major suppliers of DRAM's, a type of memory chip used in servers, computers and handsets: Samsung Electronics, SK Hynix and Micron. Tight supplies coupled with rock solid demand have pushed prices of memory chips higher, with average selling prices of DRAM's and flash memory chips doubling over the past year, bringing South Korea's memory chip makers record wide profit margins.

As such, Intel's more than two decade-long reign as the king of the silicon-based semiconductor is poised to end this year, as Samsung Electronics elbows the Intel aside to become the leading maker of semiconductors. On an annual basis, Samsung's semiconductor division is widely expected to overtake Intel's sales this year. Mobile devices and data are the keys to understanding Samsung's ascent as the new industry leader. Manufacturers are packing more and more memory storage capacity into ever smaller mobile gadgets, as increased use of mobile applications, connected devices and cloud computing services drive up demand and consequently prices for memory chips, an area dominated by Samsung.

Other milestones may be waiting. Samsung's quarterly profit could have surpassed Apple's for the first time. In the past, Samsung's financial performance mirrored the global economy or the cycles in the consumer electronics industry, such as how often users upgrade their televisions or smartphones. That is no longer the case. Even as demand for smartphones that had fueled Samsung's profit has slowed, Samsung is on a roll because its memory chips are crucial for global tech companies in the era of explosive growth of data. Looking ahead, Samsung and SK Hynix, which control more than three quarters of the global DRAM sales, are raising their spending on semiconductor capacity and development in anticipation of robust future demand.

In 2015, about 46% of South Korea's GDP was due to the export of goods and services. About 48% of all Korean exports consist of electronics and related components while 31% are transportation goods.

Indeed, booming sales of memory chips and electronic displays in August 2017, lifted South Korea's exports to their longest run of growth in almost six years, and highlighting a pick-up in global demand. South Korea's exports to China rose +16% from a year earlier, posting the longest stretch of sales to its bigger neighbor since 2014, while shipments to the European Union surged +43%. Overall, August's exports rose +17% from a year earlier to $47 billion, while imports surged +14% to $40 billion. This produced a $7 billion trade surplus, and followed a $10.3 billion surplus in July.

Fueled by booming exports, South Korea's share index soared into record high territory, as the Bank of Korea kept interest rates unchanged at a record low at 1.25% for 12 straight months. The Korea Composite Stock Price Index (KOSPI) hit its highest level in its history. The index touched as high as 2,434. 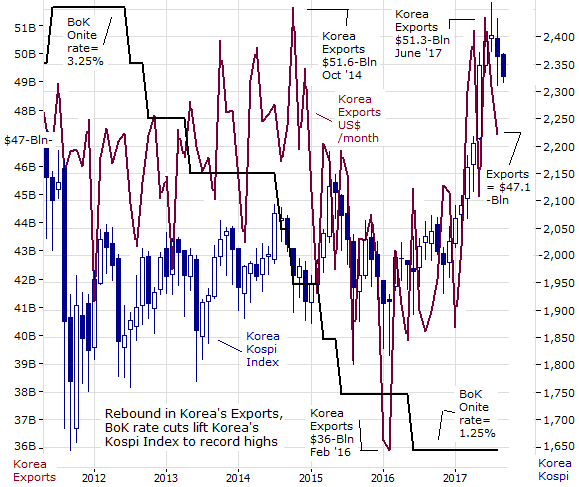 The Kospi rally was mainly driven by Samsung Electronics, which also hit an all-time high – it had climbed +28% in the year to date, pulling the rest of the market along with it. Samsung alone had driven 40% of the Kospi's gains in the year to date. Samsung rose to a market weighting of 25% of the entire Kospi index with a market capitalization of $288 billion. Samsung vowed to buyback $35 billion of its shares and was a major trigger for the Kospi's historic rally,

However, a game-changing shift in the playing field for any of Korea's exports could spell a slow but steady downward slide for the entire Korean economy. Even a -10% drop in exports would literally shrink the economy by nearly -5%. The game changer might have begun shortly after the news that North Korea announced on Sept 2nd, that it is in possession of an "advanced Hydrogen bomb," after unleashing its most provocative action yet: its sixth nuclear test, and triggering a tremor 10 times as powerful as that from its test a year ago and just hours after it showed off what it called a hydrogen bomb capable of being mounted on a long-range missile. The explosion was nearly ten times more powerful than the atomic bomb dropped on Japan during World War II.

In a segment broadcast on Sept 2nd by the Korean Central Broadcasting Network, the North's state-run television-news network, North Korea's leader, Kim jun Un can be seen looking on as a purported thermonuclear warhead is loaded onto an intercontinental ballistic missile, which KCNA described as having "great destructive powers."

KCNA added that all hydrogen bomb components are homemade, so the North can "produce as many as it wants." The report also claimed that the North have developed a powerful electromagnetic pulse weapon. Traders fear an attack with this type of weapon could wipe out the electrical networks in South Korea, and shut down its economy.

Despite South Korea's stellar economic prowess in the world markets, its Achilles heal is its close proximity to its dangerous neighbor to the North. Following a -5% slide in the Korean Kospi index from its 52-week highs, South Korea's finance minister vowed on Sept 4th to support Korea's local financial markets if instability caused by Pyongyang's latest nuclear weapon test shows signs of spreading to the real economy.

"We are aware that there could be negative ripple effects should geopolitical risks resurface," Kim Dong-yeon said in a policy meeting urgently scheduled with the central bank and financial regulators before financial markets opened on Sept 4th. "We will monitor the economy (ie; stock market) around the clock and make swift, stern responses to stabilize the markets (ie; buy Korea's won vs foreign currencies, and buy Kospi futures) according to our contingency plan as needed," Kim warned.

As such, South Korea's "Plunge Protection Team" is now on full alert, but can it overcome Pyongyang's brandishing of its hydro bomb? And making matters worse, the Trump administration could soon give notice to Seoul that it plans to withdraw from a bilateral Free Trade trade agreement that has been in effect since 2012, the Wall Street Journal reported on Sept 2nd. The report cited "people familiar with the matter." "Unfortunately, too many American workers have not benefited from the agreement," Ambassador Lighthizer said in a statement posted on the USTR website.

"President Trump is committed to substantial improvements in the Korean agreement that address the trade imbalance and ensure that the deal is fully implemented."