END_OF_DOCUMENT_TOKEN_TO_BE_REPLACED

That's how the business cycle ends, says this analysis...

In JULY, the Institute for Supply Management's (ISM) Non-Manufacturing Index fell to an 11-month low, writes Frank Holmes at US Global Investors.

Reading 53.9, it came 3.5 points below its June reading of 57.4. The index measures the non-manufacturing, services industries such as food services, education, real estate, health care and more. 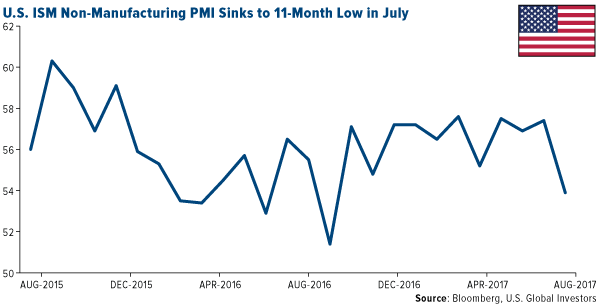 Economists had expected a reading closer to 56.9, so it's safe to call this a disappointment.

Although the index is still above the key 50 threshold, where it's held for 91 straight months now, the slowdown suggests that "the economy may have lost some momentum going into the third quarter," as Capital Economics' Andrew Hunter said in a note last week.

Following this report, it's possible we'll see the US Dollar rally before pulling back even further. Having hit a 15-month low in July, the Dollar looks oversold and ready for a "retracement" as CLSA's Christopher Wood put it.

"It remains remarkable how weak the Dollar has been so far this year given the Fed's surprisingly hawkish rhetoric and given that its latest statement last week still suggests that the American central bank intends to commence balance sheet contraction next quarter," Wood wrote in the latest "GREED and fear."

July was the Dollar's fifth consecutive month of losses, the longest such stretch since December 2010 through April 2011. As I said in another Frank Talk, the major contributing factor to the greenback's slide is political uncertainty surrounding President Donald Trump and Congress.

Not only did the Obamacare repeal and replace bill fail (again), but Trump's White House continues to look like a revolving-door workplace, with the foul-mouthed Anthony Scaramucci pushed out as communications director last week after only 10 days on the job. This reportedly came at the urging of brand new chief of staff John Kelly, who recently replaced Reince Priebus.

But it's no secret that Trump favors a weaker currency. Since he declared that the Dollar was "getting too strong" back in April, it's lost close to 8% of its value against a basket of several other currencies. Add to this the disappointing ISM report, weakening automobile sales and slightly lower-than-hoped-for GDP growth in the second quarter, and it seems less and less likely we'll see more than one additional rate hike in 2017.

The Labor Department announced the US economy added a robust 209,000 jobs in July, beating the consensus, while the unemployment rate dropped even further to a 16-year low of 4.3%.

Wage growth, however, remained pretty flat, which is a concern. Consumption is the number one driver of economic growth in the US, and if American workers aren't getting raises, they're not spending more.

All of this is spurring some economists to rethink their US growth estimates. In its World Economic Outlook for July, the International Monetary Fund (IMF) revised down its domestic economic growth forecast, from 2.3% to 2.1% in 2017, and from 2.5% to 2.1% in 2018. The Washington-based fund attributes this revision to "the assumption that fiscal policy will be less expansionary than previously assumed, given the uncertainty about the timing and nature of US fiscal policy changes."

IMF economists, in other words, have doubts that tax reform, deregulation or an infrastructure package will be coming anytime soon.

We'll see if they're right. After the August recess, Congress plans to tackle tax reform, which the US sorely needs. I hope lawmakers can come together and pass a comprehensive bill this fall that will deliver some relief to American workers, families and corporations.

Big changes could be coming on the monetary side this fall as well. In an address to the Economic Club of Las Vegas last week, President and CEO of the Federal Reserve Bank of San Francisco John Williams said the Fed will likely begin the process of monetary normalization as soon as next quarter. This includes unwinding the Fed's $4.5 trillion balance sheet, composed of long-term Treasuries and mortgage-backed securities (MBS). The process could take up to four years to complete. 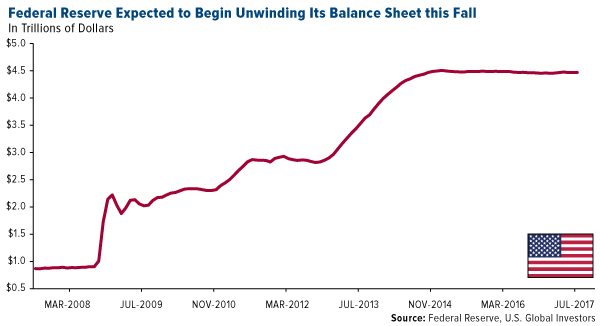 Now that "we've finally recovered from the recession," Williams said, it's time for the private and public sectors to "step up and take the lead in making the investments and enacting policies needed to improve the longer-term prospects of our economy and society."

I agree 100%. For nearly 10 years now we've seen an imbalance in monetary and fiscal policies, with the economy and stock market being propped up by cheap credit.

That's according to research firm MKM Partners, whose chief economist, Mike Darda, urged attendees of a Fidelity event in May to hope for the best but prepare for the worst.

"My opinion is that business cycles don't just end accidentally," Darda said. "They are killed by the Fed. If the Fed tightens enough to induce a recession, that's the end of the business cycle."

So how can investors prepare?