END_OF_DOCUMENT_TOKEN_TO_BE_REPLACED

Now a long way from "high yield", junk is just junk. So are UK gilts...
THEY CALL them 'junk bonds' for a reason, writes Tim Price on his ThePriceOfEverything blog.
They now constitute an offence against linguistic decency: 'high yield' no longer even is. Consider the chart below – it shows the BofA Merrill Lynch High Yield Master II Index's interest-rate spread on US Treasury bond yields... 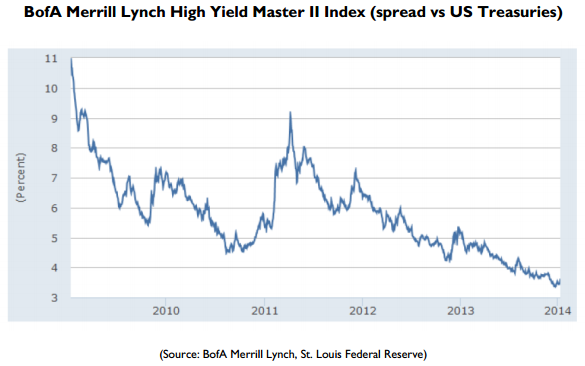 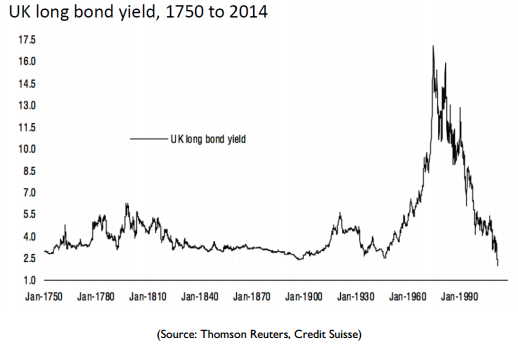 In the entire history of the UK gilt market, yields have never been as low. This suggests that gilt buyers at current levels are unlikely to enjoy an entirely blissful investment experience.
Just to round up this analysis of bond investor hyper-exuberance, consider this last chart, which puts interest rates (in this case, the UK base rate) in their historical context.

There is one (inverse) correlation in investment markets that is pretty much iron-clad. If interest rates go up, bond prices go down. This is entirely logical, since the coupon payments on bonds are typically fixed. If interest rates rise, that stream of fixed coupon payments loses its relative attractiveness. The bond price must therefore fall to compensate fixed coupon investors.
So now ask yourself a question: in what direction are interest rates likely to go next? Your answer may have some bearing on your preferred asset allocation.
Bond investors may be acting rationally inasmuch as they believe that central banks will keep interest rates "lower for longer". But even more rational investors are now starting, loudly, to question the wisdom of central banks' maintenance of emergency monetary stimulus measures, at least five years after the Global Financial Crisis flared up.
Speaking at the 'Delivering Alpha' conference covered by CNBC, respected hedge fund manager Stanley Druckenmiller commented as follows:

"As a macro investor, my job for 30 years was to anticipate changes in the economic trends that were not expected by others – and therefore not yet reflected in securities prices. I certainly made my share of mistakes over the years, but I was fortunate enough to make outsized gains a number of times when we had different views from various central banks. Since most investors like betting with the central bank, these occasions provided our most outsized returns – and the subsequent price adjustments were quite extreme. Today's Fed policy is as puzzling to me as during any of those periods and, frankly, rivals 2003 in the late-stages to early-2004, as the most baffling of a number of instances I have in mind.
"We at Duquesne [Capital Management] were mystified back at that time why the funds rate was one percent with the 'considerable period' attached to it, given the vigorous economic growth statistics available at the time. I recall walking in one day and showing my partners a bunch of charts of economics statistics of that day and asking them to take the following quiz:
"Suppose you had been on Mars the last five years and had just come back to planet Earth. I showed them five charts and I said, 'If you had to guess, where would you guess the Federal funds rate was?' Without exception, everyone guessed way north of one per cent, as opposed to the policy at the time which was a verbal guarantee that they would stay at one percent for a 'considerable period of time.
"So we were confident the Fed was making a mistake, but we were much less confident in how it would manifest itself. However, our assessment by mid-2005 that the Fed was fueling an unsustainable housing Bubble, with dire repercussions for the greater economy, allowed our investors to profit handsomely as the financial crisis unfolded. Maybe we got lucky. But the leadership of the Federal Reserve did not foresee the coming consequences as late as mid-2007. And, surprisingly, many Fed officials still do not acknowledge any connection between loose monetary policy and subsequent events.
"I hope we can all agree that these once-in-a-century emergency measures are no longer necessary five years into an economic and balance sheet recovery. There is a heated debate as to what a 'neutral' Fed funds rate would be. We should be debating why we haven't moved more meaningfully towards a neutral funds rate. If for no other reason, so the Fed will have additional weapons available if the outlook darkens again.
"Many Fed officials and other economists defend their current policies by claiming the economy is better than it would have been without their ongoing stimulus. No one knows for sure, but I believe that is logical and correct. However, I also believe if you'd asked the same question in 2006 – that the economy was better in 2004 to 2006 than it would have been without the monetary stimulus that preceded it. But was the economy better in total from 2003 to 2010 – without the monetary stimulus that preceded it?
"The same applies today. To economists and Fed officials who continually cite that we are better off than would have been without zero rate policies for long, I ask 'Why is that the relevant policy time frame?' Five years after the crisis, and with growing signs of economic normalization, it seems time to let go of myopic goals. Given the charts I just showed and looking at economic history, today's Fed policy seems not only unnecessary but fraught with unappreciated risk. When Ben Bernanke and his colleagues instituted QE1 in 2009, financial conditions in the real economy were in a dysfunctional meltdown. The policy was brilliantly conceived and a no-brainer from a risk/reward perspective. But the current policy makes no sense from a risk/reward perspective.
"Five years into an economic and balance sheet recovery, extraordinary money measures are likely running into sharply diminishing returns. On the other hand, history shows potential long-term costs can be quite severe. I don't know whether we're going to end with a mal-investment bust due to a misallocation of resources; whether it's inflation; or whether the outcome will actually be benign. I really don't. Neither does the Fed."

No more charts. If these three don't get the message across, nothing will.
The bond environment, ranging from high yield nonsense to government nonsense, is now fraught, littered with uncertainty and unexploded ammunition, and waiting nervously for the inevitable rate hike to come (or bracing for a perhaps messy inflationary outbreak if it doesn't). There are clearly superior choices on a risk-reward basis; we think Ben Graham-style value stocks are the logical and compelling alternative.