END_OF_DOCUMENT_TOKEN_TO_BE_REPLACED

At least in terms of what mining exploration has recently found...
FOR THE past decade, writes Frank Holmes at US Global Investors, junior mining companies have outperformed senior miners at finding new mineral deposits and generating wealth for investors.
These are among some of the findings released in a study conducted by resource company strategist MinEx Consulting, which analyzed the performance of explorers and producers operating in Canada between 1975 and 2014.
What the consultancy firm found is that, in the last decade, junior companies were responsible for more than three quarters of all new mineral discoveries and were approximately 30 percent more effective than senior companies at generating wealth.
Ralph Aldis, portfolio manager of our two precious metals funds, agrees with the results of the study. In a March interview with The Gold Report, he noted that junior gold producers "have the flexibility to be able to adjust" to varying commodity-price conditions.

"It's the smaller, midsized companies that have a better handle on their operations," Ralph said.

A good example of such a small-cap miner would be Claude Resources Inc. The only producer operating in Saskatchewan, Canada, it managed to turn its operation around fairly quickly after netting a huge loss of $73 million in 2013. The company just reported a profit of $4.6 million in 2014, driven by "record production performance," according to president and CEO Brian Skanderbeg.
For the one-year period, the company is up a phenomenal 216 percent.

"Claude has been around for a long time, but its new management understood that it had to change its mining method, which has made a big difference," Ralph said in The Gold Report.

Junior companies have increasingly played an essential exploratory role in Canada. Nearly 40 years ago, they were responsible for only 5 percent of all capital spent on exploration; by 2007, that amount had ballooned to more than 65 percent. Over the past decade, juniors have accounted for 54 percent of all spending on exploration in Canada. 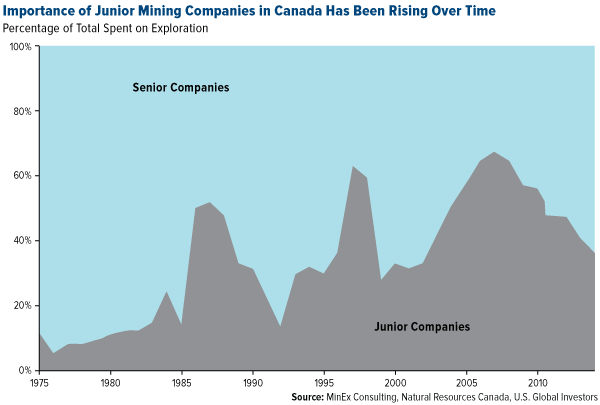 As a result, major producers have steadily lost ground to the smaller players in terms of discovering new mineral deposits. In three of the previous 10 years, in fact – 2009, 2010 and 2012 – senior companies failed to make a single new discovery. 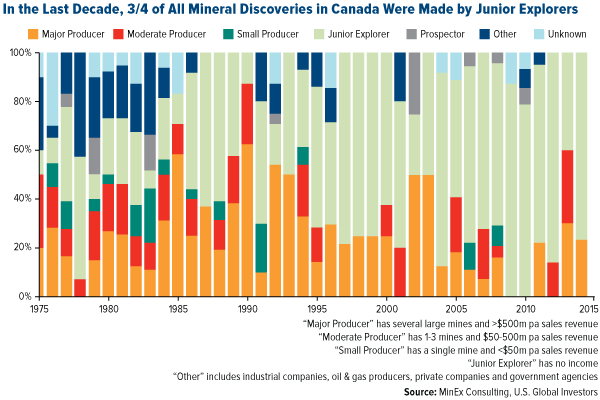 Not all mineral deposits are created equal, of course. Some might be all a producer needs to be successful, whereas others aren't even worth the time and capital to develop.
You can think of a Tier 1 deposit as a "company making" mine – one that might yield up to 250,000 ounces of gold per year over its lifespan of 20 years or more. Some of these projects can easily be valued at over $1 billion.
A Tier 2 deposit is significant but not as profitable as a Tier 1, with a typical valuation of between $200 million and $1 billion.
Finally, a Tier 3 deposit is considered marginal, valued at anywhere between $0 and $200 million.
About 80 percent of the mining industry's wealth is generated from Tier 1 and Tier 2 projects. But such discoveries, as you might imagine, are muchrarer than Tier 3s. To give you an idea of just how rare they are, consider this: Every decade in Canada, the industry discovers on average 40 Tier 3 deposits, seven Tier 2 deposits – and only three Tier 1 deposits.
So how do the juniors stack up against the seniors when it comes to finding quality mines? In the table below, you can see that they're running slightly behind. In the past decade, juniors made 7.3 Tier 1 or 2 discoveries in Canada, compared to the seniors' 8.7.

But – and this is a big "but" – they handily beat the seniors when it came to the total number of discoveries. Of all the deposits found, over three quarters were made by junior miners.
As I said earlier, juniors spent more than the seniors on exploration during this timeframe ($14.6 billion compared to $12.5 billion), and their discoveries collectively had a much higher valuation ($12.1 billion compared to $7.9 billion). Accordingly, they were roughly 30 percent more effective than seniors at generating wealth for investors. Put another way, they had a greater "bang for your buck."
This news bodes well for our two precious metals funds. Although they both invest in junior explorers and producers, the Gold and Precious Metals Fund also allocates assets to the large-cap, senior mining companies. 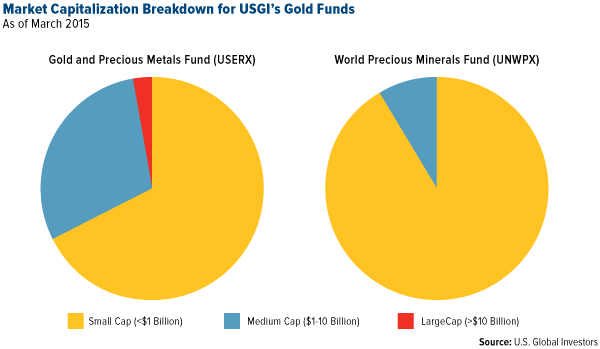 Not only that, but Canada is the top investment destination in both funds: 57 percent in USERX, 77 percent in UNWPX. Canadian mining companies have lately seen margin expansion because the majority of their costs are in the relatively weak Canadian Dollar, yet they sell their commodities in the strong US Dollar.
According to MinEx, 19 percent of the world's high-quality Tier 1 and 2 mineral discoveries were made in Canada between 2005 and 2014. That's second only to the entire continent of Africa (25 percent). The country's mining industry also has an estimated value of $19 billion, or 21 percent of total valuation worldwide. At 0.77, Canada's value-spend ratio, or "bang for your buck," was better than the global average of 0.67.