END_OF_DOCUMENT_TOKEN_TO_BE_REPLACED

Why the US debt crisis points to inflation, not a deflation like Japan suffered...

The INFLATION/DEFLATION DEBATE in the United States is still alive and well, writes John Lee of GoldMau.com.

In deflation camp, there is the rising star du-jour Nouriel Roubini and old timer Robert Prechter. They argue the debt collapse would cause price deflation and depress world economies for years to come.

The inflation camp includes Jim Rogers and Marc Faber, who said on May 27 2009 that "I am 100% sure that the US will go into hyperinflation."

The deflationists often talk about the two historic showcases – the 1930s US depression and Japan's lost decade of the '90s. In both of those cases, debt-fueled equity and real estate bubbles were gigantic and exceeded 100% of the GDP in size. The subsequent debt implosion caused a 50% and more retrenchment in their respective equity and/or real estate markets.

While there are similarities in the cause of the bubble and immediate effect after the debt collapse, the long term economic outcome and survival can be very different. In this paper we will debunk the claim that US is facing an imminent '90s Japanese-style deflation.

Why? Because fractional-reserve monetary systems are inherently unstable. Money is created out of thin air by the banks and lent to government, consumers and businesses. In order to service and replay those debts, the borrowers take on more debts. Collateralized asset prices are inflated, and the vicious cycle continues until the debtors are unable to borrow or the banks are unwilling to lend. At that point the system snaps, everything is sold off, asset prices dive and we have a financial crisis at hand.

Japan had an equity bubble and real estate bubble in the late 80's fueled by easy credit and excessive borrowing. The bursting of Japan's bubble economy in the early 1990s triggered an economic slump that has sometimes been called the "lost decade". The Nikkei stock index declined by more than 70%, and commercial land prices in large cities fell 82% from their peak, creating stockpiles of nonperforming loans. Altogether such loans were estimated to be in excess of US$2-$3 trillion, which is more than Japan's GDP.

Throughout the crisis, the mortgage market was comparatively stable, as banks were willing to restructure the loans and defer payments. In Japan it is shameful to walk away from your home and mortgage, and fear of repossession kept default rates relatively low.

In the 1990s, as interest rates fell, so too did default ratios too – down from 2-3% to less than 1%. At the start of the decade, Japan was running a balanced budget which created room for fiscal deficit spending. It wasn't till 1997 that budget deficit ran into double digit of GDP. 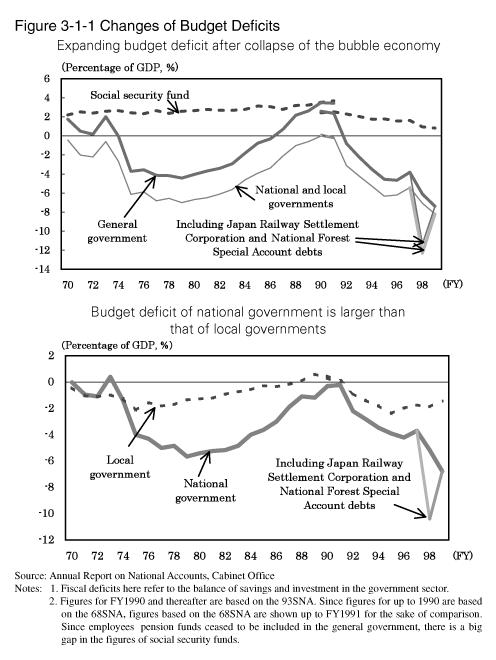 This positive current account enables the government to expand spending without fear of inopportune foreign attacks on the Yen through debt and stock redemption. 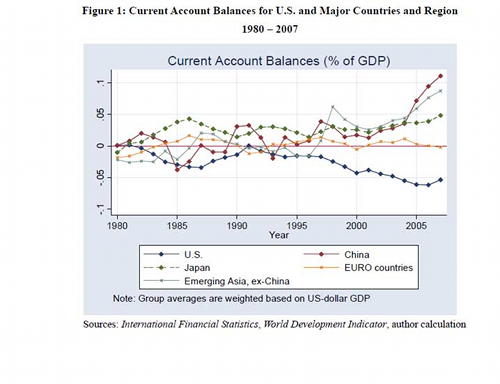 Japan's national savings rate throughout the '90s also exceeded 30% which created demand for the Yen. 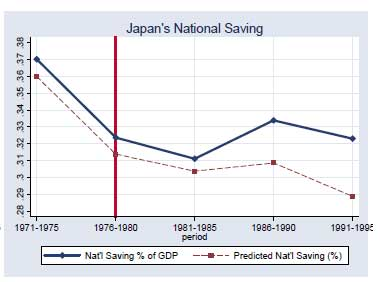 During the same period, Japan was the world's dominant creditor and the Yen was kept in high demand on the world stage.

As shown in the chart below, the Yen appreciated 100% against the Dollar from 1990 to 1995. Purchasing power of the Yen was further enhanced through slow and painful deleveraging, whereby world assets owned by indebted Japanese firms were sold to raise Yen to be repatriated.

Thus Japan tried Quantitative Easing, creating money to buy public and private assets (Treasury bonds, mortgage bonds, even stocks). Like the current efforts – again in Japan but also in the US, UK, Switzerland and Europe – this is a direct attempt to prop up prices through money printing.

Faced with a sluggish Japanese economy post-Nasdaq bubble, the Bank of Japan lowered the policy rate to zero in February 2001 and then went to quantitative easing the next month.

It ended both quantitative easing and its zero interest rate policy only in 2006. The size of the bond-buying operation became the policy tool to target the level of reserves rather than the policy rate, which was fixed at virtually zero. At its peak, reserves reached around Y35,000bn ($300 billion) of which only around Y8,000bn were required.

Although a modest boost to GDP was observed through quantitative easing, the perceived growth came at the expense of the Yen. Indeed, the Yen lost nearly 20% against the Dollar in just 12 months from the quantitative easing announcement.

It doesn't take an academic to figure out that money printing resorts to depreciating currency and inflation, it not a matter of if but when. And it's interesting to note that Japanese understood the use of "quantitative easing" as last resort. Interfering prices so blatantly can cause irreparable damage to the currency, and the BOJ exercised this dubious demon power only some 11 years after initial debt bubble burst.

Now let me summarize the USA's condition today by saying that, post-bubble, it has almost nothing in common with that of Japan in the 1990s.

Japan entered into its crisis with a balanced budget, while the US 2009 budget deficit is projected to be 12% of GDP. Such a daunting budget gap is reserved mostly for 3rd world countries. For example, during Argentina financial crisis in 2002, the country's budget deficit was only a "modest" 4.6% GDP.

What's most alarming? The US's 12% budget deficit is only the beginning of a trend. Seeing all levels of government severely short on tax receipts, most analysts project the deficit to worsen further into future years.

Further, in the '90s, Japan was the world's top creditor nation whilst the US today is the world's largest debtor nation with over $12 trillion owed to foreigners. In 2008, the US imported $670 billion more than it exported. The country requires foreign trading partners to re-invest all of that $670 billion to keep the Dollar afloat. This means external debt would have to increase at least by similar amount just to keep the status quo. 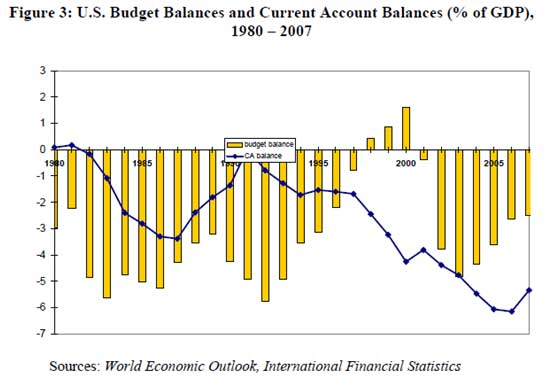 China has so far invested in $800 billion of US Treasury bonds. What if they want to withdraw? Who can buy $800 billion worth of US debt...?

Well, the Federal Reserve Bank is our savior and lender of last resort. The Fed is generous and has offered to buy US notes of all kinds.

To quote directly from Ben Bernanke, chairman of the Fed:

"The US government has a technology, called a printing press (or, today, its electronic equivalent), that allows it to produce as many US Dollars as it wishes at essentially no cost. By increasing the number of US Dollars in circulation, or even by credibly threatening to do so, the US government can also reduce the value of a dollar in terms of goods and services, which is equivalent to raising the prices in dollars of those goods and services. We conclude that, under a paper-money system, a determined government can always generate higher spending and hence positive inflation."

I find it amusing that the deflation camp still exists after such statement. Since 2008 the Fed has bought over $2 trillion of soured notes issued by AIG's and the like. To pick up the slack from wary demand of US assets by foreign creditors, the Fed recently affirmed the commitment to buy additional $1.7 trillion worth of mortgage-backed bonds and US Treasuries.

It took 10 years after the bubble burst in Japan to take on quantitative easing. The US entered into financial crisis in 2008 and Mr. Bernanke is already prepared to print upwards of $4 trillion by the end of 2009.

Thus the Dollar chart below shows a distinct bearish trend.

By now, it should be crystal clear that the immediate US path is NOT Japanese style deflation of the 1990s. The path of concern is Argentine style hyperinflation of 2002, when the impaired Peso was permanently devalued after the country's latest debt crisis.

If one sums up all recognized debt of federal, state & local governments, international, private households, business and domestic financial sectors, including federal debt to trust funds, the total debt in America is over $57 trillion, or $186,717 per capita.

Foreigners own over $5 trillion of the national debt and over $12 trillion of all US debts. Even at 10% savings rate, it would take a full decade for US citizens to pay its foreign obligation. But with hundreds of billions added to the external debt clock every quarter and a national savings rate of less than 7% even amid the current recession, the fat lady may never sing and foreigners may never get the payback in full, in today's dollars anyway.

With those stats in mind, it's completely rational and clearly in the best interest of America to repudiate foreign debts.

That's the inflationary Argentine path. Not Japan in the 1990s.

Foreigners don't have political representation in the US, so why would an average Joe work to pay foreigners? It's far easier to debase the currency.