END_OF_DOCUMENT_TOKEN_TO_BE_REPLACED

Yet average UK exposure just 3%...
MICHAEL CRICHTON is rightly famous for his many best-sellers, writes Tim Price on his ThePriceOfEverything blog.
The Andromeda Strain and Westworld were probably the best big screen adaptations. But he deserves more credit for helping to popularise the Gell-Mann Amnesia effect. The market analyst Ben Hunt cites him as follows:

"Briefly stated, the Gell-Mann Amnesia effect is as follows. You open the newspaper to an article on some subject you know well. In Murray's case, physics. In mine, show business.
"You read the article and see the journalist has absolutely no understanding of either the facts or the issues. Often, the article is so wrong it actually presents the story backward – reversing cause and effect.
"I call these the 'wet streets cause rain' stories. Paper's full of them.
"In any case, you read with exasperation or amusement the multiple errors in a story, and then turn the page to national or international affairs, and read as if the rest of the newspaper was somehow more accurate about Palestine than the baloney you just read. You turn the page, and forget what you know."

At last week's Master Investor Conference in central London, newspapers were name-checked as among the sectors that are being swiftly 'right-sized' by the gales of creative disruption sweeping the world. (Two others being retailers and textile manufacturers, where the entire market is cheerfully engaging in low-wage arbitrage on a global scale.)
Given the dubious value of most journalistic content, this aggressive 'right-sizing' is probably no bad thing. Unless you're a journalist. At which point we feel honour-bound to republish one of the snarkiest tweets yet committed to the medium, from the US lawyer and Adam Smith Institute member Preston Byrne, in response to the self-interested press reaction to hundreds of layoffs at the digital publisher Buzzfeed:

*Overfunded media company lays off 10 people*
Journalists: "Capitalism is evil and this is the end of our democracy."

Other than being misled by clueless but seemingly weirdly entitled journalists, it is said that investors are often influenced most intensely by one fact over any other: when they had the good fortune to be born; or, perhaps even more precisely, when their investment career properly began.
As chemistry prof. and market tweeter par excellence David Collum points out, choose the admittedly somewhat arbitrary starting point of 1999 and the subsequent returns, by asset class, will probably surprise you:

That these asset class returns are US-centric probably only makes them even more disconcerting for non-US investors.
REITS, really? And then gold? Just to add insult to injury, check out the performance of the average investor.
Many longstanding UK investors will have been blindsided by two key developments: one being the peak of the Japanese stock market back in 1989 and its subsequent collapse; the second being the inability of financial journalists to cover its more recent recovery with anything approximating to objectivity or impartiality, haunted by those market returns of the 1990s and 2000s.
A third development that won't have helped will have been the widespread view that the Japanese are getting older by the second and pretty soon will have died off entirely. This last view has been aggressively co-opted by young Continuity Remainers in the UK. But as Continuity Remainers seem determined never to appreciate, things change.
By dint of having entered a calamitous deflationary depression 20 years before the rest of the world, the Japanese had a headstart. Japanese companies, and not least their banks, learned something from this admittedly bruising experience. Investors and index compilers, not so much.
So, labouring under the false belief that Japan was a basket case, investors have largely missed out on the rally. Worry not, there is still plenty of time and plenty of percentage point returns still left to bank.
The pie chart below shows the composition of the MSCI Asia ex Japan Index, courtesy of MSCI Inc. 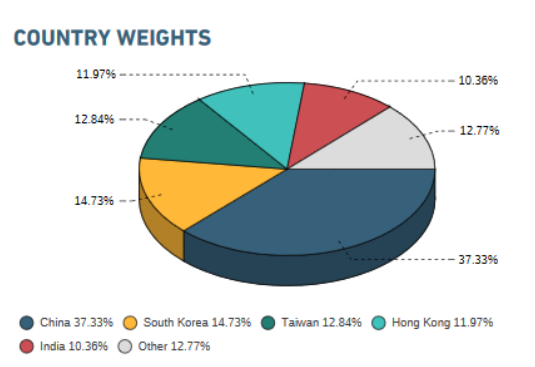 The eagle-eyed will notice a few things about this chart. One of them is that China is predominant.
As an audience member at our Master Investor panel discussion last week asked, aren't there corporate governance issues in China?
A few years ago we sat down with a Hong Kong-based fund manager who made the following observation: if there are 1.3 billion people in China, it is probably safe to assume that 1 billion of them are crooks. (We cannot comment on the veracity of this claim.)
Another is that, being an Asia ex Japan index, the MSCI Asia ex Japan index doesn't contain Japan. This might have made sense when Japan was overvalued in 1989 and heading for a fall. It no longer makes sense when it is arguably the cheapest market in the entire region. (As well as being the third largest economy in the world, irrespective of how quickly its elderly are dying off. Those elderly Japanese are, comparatively speaking, pretty healthy. And Japanese robots are nothing to be sniffed at.)

"One can fly to Japan from anywhere, but from Japan one can only fly to the Third World, and it hardly matters whether one lands in Kinshasa, London, New York or Zurich: they are all places where one must be constantly watchful and distrustful, where one cannot leave a suitcase unattended even for ten minutes, where women strolling home through town at 3am are deemed imprudent, where the universal business model is not to underpromise and overdeliver but if anything the other way round, where city streets are clogged at rush hour because municipal authorities mysteriously fail to provide ubiquitous, fast and comfortable public transport, where shops need watchful staff or cameras against thieving customers, and where one cannot even get beer and liquor from vending machines that require no protection from vandalism. Japan was the world's only really different country when I first visited forty years ago, and it remains so now, despite many misguided attempts to internationalise its ways to join the rest of the world."

So writes Edward Luttwak, reviewing Kenneth Pyle's book Japan in the American Century in the London Review of Books, 4 April 2019. But Luttwak also acknowledges the subtleties throughout the economy, culture and politics of modern Japan under its pragmatic Prime Minister Shinzo Abe...

"...whose tenure since 2012 has been marked by important institutional changes, as well as new policies both foreign and domestic, and an even broader change in the tone of public life.
"The tall and confident son of a foreign minister, grandson of one prime minister and nephew of another, Abe could have served out a stint as prime minister with a bit of image-making and a slogan or two, in the manner of most of his Jimintō predecessors.
"Instead he launched a risky economic policy based on monetary and fiscal laxity that would have caused Mario Draghi and his colleagues at the European Central Bank to commit hara-kiri, instituted a slew of structural reforms that irritated many of his more right-wing supporters by including vigorous support for female career advancement (enlisting his own wife in the cause), and transformed Japanese foreign policy by turning passive dependence on the US into a true partnership.
"[Abe's] Japan now accepts real responsibilities, e.g. to repel any attempt by China to act on its fanciful claim to the Senkaku Islands in the East China Sea instead of begging the Americans to do so, e.g. preserving a dialogue with Putin in order to give him a reason for limiting Russia's support for China (at one point Obama called Abe to try to persuade him to cancel an upcoming meeting, but he didn't budge).
"It was not just a question of asserting personal leadership. To change long-settled habits of passivity, Abe established a National Security Council that is not just a gathering place for representatives of the foreign, defence and intelligence bureaucracies, as in most other countries, but an actual policy-making body operated by its own staff, the National Security Secretariat. It has been remarkably effective from the start, formulating Japan's first post-1945 national security strategy and leading successful negotiations with the Chinese.
"Even after seven very active years, Abe's redirection of Japan's course remains a work in progress: he is still trying to implement the long-desired revision of the constitution that would allow the armed forces officially to do what they are already doing, and still trying to get through the state-funded universal childcare that is the only way to raise fertility, as France and Israel have shown.
"That policy collides with another right-wing priority, because it necessitates letting in child-carers from other countries, something Abe fully accepts, and which is a result in part of his success in increasing female participation in the labour force.
"This is just one of the ways in which his actual policies turn out to be not right-wing but merely pragmatic."

We make no secret of our enthusiasm for the Japanese market, which accounts for roughly one third of our global value fund, the VT Price Value Portfolio. Not because we're suckers for punishment, or because we take a special pride in stubborn contrarianism, but simply because we can recognise compelling value when we see it.
Having survived two decades of depression, Japanese banks now have the healthiest balance sheets in the world. (Eurozone banks, anybody?) Japanese equities now yield more than their US peers, and trade as a whole on a price/earnings ratio of 13x as opposed to 19x for the US. The Samarang Asian Prosperity Fund, our fund's single largest holding, has 57% of its assets in Japan. That compares with the average UK private client portfolio of roughly 3% or less.
Samarang has also just enjoyed its best month on record since launch in November 2012. Notwithstanding that, the fund as a whole sports a p/e of 8x, a price/book of 0.8x, a historic return on equity of 16% and an average dividend yield of 4.6%.
Even in 2019, some surprises can be nice ones.