END_OF_DOCUMENT_TOKEN_TO_BE_REPLACED

IF WE HAVE learned one thing since the dark days of 2008, it's that the central bank bag of tricks is bottomless, writes Dan Denning, co-author of The Bill Bonner Letter.

We should expect nothing less from people who conjure money out of thin air...$22 trillion and counting, through various global quantitative easing (QE) programs.

It prompted a question I asked a speaker at a private event Bill and I attended in Washington, D.C. last month:

Is there any theoretical limit to what a central bank can buy, or how much of it?

As Bill has written, Japan is evidence of that.

But as Bill pointed out, all this intervention never made Japanese investors whole. The Nikkei 225 index, which tracks 225 top-rated Japanese companies, sits at 20,039. Almost 30 years after peaking at 38,915 in December 1989, the index is still 49% off its high. 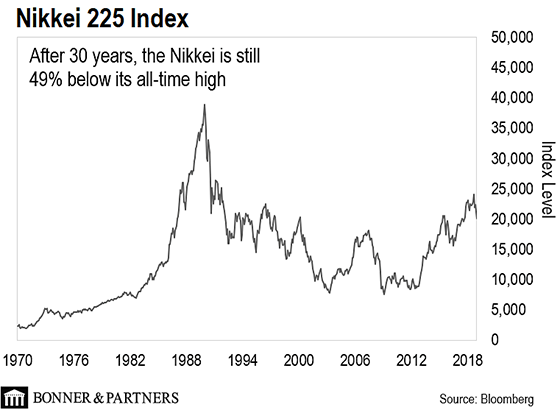 Central bank intervention doesn't only distort prices; it fundamentally alters the incentives for market participants. It becomes perfectly rational for CEOs to borrow money at low rates and buy back their own stock.

Not only does it enrich them personally, it also delivers higher returns to shareholders, at least in the short term.

The academics who dreamed up QE surely never intended for it to work like this...that business owners would spend all their time re-engineering their capital structure rather than, you know, running their business.

But that's the trouble with using interest rates as a blunt weapon in monetary policy. You can make credit cheap. But you can't control where it goes.

This is a preview of what to expect from President Trump and the Federal Reserve in 2019 and beyond.