END_OF_DOCUMENT_TOKEN_TO_BE_REPLACED

WE HAVE IT on superb authority – the Institute of International Finance – that the world is presently $247 trillion in debt, writes Daily Reckoning managing editor Brian Maher.

Were you aware that global debt is rising nearly three times the rate of global wealth?

Meantime, global interest rates remain near record lows – despite recent nods in the other direction.

Never in history has debt scaled such heights...never have interest rates plumbed such depths.

Each fact is remarkable in itself. But taken together?

Today we connect the dots...see how they all tuck together...and tease out the implications.

Richard Sylla professes economics at New York University. He is also co-author of A History of Interest Rates (available through Amazon at a bargain-bin $63 per).

This book canvasses 5,000 years of interest rates...from ancient Babylonia to the glories of Greece and Rome...the Renaissance, the age of empires...all the way through to the 21st century.

Each historical epoch is distinct.

The investigator hunting meaningful comparisons between eras can be easily thrown off the scent...and end down a blind alley.

Yet despite the false leads and dead ends, Sylla believes he's penetrated the mysteries of interest rate cycles throughout history:

"It seems like there is a U-shaped cycle for each civilization."

Beginning at the top left of the "U", interest rates begin a downward cycle.

Civilizations crest as interest rates near the bottom of the "U".

Sylla claims this pattern was visible with Babylon, Greece, Rome.

In each case, Sylla observes "a progressive decline in interest rates as the nation or culture developed and throve."

Böhm-Bawerk declared that the cultural level of a nation is mirrored by its rate of interest: The higher a people's intelligence and moral strength, the lower the rate of interest.

(Caveat: We speak here of market interest rates – before central banking in its current form.)

They know the solution...

The gods begin to tinker with man's interest rates.

Rates start rising off the bottom of the "U", up the right side of the slope.

The burden of accumulated debt rises with them.

In this manner, each civilization Sylla studied "declined and fell."

The message, clear as gin:

The year is 2018. Interest rates have begun to rise recently – if slowly – and haltingly.

They still remain at lows unseen in recorded history, besides a brief spell during the Great Depression: 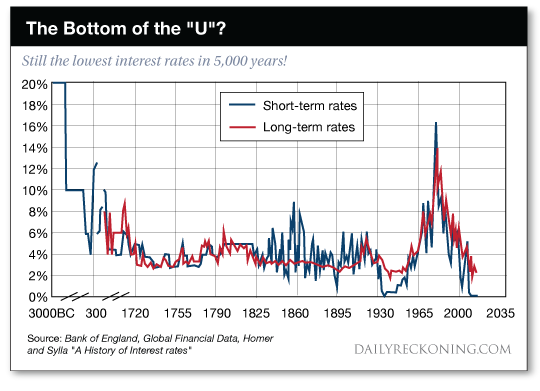 But all cycles end...and history will not be forever put off.

Rates will return to "normal" one day.

If rates rise meaningfully in the years to come, is civilization in for a sharp "decline and fall" as befell civilizations past?

We might say that our current low interest rates indicate that we're at one of the high points of our civilization. Maybe things will get worse from now on.

Recall that civilizations gorge on debt in a falling rate environment...and collapse under that debt as interest rates rise.

US interest rates have been in steady decline since their 1981 peak.

Meantime, the national debt has exploded: 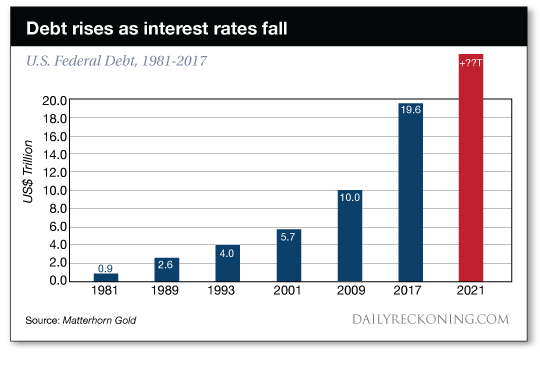 Today the national debt runs to $21 trillion – and counting.

How will America service that debt if rates return to historically normal levels?

We hadn't the heart to run the numbers. Financial analyst Daniel Amerman did:

If interest rates do rise to historical levels and their relationship to civilization holds true...

Perhaps we should all light a candle for civilization.