END_OF_DOCUMENT_TOKEN_TO_BE_REPLACED

What US infrastructure means for base...
AFTER MUCH much anticipation, the US House approved a bipartisan $1.2 trillion infrastructure spending package, writes Frank Holmes at US Global Investors.
Although no single lawmaker got everything they wanted, I believe this bill – now sent to President Joe Biden's desk to sign – is generally constructive news for the metals and mining industry. It will be tasked with supplying the critical minerals necessary to build and improve the nation's roads, bridges, ports, power grid and so much more.
First let's look at what's in the bill.
Some $517 billion will be deployed over 10 years, with roads, bridges and highways receiving the largest portion at $110 billion. According to the White House, the $40 billion set aside for bridges is the single largest bridge investment in the US since the Eisenhower Administration.
Passenger and freight rail projects come next at $66 billion, followed by power infrastructure and broadband infrastructure at $65 billion each. Water projects, public transit, airports and ports and waterways will also receive new funding, as will new electric vehicle (EV) charging infrastructure. 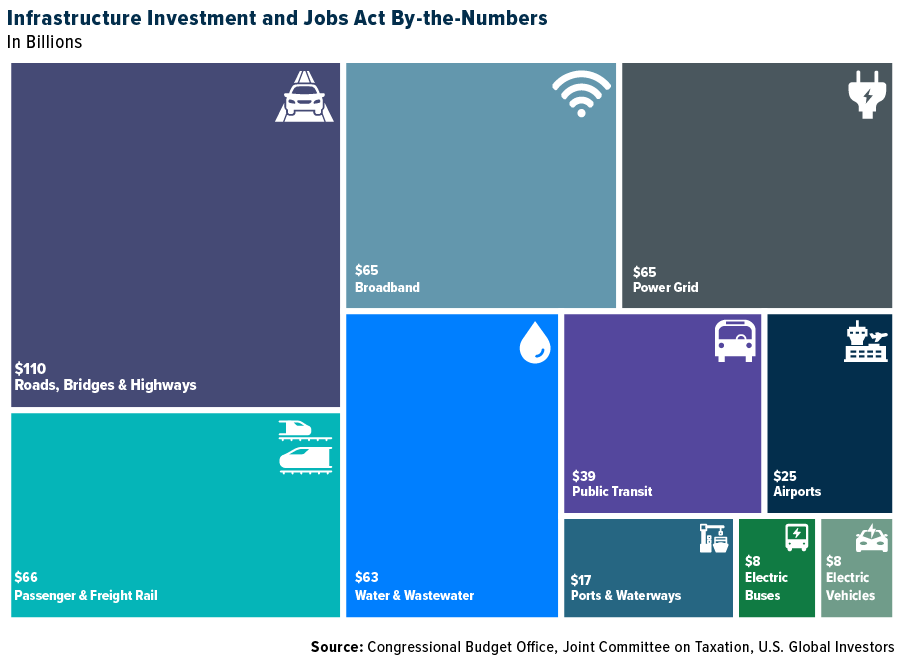 Applications for funding may not be approved for several more months, but already the spending package is being compared to past major infrastructure programs such as the transcontinental railroad and Interstate Highway System.
That said, I believe this could be a catalyst for significantly higher prices for metals and other raw materials, meaning now may be the time to get exposure to the mining industry as well as refiners and manufacturers.
In a recent note to clients, Morgan Stanley analysts said the biggest recipient materials of a core infrastructure package would be cement, aggregates (sand and gravel) and finished steel products such as rebar. According to the bank's estimates, a $1.5 trillion infrastructure plan would translate to incremental steel demand of 75 metric tons over 10 years. That could be good news for iron producers like BHP and Anglo American.
Although the infrastructure bill seeks to put the US on track for net-zero carbon emissions by 2050, there's really no substitute at the moment for cement and steel, the production of which emits great amounts of carbon into the atmosphere.
In fact, a move to decarbonize inevitably means, paradoxically, that more metals must be produced through scaled-up mining. As I've shared with you before, EVs require six times the amount of minerals on average, such as nickel, copper, cobalt and lithium, as traditional internal combustion engine (ICE) vehicles.
Take a look at the chart below. An offshore wind farm uses nine times as many resources as a natural gas plant, according to the International Energy Agency (IEA), with some 8,000 kilograms of copper needed to produce just one megawatt of power. 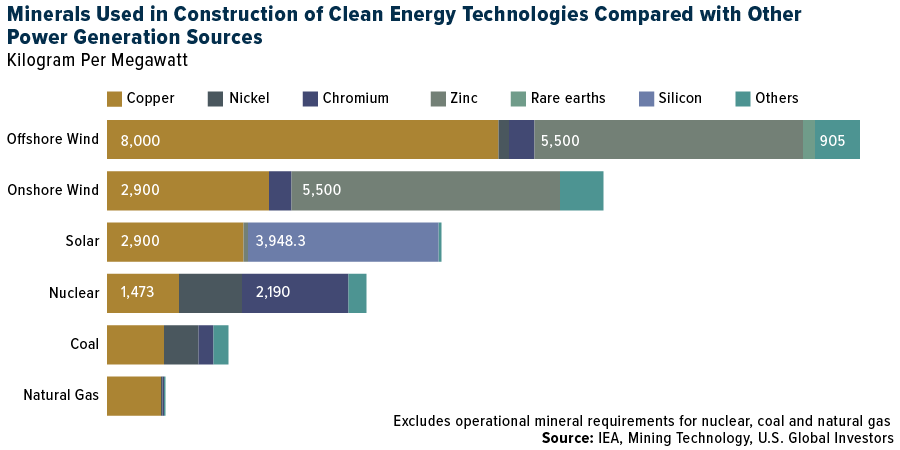 We believe that our Global Resources Fund is well-positioned for a potential boom in commodity prices due to increased demand for infrastructure needs. We seek to select companies that produce the minerals that we believe will benefit the most from higher construction spending.