END_OF_DOCUMENT_TOKEN_TO_BE_REPLACED

Just where does inflation come from – outer space, perhaps...?

NOBODY LIKES INFLATION, writes Aaron Krowne of ML-Implode, but inflation is a "fact of life" – a natural disaster, like a hurricane or earthquake.

Wrong. That is the impression policy makers and politicians have worked very hard for almost a century to create. But it is a bold-faced lie, meant to deflect your attention (and anger) away from the real culprit – them.

Sure, prices can rise in one area for natural reasons (such as crop failure), but prices must then go down in other areas. Because money that would normally be spent in them has to go to the area with higher prices.

The US government has a policy of continually creating more money every year, through an independent, private corporation, called the Federal Reserve. It is neither Federal, nor are there any meaningful "reserves". It has a total monopoly on the US money supply. The Fed has virtually no accountability to the public, except what it chooses to tell us.

Today the Fed finds it more convenient to pretend inflation comes from elsewhere (outer space, perhaps?). Yet it was actually created specifically to regularly expand the money supply ("print" more money). The argument was that this would "help growth" by making capital more available, and allow the authorities to "smooth over economic downturns."

They claimed they could retain the value of the Dollar, with careful management, and maintain "full employment". So they inflated the money supply on purpose.

How have they done, since 1913, when the Fed was created? The value of the Dollar has been almost completely destroyed. The following chart shows the Consumer Price Index. As it rises, higher prices means each US Dollar is becoming less valuable. 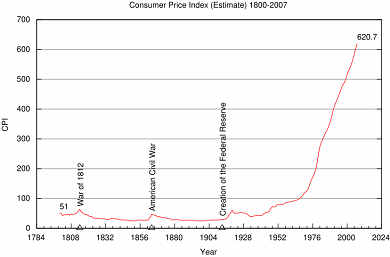 That's right, the Dollar actually gained value from 1800 to 1900. Then the Fed came along.

What has happened since 1913 has proven that, whatever the supposed benefits of inflation AS A POLICY CHOICE, the hazards are much worse.

Why did all of these ills happen? Because:

An inflation rate of just a few percent is enough to achieve all of these ills: at only three percent inflation per year, $100,000 shrinks to $40,100 in purchasing power in thirty years. At 5.5% inflation (which is likely closer to the true rate of inflation from 1980-2006), it takes only a bit over sixteen years to get there.

"Lenin was certainly right," as John Maynard Keynes – one of the two most influential economists of the 20th century – once noted. "There is no subtler, no surer means of overturning the existing basis of society than to debauch the currency.

"The process engages all the hidden forces of economic law on the side of destruction, and does it in a manner which not one man in a million is able to diagnose."

Why do governments like an inflationary system? Because it allows them to spend more money than they earn in tax revenues. In our version of the system, this is done by financial borrowing first (rather than literal "printing"), with the visible inflation following years later, making it difficult for the people to connect cause with effect.

In other words, instead of taxing you right now to spend right now, they tax you (and your children) later for today's spending, thinking you won't notice. The "tax" comes in the form of decreased purchasing power of your money, so it never has to be debated or pass through congress. This scam usually works!

"It is my view that what is important is cutting government spending, however spending is financed," believed Milton Friedman, the other most influential economist of the 20th century. "A so-called deficit is a disguised and hidden form of taxation. The real burden on the public is what government spends (and mandates others to spend)."

The government lies about inflation to make it appear like they are doing a better job than they really are. Here's how they do it.

First, the main inflation measure, the Consumer Price Index (CPI), is heavily manipulated. Among the manipulations are "hedonic adjustments", which mean the government assumes your computer is only half as expensive if becomes twice as fast; "substitution effect" assumptions, which means the government assumes there is no change in costs if steak becomes so expensive that you have to switch to hamburger; and selective weighting, through which major expenditures like health care are grossly under-represented.

Focus is then diverted from the CPI to the "core" CPI, which leaves out food and energy, for no good reason. Nowadays, this is causing the "core" CPI to look increasingly ridiculous.

The government also pretends that asset bubbles (such as in stocks or house prices) aren't inflation. The problem with that logic is that when asset bubbles "pop", much of the money pours out of the effected markets and becomes good old goods and services inflation, showing up in the CPI.

If you believe the US Postal Service, costs have gone up about 5.5% a year from 1980-2006. But if you believe the Bureau of Labor Statistics (BLS), which calculates the CPI, costs only went up 3.2% over that time period. If the 5.5% number (which is based on USPS expenses, as represented by first-class postage) is right, that means that pensioners (people on social security) are being underpaid by at least 42%. In reality, the situation is likely even more extreme, given all the other points mentioned above.

How can inflation be avoided? The answer is simple: sound money – money backed by something with real, constant value, just like we used to have before the Fed. Historically, that "something" was Gold and silver, in the form of notes exchangeable for them, and also usually coins made specifically of them, which have intrinsic value.

In fact, only sound money can really claim to be "money", because one of the main attributes of money is that it retains its value! Paper money (also called "fiat") is actually only currency – good only for one-off exchange. It is backed by nothing (except promises to provide future paper money).

The only way this crazy fiat money system could have been put in place over honest, hardworking Americans is deception. While our current pure-fiat Federal Reserve Notes started being issued in 1914, Gold and silver-backed Treasury notes were not withdrawn until later (1933, and 1964, with the last silver certificates accepted for exchange in 1968. The last coinage containing silver was in 1964).

So the sound money system was gradually phased out, with the American public playing the role of the proverbial "frog boiling in water".

The kind of sound money we used to have. Compare the wording to a Dollar from your wallet.

Sound money with Gold and silver is the system that always arises naturally—unless government forces and fools people into accepting their paper promises along with the demon of inflation. After all, would you knowingly accept a piece of paper and a promise (for more pieces of paper) from a politician or a slick Wall Street banker in exchange for real goods or services...unless someone was forcing you to do so at gun point?

We didn't think so.

And while you may have to accept fiat money (currency) in payment for work or trade right now due to the law, they can't make you use the stuff for savings. Luckily, you can put your money into Gold and silver. Ownership of Gold was re-legalized for Americans in 1974 (FDR "took the right away" in 1933 to help impose paper money.