END_OF_DOCUMENT_TOKEN_TO_BE_REPLACED

And so they tend to blame the producers of goods and services for higher prices – rather than the money-creating government that is the true culprit.

Make no mistake; as government spending continues on a steep ascent, piling up debt, there is no question that the government has to continue creating money like there's no tomorrow. This situation is not unique to the United States. Quite the opposite, in fact. The adoption of fiat monetary systems is now universal.

The results of over three decades of unhindered monetary creation are increasingly being felt in a rising tide of price inflation, whether it be the 7.4% increase in producer prices reported by the US in the most recent quarter, or the news just out of China that consumer price inflation now tops 8% and is worsening...or, in the most extreme example, Zimbabwe, where the utter lack of restraint by an insane dictator now burdens that economy with an inflation rate of over 100,000% annually.

To get a better sense of things, Casey Research recently conducted a survey of the world's top 30 economies, broken down on a region-by-region basis. The snapshot below offers a glimpse at the big picture. 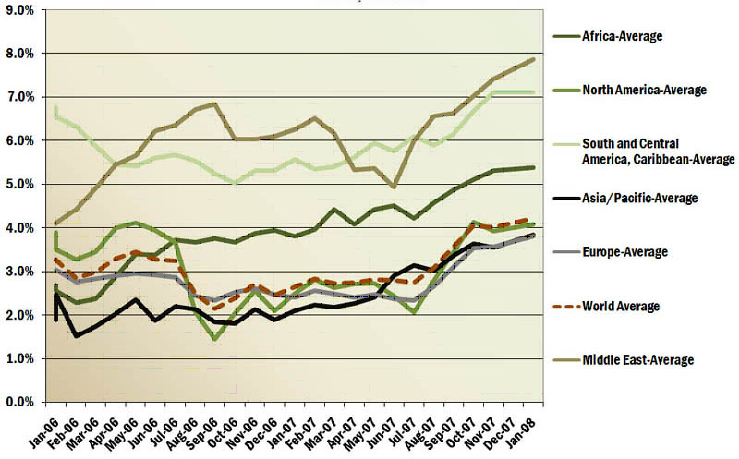 Most pundits focus on commodities as a central culprit in today's higher price inflation. Why are commodity prices rising? There are many reasons, most importantly: supply and demand fundamentals, speculation and a weakening US Dollar, the "universal currency" in which oil, Gold and many other commodities are priced.

Of those factors, supply and demand and speculation are fairly fluid. Which is to say they can vary over time based on politics (a threat to cut off oil sales by Venezuela, a war in the Middle East, legislation favoring bio-fuel production) or for more technical reasons (power shortages impacting mining in South Africa, or the shutdown of the Gulf of Mexico during a hurricane).

This relatively short-term variability largely neutralizes the value of these factors as predictors of future inflation. Simply put: who can know the unknowable?

Instead, we look to longer-term trends. In that regard, two are apparent. The first has to do with the concept of "peak" commodities. While it has been Marion King Hubbert's theory of Peak Oil that has received the most attention, credible arguments can also be made for peak metal (the dearth of major new discoveries), and even peak food. While these arguments have merit, they were beyond the scope of our survey, other than noting them as potentially rising in significance over time.

The second long-term trend is, in our view, of immediate consequence and worth a more detailed discussion: per above, the limitations and risks inherent in the fiat monetary systems now in universal favor around the world. It is this fiat monetary regime – the attempt to manage monetary policy based on flexible guidelines, and without the anchor previously provided by a gold standard – that we believe is the single most important driver of the rising price inflation now apparent around the world.

Simply, while the central banks of a handful of countries are (just) managing to contain inflation through restrained monetary and fiscal policy, the vast majority are finding the task politically inexpedient and are losing control. While we may point with some well-deserved derision at Mr. Mugabe's comedic attempts to paper over his inflation with yet more paper, all nations are currently making the same errors, albeit at differing levels of failure.

To understand this point, we share a simple but accurate way of thinking about inflation as the result of too much money chasing too few goods. On that front, the chart just below paints a picture of the largely unfettered global growth in money since the early 1970s plotted against industrial production, a proxy for "goods" in their many varieties. 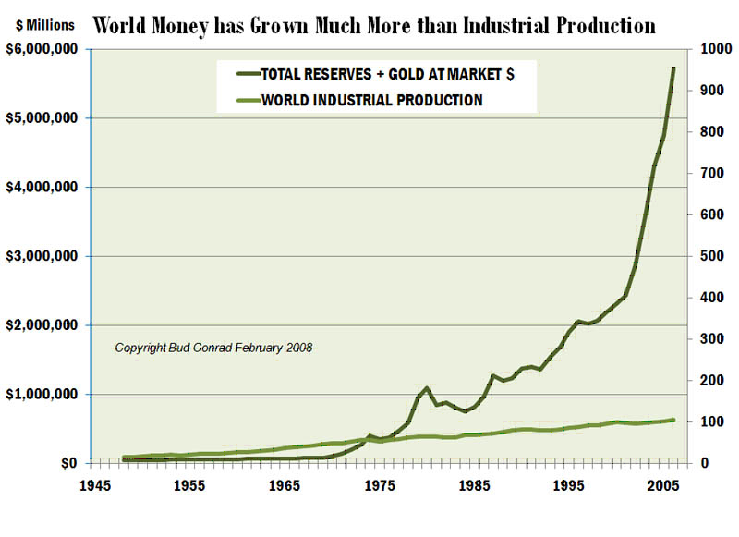 Now we're beginning to get under the hood of the problem, but one further view is necessary to understand what happened in the early 1970s that unleashed the tidal wave of money.

The chart below presents a ratio of the above two measures, and includes a marker indicating President Nixon's canceling of the link between the US Dollar and gold in 1971 as the likely trigger. Once this anchor was removed, all that remained was a pure fiat monetary system.

While canceling the gold standard was a US policy decision, its impact was felt around the world. That is because of the historic Bretton Woods agreement struck between representatives of over 40 countries in 1944, as World War II came to an end. 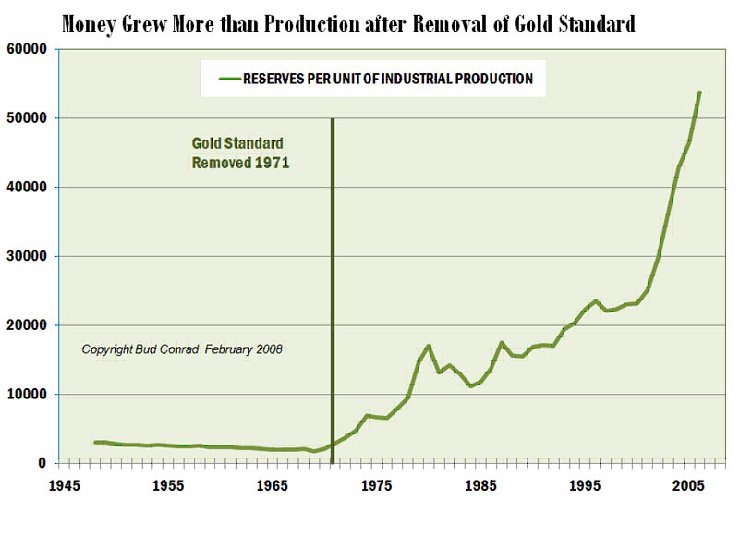 New institutions, including the International Monetary Fund and the International Bank for Reconstruction and Development, were fathered at Bretton Woods, but they were nothing more than enforcers for the new regime, ensuring that the other countries stayed in line, buying and selling dollars as needed to maintain a stable peg.

For its part, the US guaranteed Dollar convertibility at a Gold Price of $35 "forever".

But as is inevitable when dealing with governments, "forever" really means "for as long as it is politically expedient." When it became inconvenient, in the late 1960s when the French under Charles de Gaulle decided that they'd prefer to have the Gold, Nixon canceled convertibility.

Once President Nixon canceled that convertibility, which took effect in August 1971, the world's central bankers – left with no other immediately obvious or more viable alternative – continued using the US Dollar as a key component of their reserves. The greenback also continued to be used in international trade, to price globally traded commodities, such as oil.

Yet the end of gold convertibility represented a fundamental change; from that point forward the creation of US Dollars and, by extension, all of the world's currencies, was restrained by nothing more than political expediency.

It is our contention that the size of the politically motivated governmental spending, spending which has no "hard" limiting factor or defined discipline, will continue apace and, in fact, significantly worsen due to compounding interest on government borrowing and the coming wave of irrevocable social commitments – on Social Security and Medicare in the US, for example.

Against the backdrop of a global fiat monetary regime, the only limitation to government spending is that which the politicians believe will be politically unacceptable to a population. This is, generally speaking, no real limitation at all, given that the public is now apathetic about, and numb to, the real world implications of large numbers.

Inflation Baked in the Cake

In light of the cause and effect between monetary inflation and price inflation, and given the clear findings in our Global Inflation Survey, we can only conclude that inflation in both its commonly understood forms is now baked into the proverbial cake.

As investors, that keeps us focused on gold, the world's longest-serving form of money and an investment we have been profitably beating the drum about since 1999. Importantly, a quick scan now finds that gold is rising against a large number of currencies. This is a very useful view of the current inflation trend in that it demonstrates that the trend has expanded considerably beyond just a weakening US Dollar, and is now affecting fiat currencies around the world, almost without exception.

Are we seeing the end of the experiment in fiat monetary systems? It's too early to say one way or another, but it's not too late to shift at least some percentage of your portfolio into physical Gold Investments and, for leverage, gold shares.

The above was excerpted from the Casey Research Global Inflation Survey. The full 38-page survey, which includes commentary by Casey Research chairman Doug Casey – and an interview on the inflation/deflation debate with Casey Research's chief economist Bud Conrad – is available on request here...