END_OF_DOCUMENT_TOKEN_TO_BE_REPLACED

And you thought too much easy money was just bad for your savings...!

HMMM...Let's see, says Dan Denning, down in Melbourne, for The Daily Reckoning Australia.

Last time mining giant BHP Billiton made a tilt at a high-profile, big money acquisition, the whole world went pear-shaped. As the statisticians say, correlation is not causation. But merger and acquisition activity (M&A) seems to pick up when company directors have run out of other ways to increase earnings. It does not always work out well for shareholders.

Case in point? BHP's shares closed down 3.5% on the news.

In case you missed it, Marius Klopper's mining and minerals outfit made a $43 billion bid for Canadian firm Potash. The bid values the world's largest fertilizer producer at $130 per share. That's a 16% premium to Monday's closing price. It's also nowhere close to what Potash thinks it's actually worth.

Potash CEO Bill Doyle told Bloomberg that the bid was a, "highly opportunistic and an ill-disguised attempt to exploit an anomaly in the equity market valuation of Potash Corp." Tell us what you really think Bill. Analysts say a bid north of $150 per share more accurately values the company.

As pick-up lines go, you'd have to say BHP's first attempt – what's a nice Canadian fertiliser company like you doing in the blue light district of the share market – was a failure. So the bid has gone hostile with BHP set to appeal directly to Potash shareholders. But they say every man has his price, and there are two interesting parts to this news – aside from the valuation mating dance.

The first is the timing. This would be the biggest merger since 2009, when Merck went after Schering Plough. Mergers don't always come at market tops. But there does seem to be a few cases of CEOs riding high on confidence prior to making an acquisition that destroys shareholder value (AOL-Time Warner). And don't forget the proposed BHP-Rio Tinto stitch up became public at the apex of commodity prices.

The second interesting part to this news – which hits us especially hard right before lunch – is that it's about food. Potash is used to increase crop yields. It's the potassium that does it. Incidentally, potassium has the chemical symbol "K" on the periodic table which comes from the Latin "Kalium" which itself apparently comes from the Arabic "al-kali," or plant ashes. 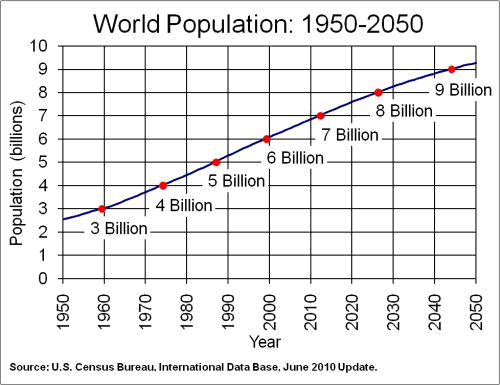 A lot of those people are in this part of the world, the Eastern hemisphere. They are all just as hungry as people in the West, you would presume. And if you'll indulge us for a second, there's an intriguing point to be made here:

It makes perfect sense when you think about it. Because if the creation of money out of thin air, not backed by anything, accelerates the use of land, labor and capital, why would food be any different? If you bring forward housing demand, say, by making grants and keeping credit cheap, aren't you "bringing forward" people with cheap money and cheap energy? And aren't you accelerating the depletion of arable land by increasing the demands upon it because of the "brought forward" population...?

This reveals the central and egregious blunder of the Keynesians. You enjoy the short-term gain without thinking of the long-term pain. Any kind of artificial stimulus that makes things appear easier now usually makes things worse later. You rob from future demand and you usually accelerate the misallocation of capital (such as giving everyone A$900 to spend in a country with one of the highest household-debt-to-disposable-income ratios in the world, for instance).

Inflation also stimulates an unhealthy appetite. It makes you fat – right before it starves you. By the way, one reader asked us to show China's population pyramid. As you know, China is the source of so many projections about future Aussie corporate profits, jobs, and government taxes. 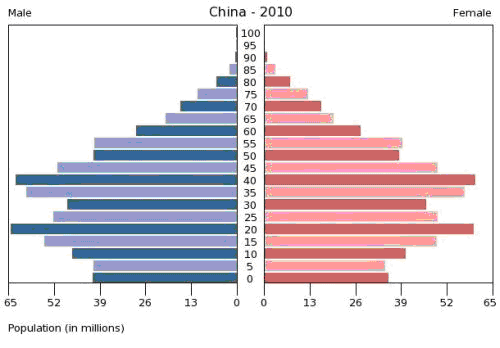 Whaddya reckon? It's not a big fat base. In fact, it reminds of a warning we heard about China a few years ago:

China will grow old before it grows rich.

But even though the base – in comparison to the middle – is narrower, the total numbers are incredibly large. It will be intriguing to see how it pays out. Will China's numerically large middle class be able to foot the bill for the health-care needs of ageing population? Or will the one-child policy become a no-grandparent policy?
One thing to remember about China: it's 5,000 year old civilization currently being "run" by an ideology with a very short and bad track record for economic management.

We reckon old traditions, like caring for and respecting your elders, will win out over putting a bullet in their head to save on health-care costs. But modern fascism and nationalism are pathogens infecting the human spirit. This is probably true of most politics these days. Once they take hold in the mind and the heart, they have a way of making people do (and justify) idiotic and often monstrous things. This is why the modern Warfare/Welfare State is dis-integrating before our very eyes. It's running out of resources to consume in an unproductive way. It's inefficient in redistributing the productivity of the private sector. And at its black heart is infected my envy, sloth, malice, and a lust for power. So unhealthy.

Do we exaggerate? Not by much, if it all. Elections always demoralize us, Australia's no less than usual. Thank goodness we can get back to being upbeat next week.

Get the safest gold at the lowest prices by using BullionVault now..