END_OF_DOCUMENT_TOKEN_TO_BE_REPLACED

The inflation/deflation debate rages on. But why...?

The INFLATION/DEFLATION debate is now the 'topic du jour' and although we have discussed this issue in the past, we want to throw more light on this very important subject, writes Puru Saxena of PuruSaxena Wealth Management in Hong Kong, China, for the Daily Reckoning.

Today, many prominent economists (Nouriel Roubini, David Rosenberg and Paul Krugman) and fund managers (Bill Gross and Jeremy Grantham) are forecasting deflation and according to these folks, a deflationary contraction is now 'baked in the cake'. In fact, these deflationists are extremely worried about the ongoing private-sector debt-deleveraging in the developed world and they are also concerned about the lack of aggregate demand in the industrialized nations. Bearing in mind these two factors, these prominent people believe that deflation is now almost guaranteed and inflation is out of the question.

On the other end of the spectrum, and in stark contrast to the deflationist camp, many prominent market participants (Paul Tudor Jones, John Paulson, Jim Rogers, Marc Faber and Peter Schiff) are now warning about high inflation or even hyperinflation. According to these people, the large fiscal deficits and massive debt overhang almost guarantee runaway inflation.

It goes without saying that such conflicting views are extremely strange when you consider that all these highly experienced and successful people are reviewing the same economic data! Well, everyone is entitled to their opinion, but as far as we are concerned, deflation is an urban myth and the global economy will have to contend with very high inflation.

Now, if you reside in the deflation camp and believe that inflation cannot occur in a weak economic environment, you need to visit Zimbabwe and meet Mr. Mugabe who will explain how you can create hyper-inflation at a time when a nation is facing an economic depression! Whether you like it or not, Zimbabwe's hyper-inflationary saga clearly shows that despite a huge output gap, surging unemployment and a bankrupt economy, reckless policymakers can succeed in creating massive inflation.

Look – we do acknowledge the fact that the economies of the developed world are struggling and they will probably remain weak for several years. We also accept the fact that the aggregate demand in these troubled economies will stay well below the available capacity (output gap). However, contrary to the deflation camp, we totally respect the money-creation abilities of the central banks. Accordingly, we firmly believe that in order to avoid sovereign defaults in the near-term, the Federal Reserve and the European Central Bank will create unprecedented inflation.

Already, short-term interest-rates in the US and in Europe are at extremely low levels and real short-term interest-rates are negative. If such a loose monetary policy fails to create inflation, you can bet your bottom Dollar that these central-banks will unleash even more rounds of 'Quantitative Easing'. Needless to say, such reckless monetary-inflation will dilute the existing money-stock even further and reduce the purchasing power of money. Okay, enough about the inflationary bias of the public-sector, let us now move on to the private-sector.

Whilst it is true that the private-sector in the US did experience deflation (contraction in debt) for a brief period of time, it is notable that this 'austerity' did not last very long! Figure 1 shows that US commercial-bank credit bottomed out earlier this year and since then, it has risen by roughly US$400 billion. So, it should be clear to all observers that the private-sector in the US is no longer de-leveraging and this is inflationary. 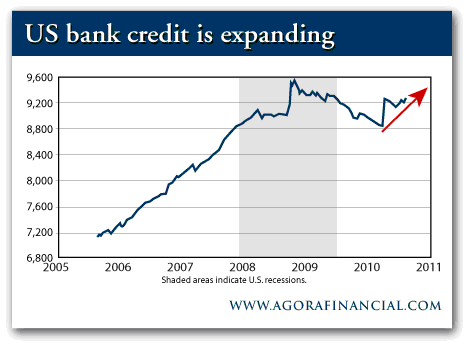 Furthermore, we would like to point out that even though commercial-bank credit in the US contracted between October 2008 and March 2010, during that period, America's federal debt went through the roof!

Ironically, during the time-frame when American households and corporations were tightening their belts, the US-Treasury borrowed almost US$2 trillion; thereby stopping deflation in its track. The truth is that at no point during the recession did total debt (private-sector plus federal) in the US contract, so deflation did not occur. Now, it is conceivable that the private-sector in the US may abruptly start repaying its debt again. However, if such a debt-contraction occurs, Mr. Bernanke will create money like there is no tomorrow.

Today, America's total liabilities (including social security, Medicare and Medicaid) are around 800% of GDP and federal debt has climbed above 90% of GDP (Figure 2). Given the fact that deflation will increase the real value of this debt, you do not have to be a brain surgeon to figure out that before the US government declares bankruptcy, it will desperately try and inflate its way out of trouble. By unleashing another 'stimulus', Mr. Obama's administration will try and maintain nominal GDP growth, so that nominal incomes and tax receipts are sufficient to service the outstanding debt. 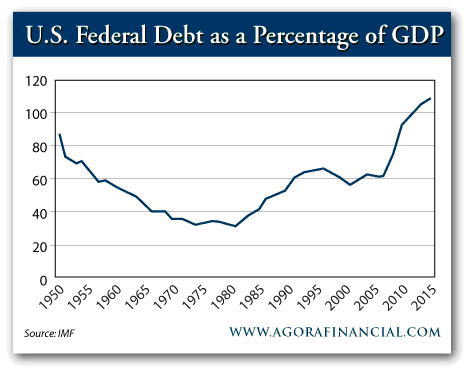 It is interesting to observe that in order to fund its spending binge, so far the US administration has succeeded in borrowing huge amounts of money at low interest-rates.

It is notable that up until now, demand for US Treasuries has been strong and the US administration has not had much trouble raising money. Perversely, in today's volatile economic environment, US government debt is still viewed as a safe haven. However, every good thing comes to an end and investors' perception could change at short-notice. When that happens and the bond market starts to focus on America's ballooning deficits, demand for government-debt will dive. At that point, the Federal Reserve will have no option but to create new money so that it can lend it to the US Treasury. In fact, the Federal Reserve has already announced that it will use the proceeds from the sale of its mortgage-backed securities to buy US Treasuries. In our view, this is only the beginning and outright asset-monetisation will intensify over the following years.

Throughout history, periods of massive money-creation have always been inflationary and this time should be no different. Over the following months, if the economies of the developed world take a turn for the worse, you can be sure that the respective policymakers will respond by creating copious amounts of paper money.

If you still believe that deflation will prevail, perhaps you should review the table below, which highlights the inflation rates in various countries. It is noteworthy that the inflation rate depicted here for each nation is in fact the Consumer Price Index (CPI), which significantly understates the price increases within an economy. Let there be no doubt that the majority of government agencies make seasonal and hedonistic adjustments to bring down the level of the CPI. Regardless, you can see that despite such 'feel good' adjustments to bring down the reported 'inflation' rate, every nation (except Japan) is currently experiencing 'inflation.' 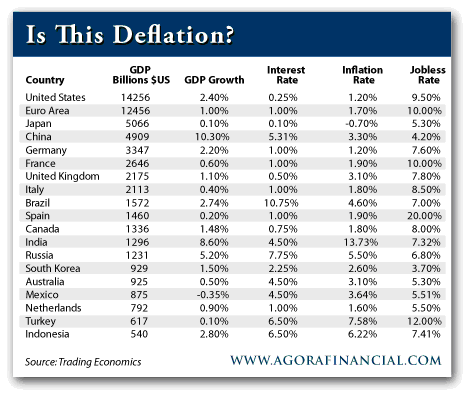 Bearing in mind this compelling data, we are left wondering how anybody can get hoodwinked by the deflation hype!? Perhaps, the deflationists know something the rest of us do not, but at this point, hard data does not support the deflation thesis.

Given the inflationary environment we find ourselves in, we do not like cash or fixed-income securities. In our view, both cash and bonds will lose considerable real value over the following years and the ongoing strength in the government bond-market may turn out to be an exceptional selling opportunity. Conversely, we maintain our view that precious metals, energy and the stock markets of the fast growing developing markets in Asia will provide stellar returns in this inflationary environment.

Buy Gold at the lowest prices and store it – for $4 per month – in the very safest locations using world No.1 BullionVault today...