END_OF_DOCUMENT_TOKEN_TO_BE_REPLACED

Defining inflation and its impact on the economy, investing and wealth...

Inflation is the easiest way for any government to confiscate the savings of the public. For generations, wealth has been transferred in this manner.

Remember, money is supposed to be a store of value. But due to reckless central bank-sponsored inflation, it can no longer fulfill this critical role. Unfortunately, nobody questions the inexplicable loss of the purchasing power of their savings. Thus central banks get away with financial murder.

Inflation distorts the economy, and it brings great harm to the public. Inflation encourages speculation and mindless risk-taking. In fact, inflation acts as a poison for retired people, since they are no longer able to earn more money in order to maintain their standard of living. Thanks to inflation, most senior citizens are unable to enjoy the fruits of their labor.

Allow us to explain this subtle yet critical difference. For the sake of simplicity, let us assume that America's money-supply is $100, and this is the amount available to buy the five oranges its economy produces. Common-sense dictates that under this situation, each orange will cost $20.

Now, let us introduce a banking-cartel called the Federal Reserve, which is able to extend credit (via its debt-based fractional reserve banking system), thereby inflating the supply of money within America ten times over to $1,000. Under this scenario, with a 10-fold increase in money available to purchase the same amount of produce, each of the five oranges will now cost a whopping $200!

An orange is still an orange; it does not change. What changes is the purchasing power of the paper money that is used to buy that orange. And hopefully, you can see from the above example, very simplified, how an inflation in the supply of money and debt causes prices to increase within an economy.

Furthermore, in its attempt to manipulate the masses, the establishment does everything in its power to suppress the official 'inflation barometer'. Governments achieve this goal by shamelessly doctoring their Consumer Price Index (CPI) and Producer Price Index (PPI) calculations via various seasonal and hedonistic adjustments. The chart below highlights the discrepancy between the CPI-U published by America's Bureau of Labor Statistics and the SGS Alternate CPI, which is calculated by Shadow Government Statistics using the old methodology.

And as you can see, over the past 20 years, prices have been rising much faster than the officials would have you believe. 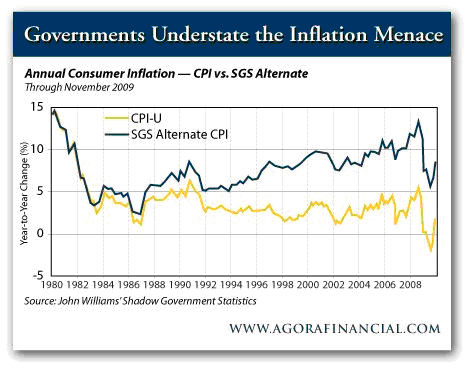 Let there be no doubt, inflation is a total disaster and our world will be a better place without this reckless money-creation.

Contrary to official dogma, our world experienced tremendous progress during the 19th century, and there was no inflation during that period. The chart below shows the changes in America's Consumer Price Index (CPI) over the past two centuries. As you will observe, the CPI fell for most of the 19th century as the purchasing power of the American currency rose.

However, since the formation of the Federal Reserve in 1913, the CPI has exploded causing the purchasing power of the US Dollar to spiral downwards. 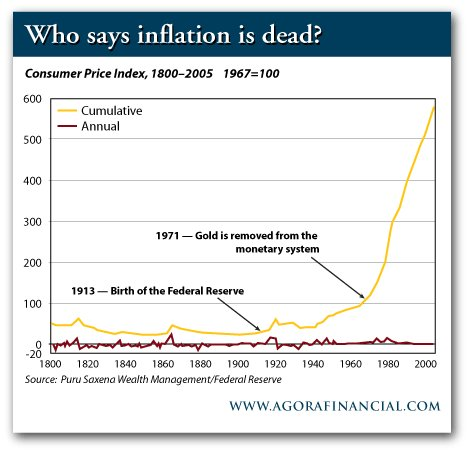 Given the fiat-based monetary system and banks' vested interest in expanding credit, we have no doubt that most nations will experience very high inflation over the coming decade. Accordingly, we suggest that long-term investors protect their purchasing power by allocating capital to precious metals such as Gold Bullion, commodity producers and fast-growing businesses in the developing world.