END_OF_DOCUMENT_TOKEN_TO_BE_REPLACED

The world's first 100 trillion dollar-bill, courtesy of hyper-inflation in Zimbabwe...

THE RESERVE BANK of ZIMBABWE just announced that it will issue a new set of notes, writes Mike Hewitt of DollarDaze, to include a 10 trillion, 20 trillion, 50 trillion and 100 trillion denomination.

One commentator says these notes will be introduced to "keep pace with the hyperinflation that has caused many to abandon the country's currency." Which makes about as much sense as a doctor saying he will give his patient a larger dose of heroin to battle his addiction to the drug.

The Reserve Bank of Zimbabwe (RBZ) is not battling some mysterious external force depreciating the Zimbabwe Dollar. The currency is plummeting in value because the central bank is increasingly issuing more of it. These trillion-dollar notes will only further exacerbate the situation. 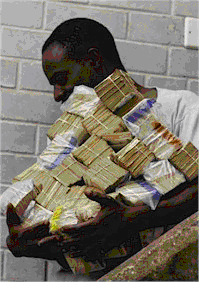 The currency's value soon began its rapid erosion, however, with hyper-inflation beginning around the middle of this decade.

And as expected, the ZWD continued falling in value accordingly. To enable small purchases – such as groceries – the $50 billion note was issued by Zimbabwe's central bank in June 2008. Then central-bank governor Dr. Gono announced on July 30th that the Zimbabwean Dollar would again be revalued.

Effective August 1st 2008, 10 billion of the new ZWD was worth just one of the very new Zimbabwe dollars. But slashing the volume of dollars in circulation by 10,000,000,000 was again followed by only more hyper-inflation.

In Nov 2008, Dr. Gono issued the following statement in a press release:

"The invisible forces of destruction have been unmasked, marking a turning-point chapter when the fraudulent and speculative winds are cast into the inferno of extinction..."

The reason for Zimbabwe's economic woes according to the press release was that the Zimbabwe Stock Exchange (ZSE) had become the "epicentre of economic destruction" by allowing stock brokers to bid up stock values. In a statement clearly meant to deflect blame from the Zimbabwean government onto the financial sector, Dr. Gono provided the following 'insight':

"Where share prices were rising at the ridiculously bloated rates, what that effectively meant was that someone could work up with no penny at the bank, but end the day a multi-trillionnaire. The next morning, the false wealth so created would show up as high demand for cash, and all this being blamed on the central bank."

It's true that Zimbabweans, in an effort to preserve their wealth, rushed into the ZSE. It returned 300,000% in 2007. But while that may seem good on the surface, the reduction of value for the ZWD more than offset any capital gains, with prices for goods and services increasing at an annualized 231 million per cent according to official government estimates (231,000,000% per year).

The doors of the ZSE have remained shut since closing for Christmas 2008. The hyper-inflation of Zimbabwe's currency – and the collapse of its economy – continue.

History is littered with many failed currencies, completely destroyed or revalued by the practice of over-issuance. Hyperinflation results in widespread poverty, high unemployment, mass emigration and complete or near collapse of the social order. The RBZ's monetary policy of funding government expenditures by printing additional money presents this century's first example of the inevitable consequences of hyperinflating a nation's money supply.