END_OF_DOCUMENT_TOKEN_TO_BE_REPLACED

Is monetary policy really as effective as some economists say...?

IN HIS VARIOUS speeches and utterances, Ben Bernanke, the Chairman of the Federal Reserve, has given the impression that the central bank's monetary policy remains a very powerful tool to steer the economy away from serious economic slumps, writes Dr Frank Shostak for the Cobden Centre.

Equally, monetary policy can also be very effective in preventing the economy from entering an "over heating" phase – monetary policy, if set expertly, can keep the economy on a stable growth path with a moderate unemployment rate and a moderate rate of inflation, or so it is held by many economists.

Note again that in this way of thinking by means of suitable monetary policies the US central bank can keep the economy on a stable economic path.

On account of a variable time lag between changes in the money supply and changes in various indicators there are going to be various responses by the Fed.

For instance, whilst previous loose monetary policy could start producing upward pressure on prices in general, a more recent tightening in the monetary stance could start to depress the pace of economic activity.

Given that the central bank regards itself as inflation fighter it is likely to tighten its stance thereby exacerbating the economic slump.

As a result lending by banks is likely to slow down and this, on account of a decline in the rate of growth of credit out of "thin air", is going to put downward pressure on the growth momentum of money supply.

After a time lapse this is going to put downward pressure on various economic indicators and in turn will cause the Fed to ease its stance.

In short, a tighter or a looser monetary stance by the central bank affects the growth momentum of the money supply, which after a time lag affects economic activity.

In this sense the Fed it would appear is chasing it's "own tail".

Now, from 1960 to the present day, the growth momentum of our monetary measure, AMS, has been displaying visible fluctuations, which were followed by the fluctuations in economic activity. 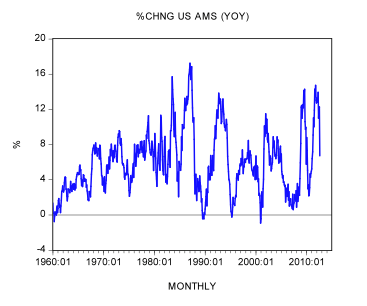 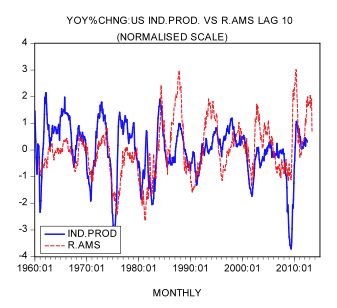 Most economists view these types of fluctuations in economic activity as cyclical in nature and are not related to Fed's policies as such. (On this way of thinking the source of the so-called cycles are various external and internal shocks).

Whilst the Fed is not the cause behind the cyclical fluctuations, it can move the economy away from a lower cyclical phase by means of a looser stance, so it is held.

This is also the view of the Fed Chairman Ben Bernanke who holds that the current elevated unemployment rate of 8.1% can be lowered by strengthening the pace of economic activity through an aggressively loose monetary stance.

The opponents of this view hold that currently this way of thinking is not valid. They believe that on account of structural issues the rate of unemployment is stacked at a very high level and cannot be lowered by means of monetary pumping. If anything, monetary policy is likely to generate a higher rate of inflation.  The opponents are of the view that the so called structural problems can be fixed by means of fiscal rather than monetary policies.

We suggest that the history of the last 60 years tends to support the view of Bernanke, i.e. that loose monetary policy can move the economy away from an economic slump.

Having said that, one needs to acknowledge periods such as the Great Depression, when during the 1930s monetary pumping was ineffective in moving economic activity away from an economic "black hole".

As a result, the yearly rate of growth of industrial production plunged to minus 31% by July 1932. It stood in negative territory until April 1933 when it reached a zero percent rate of growth. 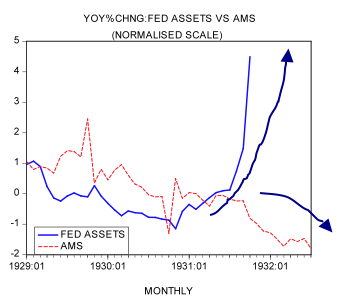 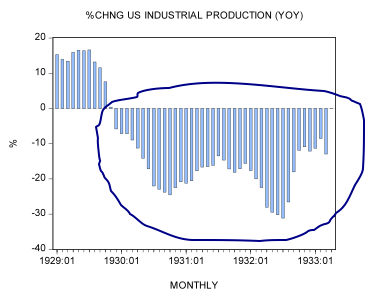 We suggest that on account of a severe depletion of the pool of savings — that is, the pool of sustenance — it took some time before the rate of growth of industrial production moved into positive territory. (Note that a fall in the money supply stopped the diversion of resources away from wealth generators towards non-productive activities, allowing the strengthening in the pool of sustenance and in turn in economic activity).

We suspect that at present the pool of sustenance is also likely to be in trouble. It remains to be seen whether the pool is still growing or stagnant. If it is stagnant then Bernanke's opponents are likely to be right – monetary policy is going to be ineffective in reviving the economy. (Note that as far as we are concerned loose monetary policy can never revive an economy, it can only create an illusion that it can do so when the pool of sustenance is still expanding).

If anything, the more the government tries to "help" the more damage it inflicts upon the pool of the means of sustenance and the worst things become. It is for this reason that the great Austrian economists Ludwig von Mises and Murray Rothbard argued that the best way to revive the economy is for the Fed and the government to do nothing as soon as possible.

Nothing here means that the Fed must stop pumping money while at the same time government outlays must be cut to the bone. All this will release resources to the wealth generators who will set in motion a genuine economic recovery.

In his various speeches the Fed Chairman Ben Bernanke has given the impression that the US central bank has the tools to stabilize the economy. We suggest that this is not possible given the Fed's responses to the movement of various economic indicators such as unemployment, real GDP and the CPI, responses which have subsequently set in motion various shocks. All this is manifested through the fluctuations in the rate of growth of the money supply, which after a time lag sets in motion fluctuations in economic indicators. Whilst the Fed cannot stabilize the economy it would appear that it can somehow counter cyclical swings. For instance, when the economy falls into a recession the Fed at least historically was able to revive the economic statistics by means of monetary policy.

Some commentators contest this way of thinking, arguing that currently various structural issues have made monetary policy ineffective. We hold that the issues are not structural as such, but have emerged on account of past and present reckless policies of the Government and the Fed which have severely weakened the economy's ability to generate wealth. We hold that the real economy could be fairly quickly revived by drastically reducing government outlays and by stopping the Fed's monetary pumping.

Thinking of Buying Gold? Make it safer, cheaper and easier with BullionVault...