END_OF_DOCUMENT_TOKEN_TO_BE_REPLACED

Yes, you can be too diversified in equities. In fact, most people are...
IF YOU'RE like most active investors, you probably own way too many stocks, says Chris Mayer in The Daily Reckoning.
How many is too many?
I'll start with Joel Greenblatt, the famous hedge fund manager, who wrote this:

"After purchasing six or eight stocks in different industries, the benefit of adding even more stocks to your portfolio in an effort to decrease risk is small."

Most people own lots of stocks, thinking they are lowering their risk. But this just isn't so. After as few as six names, you could be fully diversified. Risk, however, is only part of the eternal equation. What about the reward?
Well, there isn't a magic number for top results. But I've always made the case that it is better to focus on your best ideas. Maybe six-eight stocks are too few. More than 30 stocks are probably too many. I have to wonder about the value of anybody's 31st and 32nd best ideas. (This is why I regularly rank my portfolio and simply lop off the lower reaches in an effort to keep the portfolio small and focused on favorites.)
It makes intuitive sense. A smaller portfolio of your favorites should do better than a long list of 30 or 50 stocks you like. In addition, in my 20-odd years of studying outstanding investors, I've been struck by how most of them run concentrated portfolios.
Steve Leonard at Pacifica Capital Investments is one of those. His portfolio has only about dozen names currently. He frequently owns fewer than ten. And his track record is outstanding.
Steve started managing money professionally in 1998. Since then, he's delivered 11.8% annualized, versus just 5.2% for the S&P 500. Over the years, that means you'd be up almost 500% with Steve, versus 124% for the market. (See the chart below.) If you'd put $1 million with Steve in 1998, you'd have had almost $6 million by the end of 2013, versus less than $1.7 million with the S&P. 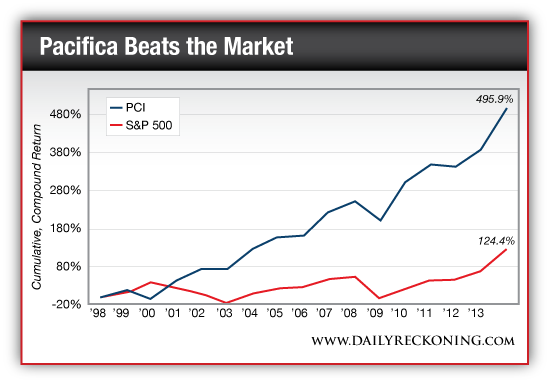 I love to talk to other investors. I just love to talk about ideas and experiences. Steve has a good story to tell, and I want to share it with you.
Steve started his career investing in commercial real estate in Los Angeles in the early 1980s. Prices were hit hard after a recession there. When market values recovered, Pacifica stopped buying. Later, it pared back its holdings as prices climbed further.
He repeated his act in Denver – a market that had crashed as part of the S&L crisis.

"There was nothing wrong with Denver and plenty right about it," he said. "The city was just extremely overbuilt, and the bargain prices reflected the complete lack of investor confidence."

At one point, Pacifica had the largest private commercial real estate portfolio in Colorado. It averaged more than 35% in annual returns. And consistent with Pacifica's philosophy, he sold it all in 1998 when market prices recovered.
You can see the pattern. Buy when things get cheap. Sell when they are no longer. It is a time-tested recipe, but hard to follow.
Steve then decided to focus on the stock market, where he had generated returns well above the major indexes with his family accounts. "Even in college, I invested a little in the stock market," Steve told me. "It always fascinated me."
Raising money for his stock market venture wasn't as easy as he thought it would be. Probably because people wondered if real estate success would translate into stock market success.
At first, the skeptics had the better of the argument. When Pacifica started investing in stocks in 1998, the market was strong. Steve's performance initially lagged the market as Pacifica held increasingly large cash balances as stock prices reached levels Steve knew were unsustainable.
While it meant he lagged at first, his strategy soon paid off, as that performance chart shows.
As Steve says, investing in the market and investing in real estate are not that much different. The principles are the same. You have to understand what you own. You have to know what it's worth, what will protect your value and how it will grow.

"There is one big difference," Steve said. "In real estate, we were the managers. We controlled our fate more than you do when investing in a public company. We made the decisions about deploying capital. We decided whether to put a new roof on a warehouse or retail building or return cash to our investors."

Of course, with a public company, you don't get to decide how to invest the capital of the business. Management does. And this is why they are so important. "When you invest in a public company, you have to like the management," Steve advises. "If you don't, you shouldn't own it."
There is another difference. Commercial real estate returns depend heavily on the economic cycle. "In real estate," Steve said, "it's very hard to have a brand and achieve returns significantly different than the performance of the broader market. But if you are American Express or Coca-Cola, your returns are not as affected by the cycles. And so you can be a long-term owner, which is our preference.
In essence, Steve's approach is simple – but hard to execute. Focus on a small number of businesses. Know the companies better than anyone. And buy them below intrinsic value. Sell when prices are full.
So what does Steve think about the market now?

"It's been a broadly strong market," he says. "We think it's very hard to find value now."

Though he is not a market timer, he's been paying attention to various warning signs. For example, individual investors are trading more. In March, TD Ameritrade reported an all-time high in number of trades. E-Trade reported a 32% increase.

"History shows over and over again that individual investors usually become most active near market peaks," Steve says. Not only are they trading more, but also, they are borrowing more on margin to buy stocks.

Steve ends his first-quarter letter with some good, hard-earned wisdom:

"The bottom line is that to be a good investor, you need to not only buy when it is emotionally the hardest, and sell when emotionally it is the hardest, but also do nothing while waiting for market extremes to offer better opportunities. Sounds so easy, but it is so hard. You often don't know you have been right until months or even years later...As we continue to preach tirelessly, successful investing is not about beating the market every time, it's about beating the market over time."

Good advice and a wise approach – though tough for most to stick to. Steve has proven he can navigate tough markets. (His clients were down just 13.7% in 2008, when the market fell 37%.) And his clients have certainly beaten the market over time.
Lastly, remember to keep that portfolio of yours trim. More stocks does not mean lower risk. And some of the best investors – like Steve – often own fewer than a dozen names.
After a decade in corporate banking, Chris Mayer used his deep analytic approach towards stockpicking to beat the market 3-to-1 between 2004 and 2014 at newsletter publishers Agora Financial. Now moved to Bill Bonner's Bonner & Partners, his Chris Mayer's Focus service seeks shares with the possibility of returning 100-to-1.
See the full archive of Chris Mayer articles here.