END_OF_DOCUMENT_TOKEN_TO_BE_REPLACED

Only way the Bank is going to raise rates...
UK house prices are rising at their fastest rate since 2004. And there's just one thing that can burst the bubble, reckons John Stepek at MoneyWeek magazine.
And no. The end of the stamp duty holiday won't put an end to the house price madness.
Annual house price growth hit 13.4% last month, according to Nationwide figures.
That's a horrible statistic for any would-be first-time buyer to read, and if you're in that position, I sympathise.
I'd like to be able to tell you that relief is on the horizon.
Unfortunately, I don't think it is.
The latest surge in annual house price growth – to the highest level since November 2004, slap bang in the middle of the last house price bubble – is admittedly not quite as wild as it looks.
June last year was, as Nationwide's chief economist Robert Gardner puts it, "unusually weak". House prices actually dipped that month, because we were all in ultra-lockdown as opposed to the rolling pseudo-lockdown we're stuck in to various extents right now.
There were no vaccines then. Lots of people thought there wouldn't be vaccines for at least five years. And back then, some of us even imagined that house prices might drop because of the pandemic.
Needless to say, that's not what happened. Prices have risen every month in the past five, according to Nationwide.
So while the 13.4% rise in prices has been a little exaggerated due to the "base" effect of being by comparison to a very weak month last year, that's really very little consolation for anyone who doesn't think that it's healthy economically or socially for the cost of a basic human need to be rising at such a rapid rate.
Is anything going to change this any time soon? The most obvious crumb of comfort on the horizon is the end of the stamp duty holiday (though it's already ended in Scotland), which many blame for pouring fuel on the fire. 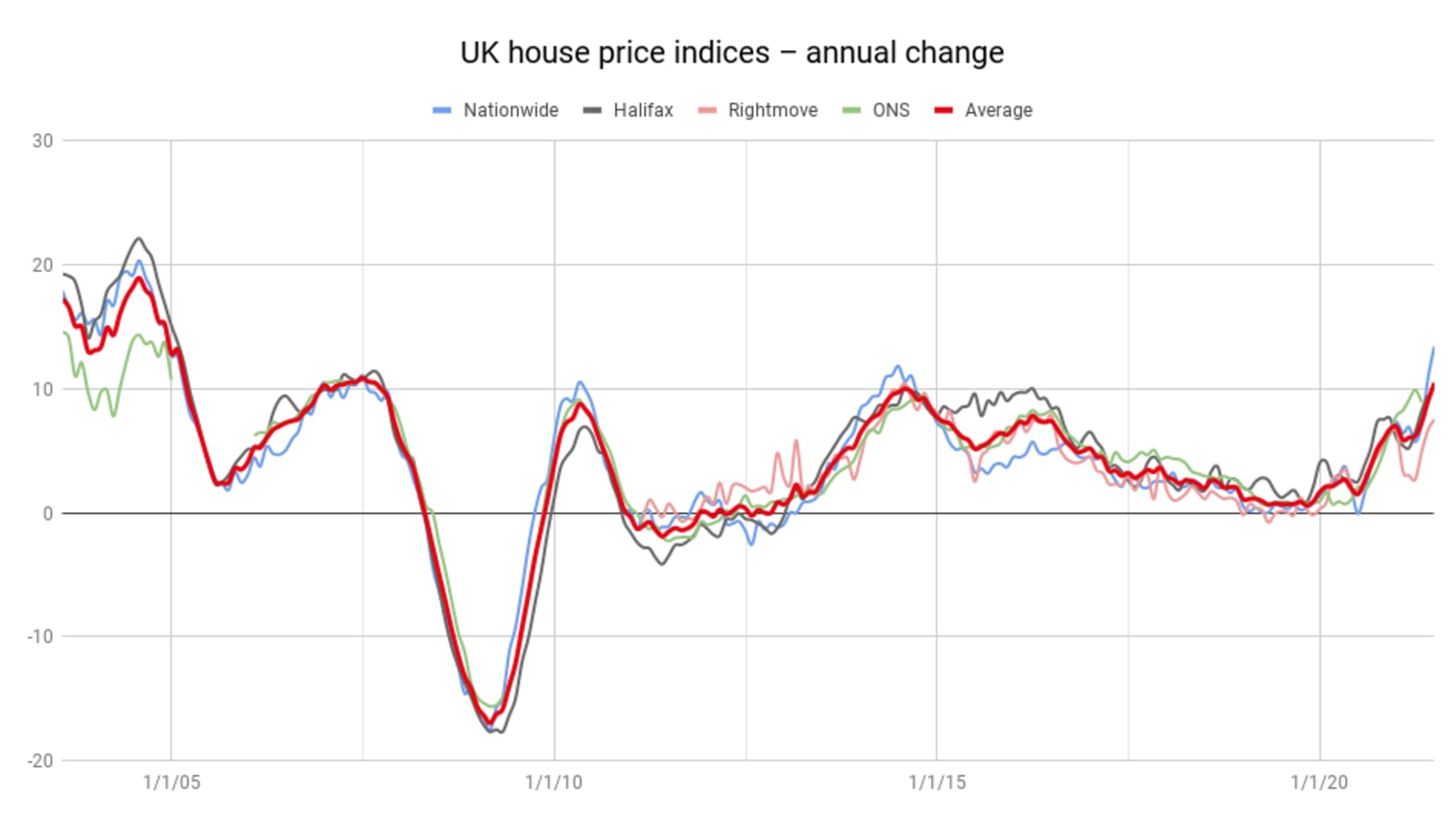 It's almost certainly true that the stamp duty holiday has pulled forward transactions that would otherwise have happened later in the year. That in turn means an artificial surge in demand without a corresponding artificial surge in supply.
Also sellers aren't daft. They know a stamp duty holiday means they can bump their own sale price up at least a little. If the buyer doesn't have to pay a big cash lump sum in stamp duty, it means they can afford to borrow more to buy the actual house. Hence at least some if not all of the stamp duty savings accrue to the sellers and their agents, not to the buyer.
So there's no doubt that a stamp duty holiday is going to boost house prices, all else being equal.
Unfortunately, the end of the stamp duty holiday is not going to put an end to all this. As Andrew Wishart of Capital Economics points out: "The tax break is just one of a laundry list of factors behind the surge in house prices over the past year."
What do those include? We've been through it before but the list includes low interest rates; rising mortgage availability; a pent-up desire to move after the lockdown; and an added desire to move as people adjust to new working patterns.
Now the last two things are possibly temporary factors. But I can see it taking a while to settle down. And in any case, they're not really the fundamental driving force behind the rising prices.
Yes, you've arguably got an outflow of money from expensive (ie commuter belt) areas to less expensive (ie previously non-commuter belt) ones which probably means you have a wave of slightly less price sensitive buyers than before.
But the real issue – as always with houses – is the supply of credit to the market. And that shows no sign of seizing up.
Wishart argues that house prices will likely "moderate" rather than crash, and on an annualised basis that's probably reasonable, given that for the rest of the year, the comparators will be tougher. (In other words, the year-on-year figure won't be compared with weak months).
Also it's worth noting that affordability – as measured by the Nationwide – is now very close to where it was at the peak of the last bubble in 2007. Does that mean the bubble will pop?
As far as I can see, there's only one way it happens. I don't think we're going to get a repeat of 2008 anytime soon.
So until inflation takes off and the Bank of England and credit markets respond by tightening the cost of borrowing (Andy Haldane had a bit to say about this in the latest MoneyWeek podcast), it's hard to see house prices coming down.
However, it does mean that until then, we're going to be stuck with this social and economic problem which is a lack of affordable housing.
How will that resolve itself? I'd expect to see more pressure to build more homes. That might help at the margins in some areas, but it doesn't address the credit issue.
It might also increase the pressure on wages to go up, which is inflationary in itself.
The government might even throw more fuel on the fire at some point by coming up with more first-time buyer schemes that are just taxpayer-backed subsidies for house builders or home sellers.
In the meantime, if you're looking to buy a house, I can only repeat that worrying about the big picture outlook is usually a waste of time.
If you want to buy a house to live in, it's your personal circumstances that really matter.