END_OF_DOCUMENT_TOKEN_TO_BE_REPLACED

Forget gold – this is the real "fear trade" right now...

They're worried about recessions and market crashes. They're selling stocks – and buying gold.

But there's an even bigger fear permeating the country right now. It affects everyone from wealthy investors to the single mom making minimum wage at Burger King.

I'm talking about gun violence. A story about gun violence pops up almost every day. Sometimes it's a senseless, everyday shooting. Then there are the drug trade killings that rattle the streets of cities like Baltimore every single night.

But it's the random mass shootings that make the national news. These rampages spark nasty political debates that devolve into shouting matches. But they also scare the bejesus out of anyone who thinks they or their families could be the next victims of gun violence...

Frankly, I don't want any part of this debate. All I know is the debate over our nation's gun culture is sparking a fear trade that's been playing out in the stock market for months. And whether you agree with it or not, this massive market trend that looks unstoppable.

It's not difficult to understand. People are terrified about the violent crime they see on television. They want to protect their families. And yes, they want to buy guns to do it. Every incident of gun violence not only stokes these fears – it also brings fears that the government is just moments away from hammering out new restrictions on firearms and ammunition.

And these fears have resulted in big sales for the gun manufacturers.

Black Friday FBI background checks for firearm purchases hit another record last year – right on the heels of a shootout at a Planned Parenthood office in Colorado. And it's no coincidence that the previous all-time high for background checks came on December 21, 2012. That was just days after the Sandy Hook shootings...

That's the fear factor at work.

Smith & Wesson Holding Corp. (NASDAQ:SWHC) and Sturm Ruger & Co. (NYSE:RGR) are your big dogs in this sector. These two gun stocks have been trouncing the major averages for years...

Just how powerful are these trends? See for yourself: 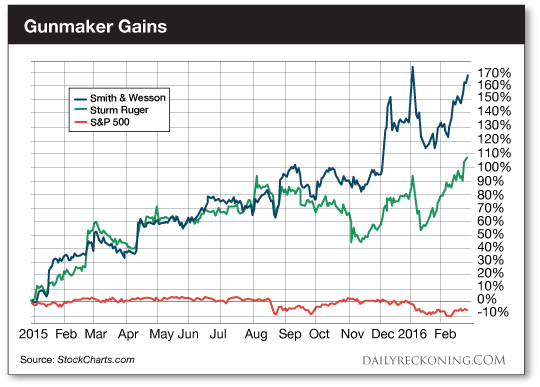 Both SWHC and RGR are up triple-digits since the beginning of 2015. Even the recent market slump hasn't slowed these giants down. Both stocks are up more than 15% this year, while the S&P 500 is down a cool 5.5%.

In this market, you should pay close attention to the stocks and sectors that are strongly outperforming the major averages. With the constant threat of more gun control legislation creeping into every level of politics these days, there's also the potential for additional catalysts that will help propel these stocks to massive gains.

For the record, it's not my job to weigh in on the ethics of guns. That's your call. I'm just bringing you the facts. What you do with them is up to you. Here is an incredibly powerful trend that doesn't seem to be going away anytime soon to me.