END_OF_DOCUMENT_TOKEN_TO_BE_REPLACED

What Keats could have taught Greece and Goldman Sachs about Buying Gold...

"BEAUTY IS TRUTH; truth beauty," the poet, John Keats famously mused in his Ode on a Grecian Urn, says Eric Fry in the Daily Reckoning.

Neither Greece nor Goldman Sachs can seem to get the hang of this concept.

Grecian finances, for example, illustrate an opposing principal: deception is ugly. For more than a decade, the Greeks have engaged in a mass deception – that a revenue-starved nation could finance generous social programs. The idea was never viable, feasible or legitimate. But the Greeks wanted to believe it...and so did the rest of the European Union. They all wanted to believe that Greece's last six defaults were a fluke – that the new and improved Greece would behave nothing like the old, profligate one.

The Greeks didn't do that. Instead, they joined the Euro bloc and pretended to "act German". For eleven years this charade succeeded. But the Greeks are not German. (They aren't even French.) Like many American marriages, Greek finances inhabit a chronic state of crisis, interrupted by brief interludes of calm.

But the Greeks are not unique. The nations of the West are full of deadbeats. The Spaniards and Portuguese play make-believe as well as the Greeks. And so do the Italians. But make-believe is not just a Mediterranean game; it is an international game. And no one plays it better than Uncle Sam.

He also pretends to possess the means to "make good" on his debts. And so far, his creditors believe him. Your editors don't. We think the guy is "all hat and no cattle". We don't think Uncle Sam can actually afford to pay the debts he's got already, much less the trillions he's adding to his debt load year by year.

Based on raw numbers, Uncle Sam belongs in a debtor's prison. But that doesn't stop him from borrowing even more money or dispensing more freebies to a populace addicted to "something-for-nothing" or enabling certain privileged financial institutions to leech from the taxpayers' jugular.

This "system" won't work. It is not a system at all. It is half fairy tale, half scam. America's budget deficit, at 13% of GDP, is nearly identical to Greece's. And America's accumulated debts – at 86% of GDP – do not trail very far behind Greece's at 112% of GDP. But that comparison is hardly comforting. In absolute terms, no debtor can compare to America.

As fellow Reckoner, Joel Bowman observed recently, "In a misguided effort to rescue the economy from the untold horrors of the 'abyss,' the prophets of modern central planning seek to transfer society's means of production from the most to the least productive class; from private fist to public mouth; from worker to moocher; host to parasite."

In doing so, these charlatans shackle the current generation's liabilities to the income statements of futures generations. The nearby chart (which first appeared in the May 10, 2010 edition of The Daily Reckoning) shows the total "bare bones" funding requirement for various countries during the next three years. 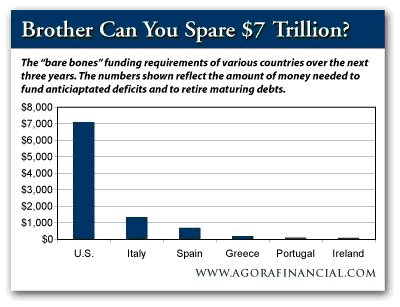 Specifically, this chart shows the amount of borrowing that would be required by each country to fund anticipated deficits during the next three years and to re-finance all government debt coming due in the next three years...America's three-year funding requirement is not nothing.

And America is certainly not immune to the kind of investor scrutiny that could produce a debt crisis...or a currency crisis.

In a pinch, Greece could probably borrow $30 billion here or there to plug its revenue shortfall. But in a pinch of similar relative size, the US might not be able to borrow $7 trillion...especially not when the US is unable to scrounge up cash from its own citizens.

"For the 19th consecutive month, the national budget fell disastrously short of anything close to balanced," Joel recently observed. "According to the Treasury Department's own figures April's $82.7 billion deficit was almost four times the shortfall registered in the same month last year. The official tally only tells part of the story. Sadly, it was the best part."

As Addison Wiggin observed last week in The Reckoning, "That figure of $82.7 billion is merely the 'BS' figure the Treasury puts out there when it reports the deficit. The real tell is how much the national debt grew. And in April, that figure was twice the size of the 'official' monthly deficit – $175.6 billion.

Historically, April tends to produce a modest surplus (or at least a mitigated deficit), thanks largely to the influx of tax receipts due around the 15th of that month. But despite the administration's assurances that the employment landscape is steadily improving, receipts were down more than $20 billion from the same month last year (2010: $245.27 billion; 2009 $266.21).

Despite the severity of America's indebtedness, most people in positions of power refer to this disaster as if it were merely a broken water pipe. "We really should fix it," they say, as if we could turn a valve here or replace a gasket there and get everything running smoothly again. But no quick fix is possible. In fact based on the numbers, no long fix is possible either.