END_OF_DOCUMENT_TOKEN_TO_BE_REPLACED

Time to default. Ask Russia for tips...
FOR SOME reason, people think a sovereign default, and a subsequent debt restructuring such as Greece's government faces, is something that is conceivable – the proverbial asteroid hitting the earth – but which has never actually happened, writes Nathan Lewis of New World Economics in this column first published at Forbes.
Sometimes, raw data says more than words. According to a dataset from the National Bureau of Economic Research, there have been at least 153 sovereign debt restructurings since 1980.
Ideally, Greece's government will be able to reduce the overall debt load, now around 192%, to something manageable, perhaps around 50% of GDP. This process is rife with danger, alas.
I suggest consulting with Russia. It had a default and debt restructuring in 1998-2000 that reduced the net present value of the outstanding debt by about 50%. The need is to avoid some of the potentially bad outcomes, such as widespread asset stripping by foreign entities (which is already going on), or the loss of domestic sovereignity and the installation of some unelected EU-controlled autocrat, as arguably happened in Italy under Mario Monti.
That also happened in Greece, under unelected technocrat prime minister Lucas Papademos, who was previously the governor of the Bank of Greece, and then afterwards became the vice president of the European Central Bank. Papademos argued against a Eurozone deal to write off half of Greece's debts. He wanted a far smaller "haircut", because a 50% write-off would hurt banks.
Since Papademos' stay of execution for the bankers, there have been a long series of "bailouts" by various official entities beginning May 2010, funded by directly or indirectly by taxpayers outside of Greece, notably Germany and France. None of this has helped Greece's situation in any way. The Greek government's debt/GDP was 130% at the end of 2010. A 50% write-off would have reduced this to about 65%. The Eurozone's official government debt-to-GDP ratio limit is 60%.
But didn't the bailouts help Greek government provide important services to its citizens? Or, at minimum, to pay some vastly overgenerous pensions to some real Greek people? Actually, the Greek government ran a primary surplus of an estimated 1.5% of GDP in 2013 and 0.3% in 2014. The "bailouts" were mostly to pay interest and principal on maturing debt.
None of this helped either the people of Greece, nor the Greek government. So who was getting "bailed out"? It was mostly foreign banks.
Over time, as the Greek debt matured (instead of a default and 50% writedown), holders of the debt were paid in full, and the Greek government's debt was gradually transferred to the "troika" lenders, and indirectly the bag-holding taxpayers of Europe. Not surprisingly, some members of the Greek parliament are now arguing that at least some of the Greek government's debt constitutes "odious debt," a legal term which justified the government of Ecuador's debt default in 2009. ( Watch the Greek-produced documentary Debtocracy – which advocates discharging the debt as "odious debt" – for details.) 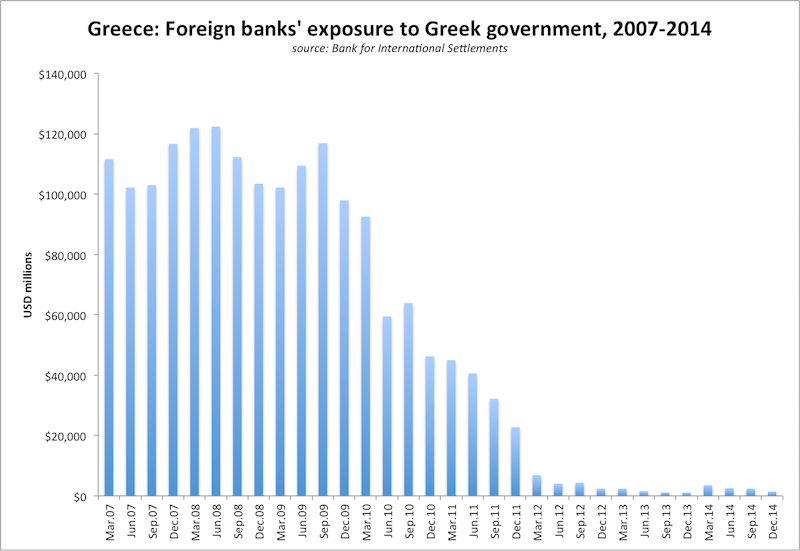 In addition, the Greek government in 2012 conducted a recapitalization of Greek banks, totaling €48.2 billion, or 24.8% of GDP. The Greek government did get some equity in trade for its €48 billion (which it obtained in the form of troika "bailout" loan), although this equity is likely to go to zero if the Greek government defaults on its bonds, likely resulting in terminal insolvency among Greek banks, if existing insolvency and deposit flight doesn't kill them first.
Who was bailed out? Where did the €48 billion go? To the banks' creditors, including foreign banks. (The recent increase in foreign bank exposure to Greek banks might be "bailout"-related.) 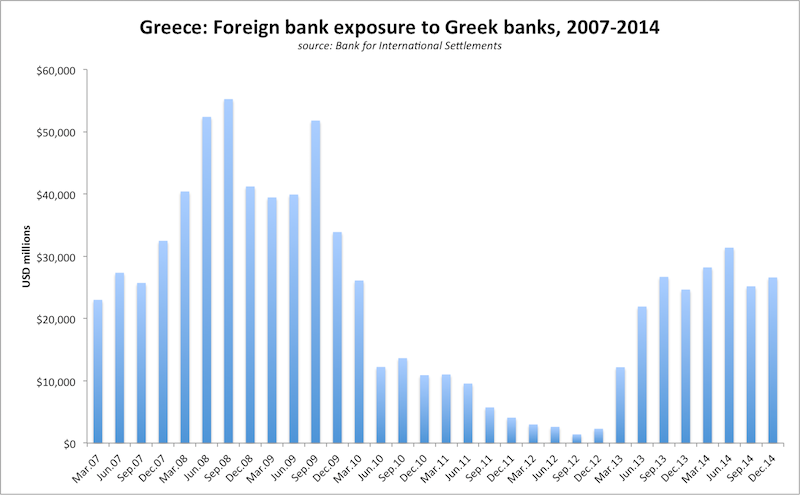 Odious? I have to hold my nose just to write this stuff down. None of it is new either; you would find most of the same elements in the Latin American sovereign debt crises of the 1980s.
The end result of all this is that the Greek government's debt today, totaling €313 billion, consists of €64 billion of domestically-issued bonds, €15 billion of short-term notes, €2.7 billion of foreign-issued bonds and securitizations, €212 billion of "bailout" loans, and €5.0 billion of other external loans. In short, the total foreign exposure by private entities (banks) to the Greek government is, today, about €7.6 billion.
Thus, if this swelling pile of debt is eventually written down by 70%, the €220 billion loss will get eaten by the innocent taxpayers of Europe, rather than the privately-owned banks. Actually, the money has already been lost, as the only way to avoid a default at this point is for the taxpayers of Europe to continue to loan Greece's government more money.
There's some talk that a default by the Greek government would require "leaving the Eurozone", whatever that means, and perhaps not using the Euro. This is mostly just globalist propaganda, along with the notion that a Greek default would also require future "federalization" of Europe. Just look at that NBER list of 153 debt restructurings, none of which required, or was followed by any "federalization." There is no reason that Greece can't continue to use Euros as the basis of commerce, just as Dollarized Ecuador continued to use Dollars as the basis of commerce after the government's 2009 default.
Ideally, a default by the Greek government should be the first step of a wonderful era of recovery and prosperity, just as was the case in Russia after its default in 1998. By following the Magic Formula (Low Taxes, Stable Money) after the default, along with other reforms, Greeks can become wealthier than Germans in less than twenty years.