END_OF_DOCUMENT_TOKEN_TO_BE_REPLACED

The theory that stocks are benefiting from asset rotation holds little water...

As always, only time will tell, writes Tim Price at his Price of Everything blog.

But on the basis that it makes sense in general terms to buy low and sell high, how should we view the current behaviour of the S&P 500, for example ? Financial analyst and commentator Doug Wakefield has published a chart summarising the last 13 years of the benchmark US stock index with some helpful notation: 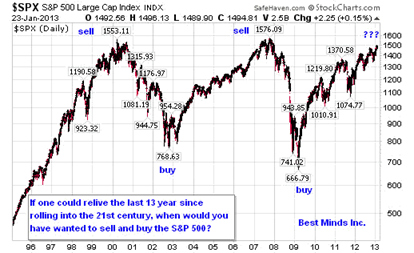 For good measure, he has also published a price history of the rather ungainly-sounding SPDR Barclays High Yield Bond ETF: 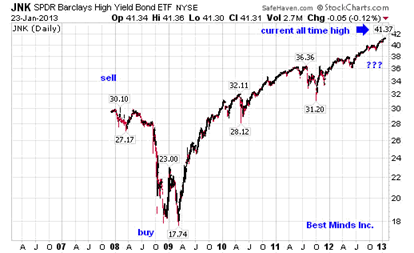 Straightforward analysis of these two charts happens to fire a torpedo into the current thesis that we should all be preparing for some kind of 'Great Rotation' out of bonds and into stocks. What are we all supposed to do if stocks and (in this case, high yield) bonds are both expensive? Answers on a postcard. Please address to: Mr Ben Bernanke, The Marriner S. Eccles Federal Reserve Board Building, 20th Street and Constitution Avenue, Washington D.C.

One reason why the 'Great Rotation' thesis is nonsense is that there is virtually no professional investor out there who can swing effortlessly between these two asset classes. Outside the world of global macro hedge funds, there are bond fund managers and equity fund managers, and they don't tend to drink in the same bars. And because these managers tend to live in narrowly constrained silos, adhering to benchmarks that may or may not be complete nonsense (bond fund managers are obligated to have their highest portfolio exposure to the world's most heavily indebted countries, for example), their enforcedly narrow worldview is partly to blame for the financial system's excesses. Happily for us, we have no such constraints, but we are very worried about the fact that they exist and exert such a cruel, damaging illogic upon just about everybody else.

We are all supposed to be getting very excited about the fact that the Dow Jones Industrial Average, a very simplistic share price-weighted measure of 30 large American companies, has just burst through the 14,000 level. But as fund manager Kyle Bass points out, we should be spending a little more time thinking about real returns and a little less on changes in nominal prices. As he observes, "Zimbabwe's stock market was the best performer this decade – but your entire portfolio now buys you 3 eggs".

Is it possible that the big banks, after never having more than $60 billion in excess reserves between 1957 (oldest date I could find on a Federal Reserve website) and the end of 2008, are sitting on more than $1.5 trillion at the end of 2012 because they are preparing for a massive DEFLATION of asset prices in the future? What about big corporations, who recently reached their largest amount of cash on record?

Food for thought, but it doesn't taste particularly nice.

In a monumental piece of market analysis, Doug also highlights the malign role played by market theorists through the ages. One of the most infamous was Myron Scholes, who helped to develop the Black-Scholes options pricing model. There are six assumptions to Black-Scholes, one of them being that markets are efficient. Another way of saying this is to state that market returns follow the traditional 'bell curve' of standard deviation, as shown below: 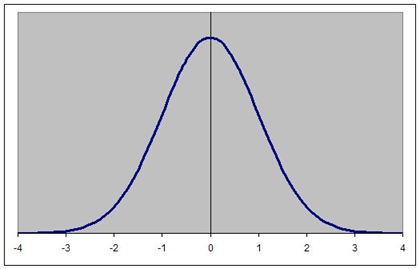 Myron Scholes' place in history is assured, and not just for the creation of Black-Scholes. For anyone working in the financial markets or investing in them during 1998, he is also infamous for his involvement in one of the most disastrous financial collapses of the twentieth century. Scholes was a partner in the hedge fund Long Term Capital Management. Over to Roger Lowenstein, who put together a handy post-mortem in the form of his book, 'When Genius Failed':

At one point during the road show, a group including Scholes, Hawkins, and some Merrill people took a gruelling trip to Indianapolis to visit Conseco, a big insurance company. They arrived exhausted. Scholes started to talk about how LTCM could make bundles even in relatively efficient markets. Suddenly, Andrew Chow, a cheeky thirty-year-old derivatives trader, blurted out, 'There aren't that many opportunities; there is no way you can make that kind of money in Treasury markets.' Chow, whose academic credentials consisted of merely a Master's in finance, seemed not at all awed by the famed Black-Scholes inventor. Furious, Scholes angled forward in his leather-backed chair and said, 'You're the reason – because of fools like you we can.'

The failure of LTCM could also be called 'When Leverage Failed', given that by the time it required an emergency bailout orchestrated by the Federal Reserve, the fund had an effective leverage ratio of more than 250-to-1. Which makes it sound a bit like just about any bank in 2008.

The noted Nobel Prize winning economist Hyman Minsky has a lesson all market participants should understand with the current obsession of "more loans and more leverage available now for speculation" by Wall Street banks; the LONGER a period of stability, the HIGHER the potential risk for greater instability when the crowd changes their behaviour.

The title of this article, When Everyone Sees, came from a collection of essays on character and its critical importance in a society titled, When No One Sees: The Importance of Character in an Age of Image, by Os Guinness. The surreal aspect of living through the last year and a half, is that everyone can see that the "solution" for a declining market (a market yet to have a 10% drop in the Dow since October 2011) appears to be to announce that you are facing a currency crisis, need more "liquidity" until more debt turns into more jobs, or that you have entered a recession again. As long as the next image ("the conscious and intelligent and manipulation of the organized habits and opinions of the masses") that is presented to the public is higher stock prices ("orgies of unrestrained speculation") as a RECOVERY, why will anyone be surprised when these words by a founding member of the Federal Reserve in 1929, Paul Warburg, come true… again( "the ultimate collapse" and "a general depression involving the entire country(ies)").

It would appear that the age of image is coming to an end and the age of character through pain is rising. The rally periods are getting shorter, and the problems from supporting MORE speculation by central bankers continue to mount. Soon, the can will refuse to be kicked any further down the road.

We are finding it increasingly difficult to write honestly about the financial markets without inadvertently spooking existing or prospective clients. The media in general prefer optimism (we think: "denial") to an objective assessment of just how profoundly dangerous the underlying financial currents are. But it isn't all bad news. We are able to sleep at night because we have consciously pursued an investment approach that doesn't allow us to go "all in" on any one asset class.

We hold high quality credit investments with a positive real yield because those investments are issued by entities of unimpeachable credit quality. We hold high quality equity investments in areas offering a high likelihood of genuine growth as opposed to mediocre overpriced stocks being kept afloat on a rising tide of liquidity. We then complement these more traditional assets with less conventional ones: uncorrelated funds that derive their returns from the persistence of trends in market prices (i.e. the ongoing existence of greed and fear in investors' psyches); and tangible, non-financial assets that offer the potential of protecting against inflation and ongoing currency devaluation, such as gold and silver.

We note that Credit Suisse has now run up the white flag on gold, declaring that the precious metal "appears significantly overvalued". By comparison to what, exactly? Or as expressed in what, exactly? We think Credit Suisse's gold analysts understand as much about gold as Kermit the Frog or any other of the Muppets.

The chart below, for example, shows the extent to which central banks have recently inflated their balance sheets: 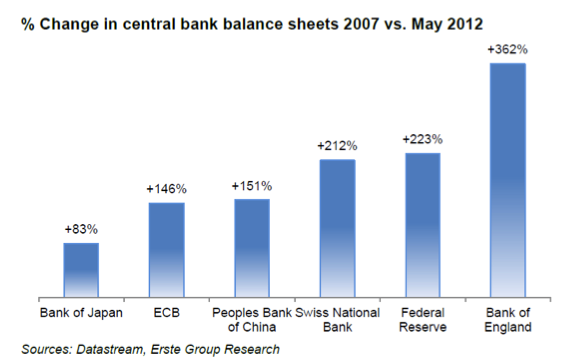 And the chart which follows shows (pre- the most recent announcement of QE) the extent to which gold in nominal Dollar terms has simply patiently tracked the expansion of base money by the ECB and Federal Reserve: 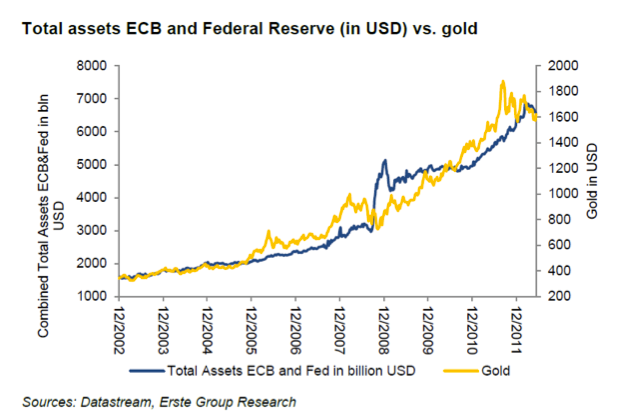 Mind you, one of our two organisations needed to raise over $8 billion in an emergency bailout, and one of us didn't. So what do we know.

And like any other investor, we have no idea how long this three-ring circus lasts. So while we can state with a high degree of certainty that this mess really will end badly, we can't state with any certainty over what time period it does so. So we are quite content to shelter in a variety of sensibly selected and genuinely disparate asset classes, and meanwhile pick fights with any and all comers who seem to have grave difficulty in distinguishing between nominal price returns and substantive, lasting value. Pay your "money", and take your choice.

Looking to build up your gold position? See how BullionVault makes it safer, cheaper and easier for you...