END_OF_DOCUMENT_TOKEN_TO_BE_REPLACED

Or not, of course. Porridge must burn or cool...

IF YOU'RE not following bonds closely, you're not really following stock and asset markets, writes Gary Tanashian in his Notes from the Rabbit Hole.

At the junction of the inflated risk 'on' trade (stocks, global growth assets, etc.) and risk 'off' (gold, Treasury bonds, cash & equivalents, etc.) are the pivotal indicators to these conditions – Treasury bond yields, yield dynamics and bond market signals.

My assumptions are that inflation instigated speculation is in play, but it has been seen as 'good' inflation or not inflation at all because it's been rooted in stocks on this cycle...and how can that be bad? That is sarcasm.

The other assumption is that the bond market, routinely manipulated at will by powerful policy makers over the last 9 years, has served two purposes: to mask the inflation (the Fed's Operation Twist literally had that as its primary goal and function) and to help fund asset speculation.

I just shake my head when I hear economists talking about 'GDP this, full capacity that and recession the other thing' in conventional, buttoned down terms because the economic recovery is the asset bubble and after this one is resolved they'll be doing what they always do, which is feed us all the reasons why it went down an unexpected path well after the fact.

That is because it is not a conventional economist's job to question why, only to extrapolate conventional Economics 101 through Masters-degree level economic theory...until something breaks.

Look no further than economic guru Abbie Joseph Cohen, she of 2000 bubble-era fame. Apparently she's still taken seriously as there she was being interviewed on NPR last week. In a discussion about new Fed chairman Jay Powell (a non-economist she made sure to point out and fret about) Abbs talked about how Masters level economist Ben Bernanke was masterful in his deft handling of the 2008 "financial crisis". People with vested interests in keeping you in conventional thinking mode never seem to mention that it was Federal Reserve policy excess that instigated the "financial crisis" in the first place. Take a view from Wonderland and you may see the folly of it all.

Back on message, the assumptions are that money printing in its various forms was used to promote asset speculation as an economic remedy and that bonds have been manipulated in order not to show true inflationary signals. If you ask me, these assumptions are self-evident, but for the sake of balance we'll play it straight. We'll also note again that stock market trends are bullish (Captain Obvious). That is what most people actually care about, I grant you. But I have a need to always be trying to flesh out the why along with the what. The why is the result of massive monetary stimulation and the what is bullish. Period.

But where are we going? That's up to indicators, many of which are bemoaned to have been dysfunctional on this bull cycle. Yet the abused and bastardized bond market may yet provide us with the necessary signals. Right now it's a bull party and is likely to remain a bull party as long as current bond indicator trends are in place; and so let's update through the lens of bond yields and dynamics.

Using the 10-year yield we note that a bullish pattern is still in play, although bonds rallied hard this week and yields dropped. Should the pattern be reactivated after the false breakout, the target is 2.9%. 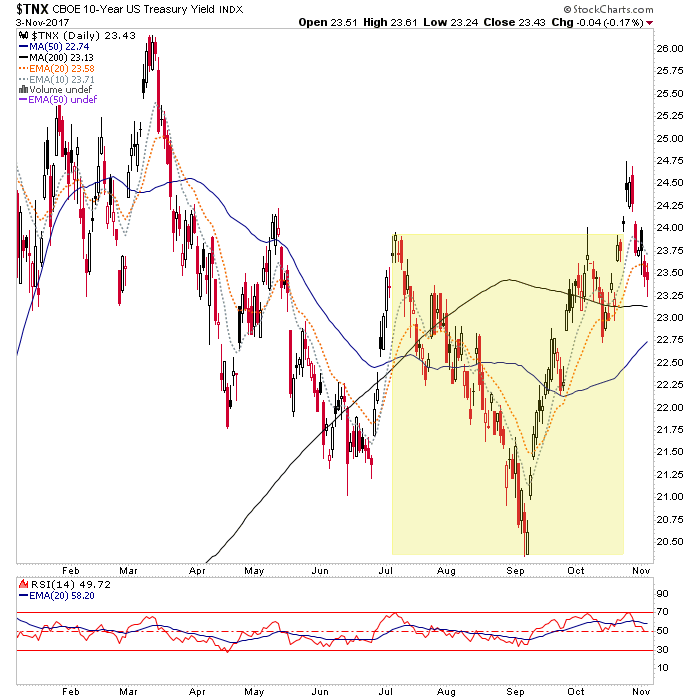 The implications? Well, for the bond market the implication is that the 2.9% daily pattern measurement fits nicely with some big picture macro points that would serve as either the death of yet another inflationary phase (the inflation is out there folks, not in the numbers the government cooks up but rather, it's rooted in stocks and leveraged risk assets) or the gateway to a full frontal von Mises style inflationary "Crack Up Boom", which would probably be perceived as bullish in its initial stages.

Maybe the simplest way of timing events is to not try to time them at all, but instead patiently let the indicators play out. We should know shortly if chart #1 above is going to resume its bullish yield destiny (bearish for bonds) and go hand in hand with rising risk 'on' assets and increasing inflationary noise. This would be an extension of the yield rise in 2016 that gained fuel due to the perceived fiscal reflation to come, after Trump was elected. The yield is still in a bullish looking 'handle' to that initial big up surge. 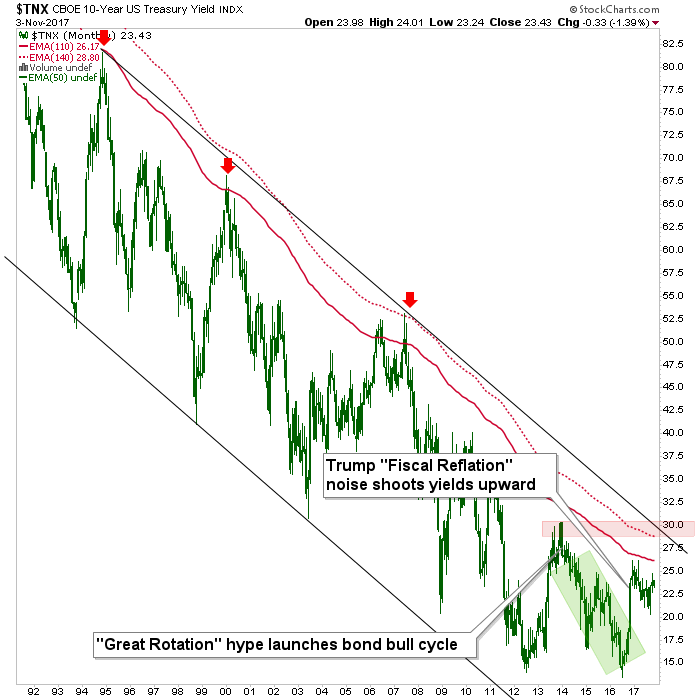 Yields can rise quite a way with bullish stock prices, and referring to the second chart, no real inflationary hysteria is indicated until the resistance traffic in the 2.9% to 3% area is exceeded; although the media may once again get hysterical about inflation below the limit area as it did when Bill Gross famously went short bonds (long yields) in 2011's 'inflation expectations' blow off and the "Great Rotation" promo that was spun in 2013. In each case, deflationary winds then blew in to varying degrees, capping yields and signaling new downturns.

Here is another monthly chart, showing various yields and the yield curve. Things 1-3 are in bull flags and as yields rise with risk 'on', all is indicated to be okay. But again, the moving averages are either the limiters to the party or they are the gatekeepers to an inflation scenario that could run too hot. Goldilocks likes her porridge "just right", after all. If the party is limited at the moving averages (30yr @ 3.3%, 10yr @ 2.9%) it would be a logical time for a correction in stocks. That has been our preferred view and that is what I am sticking with as long as the daily yield charts do not break down.

Right now the favored view is that the bullish backdrop remains in play and is the dominant trend. But if/when certain indications register it will be time to favor a significant correction.

It is either that or an inflationary von Mises Crack Up Boom awaits. We are not going to have "just right" porridge forever.