END_OF_DOCUMENT_TOKEN_TO_BE_REPLACED

Buy it for the gold bug in your life this Christmas...

STOCK-MARKET BULLS never read history, as in anything from the day before yesterday, and least of all the pink pages' price/earnings table today.

So the library shelves marked "332" under the Dewey Decimal system are typically left free for bears and gold investors to roam. And glancing at how long the stock-bull of 1982-2000 ran, you can see why.

Gold lost three-quarters of its purchasing power during that time. Only the grand sweep of history then proved that the glass was neither half-empty or full, but shattered...as the much-fabled history-loving "gold bug" believed all along.

"Gold has two interesting properties: it is cherished and it is indestructible. It is never cast away and it never diminishes, except by outright loss..."

So wrote Professor Roy Jastram in The Golden Constant (John Wiley & Sons, 1977). Alongside Peter Bernstein's The Power of Gold and H.W.Brands' The Age of Gold – but swapping their ripping yarns for dry, scholarly tables of grain prices from the 18th century – it's one of the very few books to acknowledge what die-hard gold investors feel so sure to be true:

Gold is much more than mere metal. It's history itself.

"[Gold] can be melted down, but it never changes its chemistry or weight in the process. The ring worn today may contain particles mined in the time of the Pharaohs. In this sense it is also a constant."

It's not something you can say of many other investments. Atomic weight 79; melting point 1064°C at sea level; cooled density 19.25 grams per cubic centimetre...gold's got everything a collateralized debt obligation has not. Time cannot dull or change it. Debt default can't diminish its value (provided you own it, securely, outright of course). And as Jastram's detailed study of four centuries shows, gold's value, like its nature, also displays something of a constant – constant across the long term at least – as measured against wholesale prices.

Trouble is, as Marc Faber of the Gloom, Boom & Doom Report reminded us late in 2008 – just as gold was sinking alongside everything else – "Gold has kept its purchasing power over the course of history...[but] the problem is that the owners of the gold changed over time."

How long can you wait for your wealth-store to return to full value? Or as Faber put it, "When Timur sacked Aleppo and Damascus in 1400, it didn't help to have your savings in gold. You lost your life and your gold."

Tamberlaine's Mongol heirs soon enough lost that gold, too. But amid such cataclysms, Jastram saw instead what he called "The Attila Effect" – the plain fact that, as Jill Leyland explains in her additions to the new, re-issued and updated text of The Golden Constant, "Men and women have turned to gold in times of distress, whether political, economic or personal..."

"The Latifundia passed gold bars secretly to their heirs," wrote Jastram 32 years ago, "who thus survived barbarian invasions to become nobility under the Merovingian kings of the fourth century...Austrian refugees, escaping Hitler's storm troopers, often owed their survival in a new country to the gold and jewels they could carry on their persons...The French peasant was astute when he buried his coins on the threat of invasion and pillage..."

Through such crises as the French and Bolshevik Revolutions, as well as Hungary's post-war hyperinflation – worse even than Weimar Germany's one trillion per cent on some accounts – gold retained its ability to raise cash, if not act as payment itself, for those lucky few who'd chosen to hoard it ahead of the need.

Nor does history require "extreme episodes", as Leyland writes in the new 2009 edition, "to demonstrate the value of gold in a crisis..." 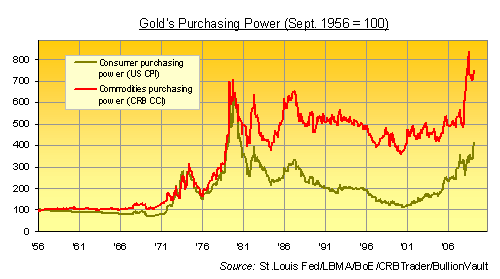 Jastram's study famously split the history of gold's purchasing power into inflation, deflation, and the rest. Since gold was usually money during the first 350 years of his scope, it also acted quite oddly to our 21st century view:

Gold's value rose during deflation, but fell during inflation. Whereas today, of course, everyone expects gold to rise when the cost of living increases, but fall when the threat of inflation recedes. Which may or may not be wrong, but the first post-Gold Standard inflation said otherwise, and it most likely won't matter given the volume of faith this very modern idea now stores.

And the future? Inflationary fears will be revived by the price of the new Golden Constant, costing $110 in the US, or a shocking £79.95 in the UK...equal to a Dollar exchange rate of just $1.37. Yet this is a scholarly tome, and even corduroy jackets aren't cheap. Second-hand stores, meantime, are still charging $181 or more for the 1978 hardback (worse yet again in the UK, priced at £157.98 with a quarter-century-busting $1.14 on cable. How's that for the grand sweep of history!).

If you or the gold bug in your life needs reassurance this winter that, in the long-run at least, gold's constant purchasing power is as rare and precious as its substance, you could do much worse than treat him for Christmas.

Just don't expect to see much of him (and let's face it, it will be a him...) outside your library on Boxing Day.