END_OF_DOCUMENT_TOKEN_TO_BE_REPLACED

The ratio of gold to Silver Bullion prices has just hit multi-year lows...

BACK IN 2002, my target for Silver Bullion prices was $187.50 an ounce, writes Chris Weber, editor of The Weber Global Opportunities Report, in Daily Wealth.

How did I get that figure? As I recall, the price of gold was at $300, and I thought it would soar enough to add another zero on that. But based on that figure, why did I divide 16 into it to get the $187.50? Because the traditional ratio of gold to Silver Prices, over the centuries, has been 15-16 ounces of silver equaling one ounce of gold.

That's what the Gold/Silver Ratio had been in 1792, when the US Dollar was born. It was often that way in the centuries before this. Most recently, at the peak of the precious metals bull market in January 1980, it reached this level again.

Certainly, there have been extremes at either end. In the 1500s, when Spain discovered so much new gold (and Silver Bullion) in the New World of South America, it shipped the gold home more than the silver. After all, one pound of gold was worth many times more than one pound of silver, so who can blame them for concentrating on mining and shipping gold over silver?

The problem was that, at the extreme around 1560, the supply of gold to the London markets became so great (relatively speaking) that it took only about six ounces of silver to equal one of gold. This extreme didn't last long.

At the other extreme, exactly 20 years ago, silver hit its bear market low of $3 per ounce, leaving the Gold Price's ratio rise over 100 to one. Silver had become almost ludicrously cheap. That's one of the reasons Warren Buffett stepped in to Buy Silver. But as he has admitted, "I got in too early and I sold too early." It would be another 10 years before silver's bull market would really begin.

In the years since 2001, silver has risen more than gold has. Silver Bullion prices have now gone up 793% since the November 2001 lows of $4.03. Gold has "only" risen 458% since its 2001 low. This means the ratio of gold to silver has changed. At the point when silver hit its most recent low in October 2008, it took nearly 90 ounces to buy one gold ounce. This was plainly too much and silver was too cheap. 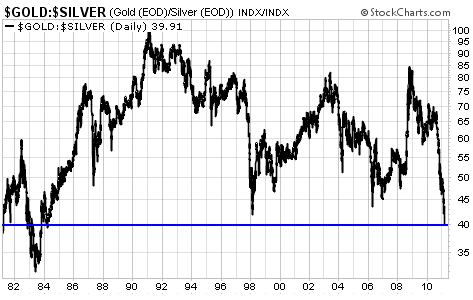 Regardless what the metals are doing in relation to paper currencies like the US Dollar, they have been remarkably volatile compared to each other.

During the grinding bear market of the 1990s, when both metals fell off of investors' radar screens, the gold/silver ratio plunged from 100 to just over 40 to one in just a few years. Several times, the ratio has visited this area. Each time, gold immediately proceeded to become relatively stronger. Silver's relative strength was not enough to move it further down...until now.

From the long-term perspective, we move to the very recent trend. Over the last six months, you see how the gold-to-silver ratio has been moving lower. Silver has been relentlessly moving up faster than gold. Back in early September of last year – just six months ago – the ratio was over 60 to one. Now, as I write, it has broken 40.

In other words, the ratio got to where silver's relative strength has been turned back several times in recent years...and kept going. On Monday, the ratio got as low as 39.32. It has since backed up a bit. But it has broken the boundary, and this is very bullish for silver.

In the latest issue of my newsletter, I told my readers to be prepared for the possibility that the ratio would be again turned back at 40. This would either mean that gold and silver would both continue to rise, but that gold would start to soar much higher than silver, or both metals would fall, but silver would fall more than gold. 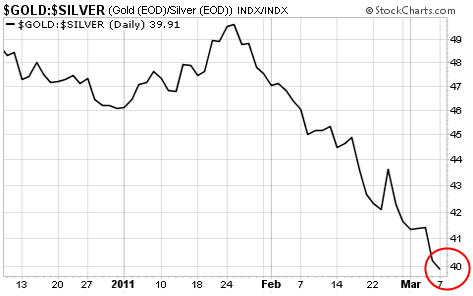 In that case, you'd want to make sure to own some gold along with your silver. That advice still stands.

But as I told my readers – and as you can see from the long-term chart above – the gold-to-silver ratio hasn't flatlined for decades: It's usually going one way or the other rather dramatically.