END_OF_DOCUMENT_TOKEN_TO_BE_REPLACED

...and silver. Because the monetary metals look well placed, boom or bust...

YET AGAIN last week, the minutes of the Federal Reserve's latest meeting gave cause for concern as they stated that the risks to the US economy had moved to the downside, writes Julian Phillips at GoldForecaster.com.

While this cannot be read as a forecast of the 'double-dip' recession, it moves it from possible to probable in our eyes. With the US and developed world (excluding Asia) supposedly on the path to recovery, it has been very "L" shaped. It is at that sensitive stage where it needs people to believe that it will get better and become supportive through spending and buying again. If the consumer, businesses and banks believe that may be postponed or even return to recession we are likely to see spending and buying slow quickly, so bringing on the recession.

On the other side of the coin, what if the recovery does gain traction and the US economy booms again, will that be bad for gold and Silver Prices?

There appears to be a misconception that a recovery will be bad for the monetary precious metals. Indeed, Goldman Sachs indicated that Gold Prices will continue to rise, but should the recovery gain momentum, it will be bad for gold. We could not disagree more strongly.

After August 2007, both gold and Silver Bullion prices pulled back as derivatives investors de-leveraged. Once these over-geared investors had left the market, the Gold Price recovered from $680 to the present levels and held there while the developed world economy stabilized.

What is the scene now? If the US and European economies recover, will less oil be used? Will less Dollars flow out of the States in the Trade deficit (that is already climbing). Will China shrink? Will the memory of all that took place in 2007 go away and leave consumers again blissfully spending as though there is no tomorrow and credit is endless? 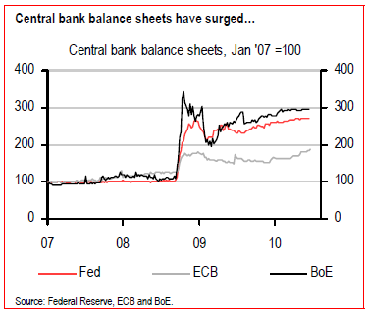 Since 2007, many, many structural faults were exposed in the global economy and have sensitized everybody to the dangers we face on so many fronts, such as exchange rates, relying on consumers for growth, insufficient oil to supply a far larger and still burgeoning China alongside a growing, developed world. Add to that, key exchange rates that are so volatile they can move several percent within a week. Add to that, the possibility that quantitative easing may need to be turned on again to increase much further the quantity of money out there. Worse still, the banking crisis that started the crisis has morphed into a Sovereign Debt crisis that has put the lender's of last resort in a confidence crisis and along with that fears for the survival of the Euro.

A new recession on top of all of that together with more quantitative easing is unlikely to spawn the hope that it did first time round. The crisis to date has vastly altered all of our perceptions, adding a good degree of skepticism to the repeat of the past rescue measures. We have to ask, would they be reinforcing failure?

So what lies ahead now? Boom or bust, either way our fears remain. The future points to more crises and those on an already weakened world. In fact the 'bust' we are still experiencing has probably saved the developed world from a bigger one. The time it has taken, to date, should have been used to:

Has this happened? Instead the aim of central banks and government appears to be to get back to where we were in August 2007, when the crisis first struck. To blame the banks for it all is unreasonable. Maybe they do deserve to be accused, but to turn them into the only scapegoats is not fair. Consumerism was out of hand, house prices were way over the top, the developed world lived with the attitude, "Live now, pay later".

Everybody was to 'blame'. But has the time passed been used to change attitudes? Look at China and ask why they are developing so strongly from the ground up?

The point we are making here is that recovery is only a small part of the solution. The other steps to developed world economic health have not been taken. Structural faults are now, not only exposed, but threatening new fractures. With China's power and wealth increasing, in part, at the expense of the developed world new pressures are being added to the developed world all the time.

Structural repairs are not fully on the agenda of developed world authorities, so we must experience more fractures as a result.

What if Chinese goods were priced only in the Yuan? What if they only accepted the US Dollar for US trade? What if the oil price were priced in the main currencies of the world, not just the US Dollar? This has to happen in time, should China continue to develop at the present rate.

Against the backdrop we have just described, does it seem likely that we are near the peak of the Gold Price? Gold is the thermometer of the monetary world. Would you say the temperature is still rising? Do you see a, "and they lived happily ever after" picture in two years time? So what does lie ahead for gold and by extension silver? How long will the bull market run for still? Is it simply a 'bull market? We talk of that in our newsletter, at length.