END_OF_DOCUMENT_TOKEN_TO_BE_REPLACED

The challenges facing September's record as the best month for Gold Prices...

SEPTEMBER has been the best time to Buy Gold in terms of its month-on-month price appreciation over the past four decades, writes Frank Holmes – CEO and chief investment officer at US Global Investors – in Bill Bonner's Daily Reckoning.

You can see this on the chart below. In a typical year, the price of gold in September rises 2.5% above its August price. And since 1989, the Gold Price has risen in 16 of the 20 Septembers, by far the best success ratio of any month of the year.

What accounts for this seasonal trend? 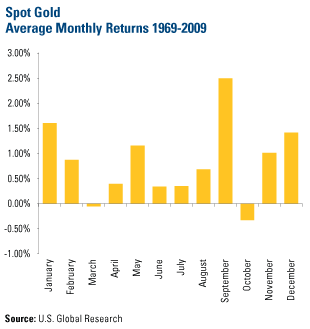 September kicks off several of the planet's most potent gold-demand drivers:

Now, this could be a challenging September in India, the world's largest gold consumer. The economic slowdown and gold prices near record highs drove jewelry demand down 31% in the second quarter compared to the same period in 2008.

On the other hand, the World Gold Council says India's bank deposits saw 22% year-over-year growth in the second quarter of 2009, so cash is available to be spent if the Rupee price for gold weakens even slightly.

The WGC also expects the wedding and Diwali season to "underpin a seasonal improvement over the remainder of 2009."

China, the world's No.2 gold market, actually saw a year-over-year gold demand increase of 6% in the latest quarter, with buyers favoring 24-carat gold jewelry for its quality and as a store of value. The WGC says that trend toward the purer form of gold should continue, though the third quarter is usually the low season for this segment of the market.

While September is a good month for Gold Bullion, it has also been a great month historically for Gold Mining stocks, as measured by the NYSE Arca Gold Miners Index. The GDM index comprises a broader collection of gold miners – including more smaller-cap companies – than either the NYSE Arca Gold Bugs Index (HUI) or the Philadelphia Stock Exchange Gold and Silver Index (XAU).

After the typically soft months of June and July, the gold miners start to bounce back with a 2% bump in August before shooting up another 8% in September. Since 1993, when it was created, the GDM has been up 11 times in September and down just five times.

In September 1998, the GDM had by far its best-ever month (up 54.3%) when the price of bullion was bouncing off a two-decade low price beneath $275 per ounce. A decade later in September 2008, however, amid the severe credit squeeze triggered by the global financial crisis, the GDM fell 10.2%.

The strong correlation between the Gold Price and the value of gold- mining stocks explains much of the average September jump for gold stocks. But the relationship is not lock-step. Gold stocks (particularly for companies that do not hedge their production) have historically offered leverage to the Gold Price – both up and down. In up markets, earnings growth has tended to exceed the increase in gold. Leverage also works in the opposite direction, of course. Gold stocks also tend to decline more when the price of bullion is falling.

One of the most consistent correlations for gold is its inverse relationship with the US Dollar. When gold is up, the Dollar tends to be down, and vice versa. Looking at weekly data going back 20 years, this relationship occurs nearly 70% of the time. And September is only second to December in terms of Dollar weakness, the average result for the US Trade Weighted Dollar Index (DXY) being a 0.66% decline from August.

Looking at the 39 Septembers going back to 1970, the Dollar has seen negative performance 26 times, more than any other month of the year.

Here in 2009, the Federal Reserve's massive stimulus spending and the expectation that the current low-interest-rate environment will continue for many months to come are additional headwinds for the Dollar, and thus look to be positive for gold.

In our June commentary – "Why the Time Could Be Right for Gold Stocks" – we pointed out that gold stocks tend to outperform the overall stock market when the federal government is engaged in deficit spending. This year's federal deficit is expected to be a record $1.6 trillion, and the White House projected last month that the deficit will grow another $9 trillion between 2010 and 2019. These huge deficits will fan inflation fears and keep downward pressure on the Dollar.

Based on the long-term record, this may represent a good time for investors who want to establish or add to a gold or gold-stock position in advance of seasonal demand growth. The guidance provided by historical patterns may improve the chances for investment success, but of course, there are no guarantees that this September will follow the well-established trend.