END_OF_DOCUMENT_TOKEN_TO_BE_REPLACED

The seasonal turns in Gold are being overtaken by macro-economic & monetary events...

IN THE PAST the Gold Market has been seasonal, writes Julian Phillips of the GoldForecaster.com, with the rule being "Sell in May and go away".

This summer season – marking a lull in demand – usually lasted until the middle-to-end of August, with the main demand for physical Gold Bullion appearing in the final quarter of the year. That then drove Gold Prices higher, lasting until the end of May once again.

Will Gold go through the same seasons this year? Is seasonal demand going to impact the Gold Market? Bear in mind that a big fall has happened already in April.

The heaviest influence on this seasonal pattern of Gold Prices has been jewelry demand from India, where as much as 850 tonnes of gold per annum was imported in previous years. This demand from Indian jewelry buyers was, in turn, driven by the weather.

In the past, 70% of India's gold demand came from the agricultural sector, all of which is dependent on the weather and seasons. And after May, crops have to be planted ready for the coming monsoon rains, bringing the crops to fruition in the early-to-middle parts of August.

In India, Gold means far more than just jewelry for adornment, however. It has religious connotations as well as financial importance. Gold makes an auspicious investment during the Hindu festival season, for example – most especially the Diwali festival in October.

What's more, in a country where respect for the civil service, appliers of the law and the tax authorities is extremely low, the attraction of changing your tax-free agricultural profits into Gold and property – and then slipping under the tax radar – is often irresistible.

Another key feature of gold's seasonal demand in India – where family remains the heart of society – is the bridal dowry. Wives don't own assets, but they can own cash, and this gift from the bride's parents is to ensure that the new couple start their married life with financial security.

This powerful tradition makes the "marriage season", which comes to an end in May, one of the important factors in the pattern of demand for gold. The climax of this demand also comes together with the Akshaya Thrithiya festival – marked on 7th May in 2008.

It is auspicious to marry in this season, again tying gold together with religious faith.

In the Western world, the gold jewelry season also becomes becalmed mid-year, as the Christmas and New Year present-giving festivals are furthest away.

The Gold Market then faces a global situation akin to the "Doldrums" – a feature of the Atlantic trade winds between South America and Africa, where the wind suddenly drops and leaves sailing ships stuck, waiting for the trade to winds pick up again. But a glance at the last few years shows a distinct break in that pattern.

Take a look at the chart just for the last couple of years, which serves for the purpose of illustrating our point. 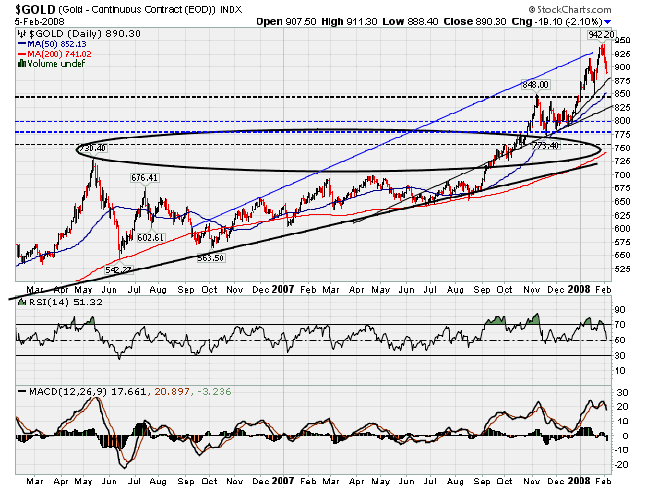 Right in the middle of the end-May to early-Sept. period during 2006, you can see the Gold Price suddenly begin to take off from $542 to the mid-600s, starting from early June to mid-August and actually drifting until mid-October.

In 2007 the doldrums returned and Gold was uninteresting again until the outbreak of the sub-prime crisis – but was the surge in Indian demand seen during the Akshaya Thrithiya festival last year then failed to hold as these other events began dictating the Gold Price.

The seasonality of gold, in short, is being slowly overtaken by macro-economic and monetary events that dictate the Gold Price today. For the full report, please visit GoldForecaster.com...