END_OF_DOCUMENT_TOKEN_TO_BE_REPLACED

The rate of return from Gold Investing beat everything else since 1999. So what next...?

HOW ARE WE DOING? asks Bill Bonner at The Daily Reckoning.

Our Trade of the Decade, that is. How's it working out?

If so, it should soon bounce back. If not...well, who knows?

But our Trade of the Decade doesn't worry about what the metal does on a day-to-day basis. Back in 1998, we just noticed that the gold/stocks relationship had reached an absurd extreme. It took 43 ounces of gold to buy the Dow stocks. We figured that ratio was bound to come down.

It has. At today's prices, you can buy the Dow for less than 10 ounces of gold. 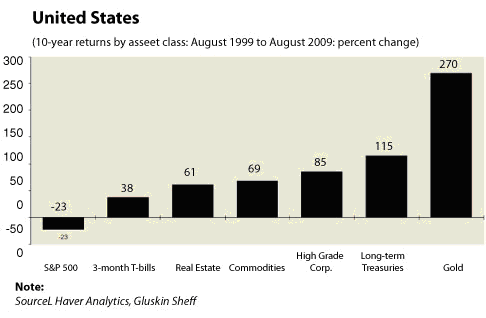 Buy Gold on dips; sell stocks on rallies. It was good advice 10 years ago. Is it still good advice?

Of course, it depends on what happens next. If the feds succeed at inspiring growth without also causing higher levels of inflation, Gold will be a bad place for your money – relative to stocks. But here at The Daily Reckoning we are cheerfully, confidently, and calmly enjoying a depression. We don't think it will stop any time soon.

What that means to us is that stocks are not likely to go up. And we don't expect inflation to increase anytime soon either. So, as to gold itself, that puts us in an ambiguous position. On the one hand, depression will probably not push up Gold Prices – at least, not at the beginning. On the other hand, it won't push up stock prices either.

On the one hand, the economy is probably going to sink further. Recent news brought the rally in stocks to a halt. The rate of existing house sales fell in August, following four months of gains. The Dow fell on the report.

But it's very hard to make a diagnosis on this patient. He's so doped up. The Fed pumped $2 trillion worth of drugs into the economy. It won't say exactly what elixirs it used...or what veins it put them into. But all this money must have an effect. Federal employment, for example, is rising.

Here, an aside. When people get government jobs, the employment numbers increase. But is the economy better off? It depends on what the people are doing, doesn't it. If you think additional federal workers add to our prosperity or the quality of our lives...well, you probably shouldn't be reading The Daily Reckoning. In our view, the feds already had too many parasites on the payroll.

But if the feds can make the world a better place, let's hire more of them! Heck, let's all work for the federal government.

Even with rising federal employment, however, the economy is still sinking. One headline tells us that luxury hotels may be headed for bankruptcy; their $850 rooms are empty. Another tells us that there are people living in the drainpipes under Las Vegas. Obvious solution: give the drainpipe people jobs with the government...and put them up in the luxury rooms! Hey...they can call room service and stimulate the economy even further.

The US Post Office has a problem too. It may need a $4 billion bailout, says one news item. Another tells us that "exhaustion" has hit a new record. "Exhaustion" refers to people whose unemployment benefits have run out. Apparently, more than half the unemployed run out of benefits before they find a new job – more than ever before.

Which brings us to the other hand. Without a real recovery in the real economy, the feds are going to keep their hands on the pumps. While the depression decreases the odds of inflation...the feds' reaction increases them.

Of course, gold doesn't always need inflation to rise...and stocks can do what they want. So let's see:

On the one hand...on the other hand... Harry Truman once remarked, "Send me a one-armed economist." We're tempted to cut off one of the hands ourselves.

But let's forget the hands. Major trends tend to run in long, long cycles. Consumer credit has been expanding since 1945. It is contracting now. That trend is not likely to end after just six quarters. Instead, it is likely to continue for a long time. And it is likely to inspire tremendous exertions to stop it on the part of the feds. As to the exact type of 'flation that will result, we can only guess that there will be more of it. As to stocks, we guess that they will decline – in real terms – as long as the credit contraction continues. And as to gold, it is sure to go up and down.

Today, 24 ounces of gold is worth about $24,000. Can you buy a new car for that? Well...yes, you can. But not a new Buick. The 2009 Buick Lucerne sells for more than $29,000. So maybe gold is a little low. But not much. In a stable, prosperous and growing economy, $1000 gold might prove no bargain. But what about a world that is probably in a multi-year depression...that the feds are fighting with trillions of Dollars' worth of new cash and credit? What about a world where the world's largest debtor is borrowing another $9 trillion over the next ten years? What about a world where the imperial power is losing its grip? What are the odds that something will go wrong? What are the chances that the feds will miscalculate? And what will happen if they do?

Possibly, the depression will deepen...and $1000 gold will seem too expensive. Possibly, the feds will add too much new money to the financial system, causing a new bubble in gold. Possibly, the Chinese will dump the Dollar...causing the Dollar and the US bond market to collapse.

Until the picture becomes clearer, we will stick with our trade...