END_OF_DOCUMENT_TOKEN_TO_BE_REPLACED

Will Gold Prices crash if the US slips into recession...?


RIGHT FROM THE early 1990s through to today, Americans have maintained their life style by borrowing. But as the US consumer is about to find out, the bill for that life style is coming due.

Where will that leave the US economy? Simply stated, surveying the landscape of current events – many of which are a direct consequence of excessive debt and an inevitable slowdown in consumer spending – we expect stagflation ahead.

Loosely defined, that term refers to a general economic slowdown – a recession – but coupled with rising prices triggered by massive infusions of cheap money into the market.

That liquidity can come from governments – witness the billions upon billions now being thrown into the fray by the world's central banks – or it can come from, say, some percentage of the $6 trillion and more held by foreigners coming home to roost.

And it's worth noting, on this latter point, that in recent weeks there has been almost daily news about foreign corporations and sovereign wealth funds unloading their greenbacks in exchange for shares in some of America's largest financial institutions. Our founder here at Big Gold, Doug Casey, has correctly pointed out that it is when the trade deficit starts to shrink, which it recently has, that you need to look for cover...because, among other things, it means the tide of US Dollars is beginning to wash back up on US shores.

Our view is that the stagflationary scenario is the most likely, and it's supported by a steady stream of data. For instance, despite an obvious slowdown in 2007 holiday season shopping, the Bureau of Labor Statistics reports that producer prices in November increased at the fastest rate in 16 years.

Rising prices make a stagflationary environment positive for Gold Investment, if for no other reason than that investors reallocate depreciating paper-backed investments into tangibles with a demonstrated ability to float as the intangibles sink.

So our view remains that we are headed for a stagflation. But like all good investors, we want to challenge our view to check that we're right. What if we are wrong? What happens if the global economic crisis gets so bad that it trumps any and all inflationary influences and we enter a straight-up deflationary recession?

That is, we are sure, a question on the minds of many people Buying Gold today. So here are our thoughts...

Gold in a Recession

Traditionally, gold has been a safety net against inflation in the cost of living – which in fact means a loss of value in official currencies. Inflation is good for gold, a case we don't need to make again here.

But, in a typical recession, the demand for everything slows and the prices of many things fall. The knee-jerk reaction of most casual market observers, therefore, might be that if inflation is always good for gold, then the opposite must always be bad.

Historically, however, that is not the case. The chart below shows the Gold Price overlaid against official periods of recession as defined by the National Bureau of Economic Research. As you can see, about half the time gold actually rises in a recession. 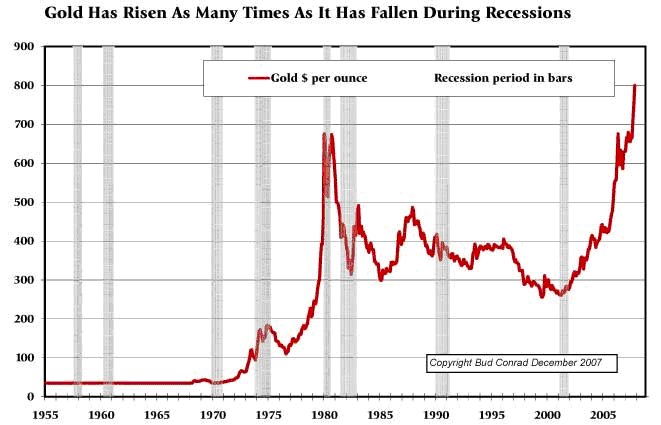 (Note: This chart uses monthly averages; so you can see just how high current Gold Prices are, in nominal terms, compared with the previous record of Jan. 1980...)

Simply put, there isn't a specific historical precedent that demonstrates that gold will fall during a recession.

But could we have a general deflation – a depression so severe it causes prices to fall and the value of money to rise...a deflation that might tip gold into one of the down cycles?

Well, of course that's a risk. The developing recession, based as it is on a global contraction in credit, looks to be especially long and deep. Almost daily now we learn of multi-billion-dollar debt defaults. Those, in turn, trigger both a freeze-up in easy credit and a flight from risk.

In response, the US government has responded with its predictable "fix-it" tools – stimulus and bailouts. The tools of government stimulus are lowering the Fed funds interest rate, and potential new large-scale bailouts like the Resolution Trust Corporation (RTC) that was put into action to straighten out the Savings and Loan crisis of the 1980s. That cost something in the region of $200 billion.

And while the Europeans have just unleashed an amazing $500 billion in new liquidity, so far, US Treasury Secretary Paulson and Fed Chairman Bernanke and friends have been surprisingly slow to act. They started with denial and have moved to inadequate band-aids.

In the absence of any concentrated and well-funded program – such as the RTC – to try and keep the wheels from falling off the economy (and, at this point, it is not clear that any imaginable measure will suffice), the deflationary pressures of the housing collapse are winning.

But there is an important, longer-cycle pressure that is not talked about much, although it is increasingly obvious to the American consumer: the Dollars they're spending are buying less.

They see gasoline and heating prices rise, but don't think much about the Dollar itself as the underlying source of price inflation. Yet this decline in the purchasing power of the Dollar is extremely important for the price of Gold.

That's because the pressures on the Dollar seem overwhelming when aggregated: huge budget and trade deficits, wars and retirement demands of baby boomers, unprecedented foreign holdings of US dollars. Watching the prices of internationally traded goods, including oil at $90 per barrel and wheat at a record $10 per bushel, it is hard to imagine a situation of serious deflation emerging.

Gold in Recession: A Clear Alternative to Treasury Bonds

The flight to quality by investors who no longer trust packages of mortgage loans, or anything that is not strictly labeled as government backed, is unprecedented. The interest rate on government-issued two-year Treasuries has sunk to 3% as the yield has been squashed by the panic to buy them, reflecting the demand for safety. Concurrently, however, shorter-term interest rates have risen in response to increasing mistrust and uncertainty.

Gold, of course, provides a different form of safe harbor alternative – an asset that is not only readily liquid but, unlike government paper, positively correlated with the very same inflation that will erode the purchasing power of paper assets.

Right now, gold is not on the front burner, but this is only to be expected because of the state of flux in global financial markets. Indeed, the market is confounded by the sheer magnitude of all that is going on, from the devastation being wreaked on the world's best-known and most established financial institutions, to the unleashing of billions upon billions in experimental new liquidity measures by central banks.

As the fog of war begins to clear – and as it becomes obvious that not only will economic growth be severely curbed, but that the fiat currencies are going to be sacrificed in the fight – some percentage of the funds now sitting on the sidelines, much of it in US Treasury bonds, will begin to move into Gold Investment and other tangibles.

In the face of limited gold supplies, this surge in demand should create strong upward pressure on the price of gold and, for leverage, gold shares.

To conclude, even though the relatively sluggish and inept responses from the US government in the face of the current credit crisis could produce a severely slowing economy, creating periods of deflationary fears that put stress on the Gold Price, we continue to believe that the most likely case is for massive inflationary bailouts that support a positive outlook for everyone choosing to Buy Gold right now.

Bud Conrad and David Galland are, respectively, the chief economist and managing editor with Casey Research, publishers of BIG GOLD, an inexpensive monthly advisory dedicated to providing unbiased and actionable research on simple, effective and cautious ways to participate in rising Gold Markets.