END_OF_DOCUMENT_TOKEN_TO_BE_REPLACED

If "Quantitative Easing" is a dangerous drug, then Gold Investment is the antidote...

A surprised Wall Street bolted sharply higher after the Fed said it will use "all available tools" to jump-start the economy. "Weak economic conditions are likely to warrant exceptionally low levels of the federal funds rate for some time," the Fed added, slashing interest rates to between zero and 0.25% in New York's interbank market.

The initial knee-jerk reaction sent the Dow Jones Industrials surging 360 points higher, and the number of stocks advancing outnumbered those declining by 5-to-1 on the New York Stock Exchange.

But Quantitative Easing – the Japanese-born strategy of injecting more cash into the banking system than is needed to peg the overnight interest rate near 0% – is a dangerous drug. It produces changes in perception, thought, and feeling, ranging from distortions of what is sensed (illusions) to sensing objects where none exist (hallucinations).

Quantitative Easing can thus transmit false perceptions about the health of the economy and the direction of the stock market. 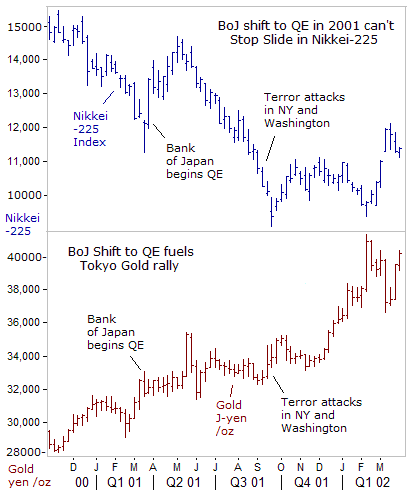 Looking back at history, on 19th March 2001 – when the Bank of Japan formally announced its adoption of Quantitative Easing, it gave an instant jolt to the Nikkei 225 stock index. Tokyo stocks surged 10% higher in a single week to 13,200, and then extended that to a 22% gain at 14,400.

However, after two-months, the Quantitative Easing trip soon wore-off, and the Nikkei reverted back to its bearish trend, tumbling 45% to the 9,500 level. Nearly a year after the Bank of Japan adopted its Quantitative Easing framework, the Nikkei was still languishing 5% lower, but the Tokyo gold market – in contrast – was enjoying the ride of a genuine bull market.

The Gold Price in Yen climbed 30% higher to ¥40,000 per ounce during 2001. In 2002, Japanese investors bought 65 tonnes of Gold Bullion, one quarter more than the previous years, amid worries about Japanese bank deposits.

Even today, the Nikkei is hovering near 8,600 – some 28% lower than in March 2001, when the BoJ unveiled its Quantitative Easing approach. The Bank of Japan remains apprehensive about getting hooked on Quantitative Easing again, but it might have no choice but to get a fresh habit to prevent the US Dollar from sliding into free-fall against the Yen.

Japanese investors understand that the only true antidote for QE, the hallucinogenic drug administered by central banks, is the "yellow metal". 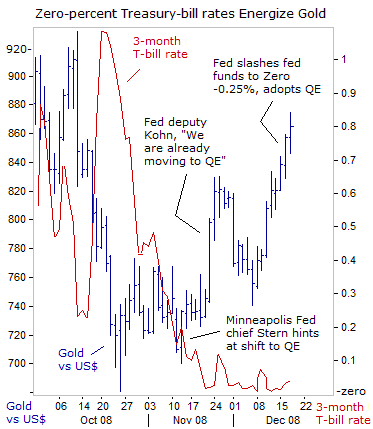 "As a result, we have to be very careful about withdrawing [the narcotic] before it sparks a run-up in inflation," he said. Yet with "Bubbles" Bernanke in charge of the electronic printing press, US traders are now betting the Fed will keep interest rates pegged at zero percent long after inflation has returned to the economy.

Which is why the gold market has already left the train station.