END_OF_DOCUMENT_TOKEN_TO_BE_REPLACED

This would be funny, if it weren't so sad...

SOMETIMES it pays to take a step back and look at long term charts to remind ourselves of the trends in place, writes Gene Arensberg at his GotGoldReport.

The chart below shows the Gold Price, monthly, since 2001. 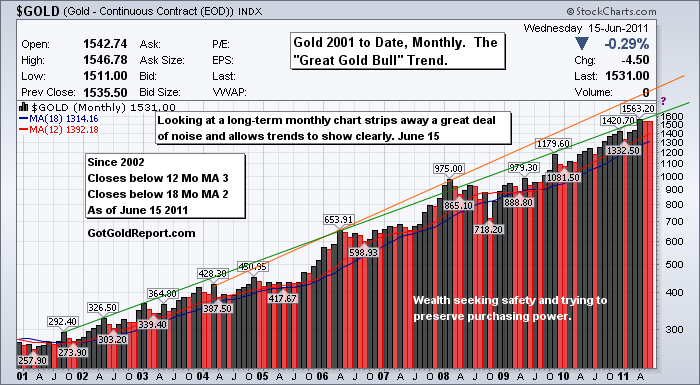 Causes? Here are a few familiar ones. A loss of confidence in governments that have abused the privilege of borrowing and printing to "pay" for stuff government should not be doing in the first place, racking up unimaginable sovereign debt; a collective loss of confidence in pandering politicians that forgot or never knew the meaning of sound money; flagging confidence in all fiat currencies and real, very real terror of the loss of purchasing power are some of the factors underpinning the trend we see above.

One of the cruelest ironies is that the politicians will blame the folks in this next graph and blissfully ignorant, ordinary people will believe them.

Continued… (Please note: If easily offended by political commentary, or if you have bought into the popular myths of the day, stop here so we can remain on speaking terms.)

Actually the political class is already blaming the banks. There is little hope of that ending anytime soon with the US presidential election ramping up.

The next chart shows Goldman Sachs' stock price, over two years, weekly, as a proxy for banks. 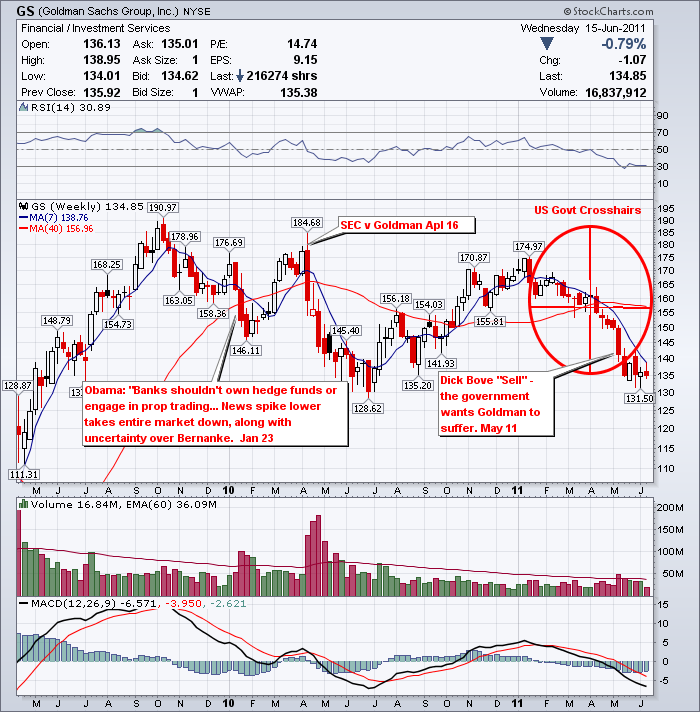 The banks would never have been able to do what they did without the confetti money governments have flooded the economic universe with since 1971, when the last ties of the US Dollar to gold were permanently severed. When even governments could no longer exchange paper Dollars for gold the Dollar lost all of its power to reign in government spending or keep the pols from abusing it.

Blaming bankers for the mortgage/credit bubble is no different than blaming an alcoholic for getting drunk while minding the national liquor store. But they (bankers) sure do make easy targets for slick, immoral and unethical pols with machine gun tongues, unlimited legal resources and the bully pulpit …and a willing, eager, guppy-press that wouldn't look past the curtain if they could.

We find it very sad that the American people are apparently oblivious to their own financial rape by the very people they elected as stewards of the public trust, treasury and defenders of the Constitution.

The results are in and they are conclusive. Congress has been neither stewards worthy of trust, nor defenders of our sacred heritage. Gold is a measuring stick of that. Indeed, precious metals are one of few ports in this man-made storm.

Perhaps it is fitting that the burden now falls back on the taxpayers who, through collective apathy and willful disrespect of what made America great, voted the miscreants into to power. America is getting exactly what it 'asked for' good and hard.

And now the politicians are going to teach each other a 'lesson' using the debt ceiling? If that wasn't so frighteningly sad it would be hilarious. But it sure might be good for the Gold Price.

Discover the best way to Buy Gold online at BullionVault...