END_OF_DOCUMENT_TOKEN_TO_BE_REPLACED

The biggest moves – both down and up – could still be ahead...

IT IS UNDERSTANDABLE that investors want to know where the precious metals market is headed next, writes Casey Research senior editor and strategist Louis James.

And not just because big fluctuations can be nerve-wracking, but because it makes a big difference how you'd invest today if, for instance, you think there's a big correction ahead (save cash to buy cheaper) or not (load up and ride the wave).

But the reality is that I don't know. Nobody knows what will happen next.

That's why it's called speculation.

And that, in turn, is why we at Casey Research still have quite a bit of concern and uncertainty about a possible correction in the near term, even though the Casey Consensus is unanimous in projecting rising prices for precious metals for years to come.

Some investors are tiring of our cautioning of a "possible correction," "waiting until you see the whites of their eyes," and so forth. Some wish the market would stop dithering and just head north into mania territory. Or wish Casey Research to stop dithering and just start issuing lots of Buy recommendations. But other, more nervous readers seem to wish we'd just admit that the market has topped and issue a Sell on everything – time to cash in our chips and go home.

I am sympathetic, but Mr. Market doesn’t know our desires and wouldn't care if he did. Anyone who claims they do know is likely a former New York bridge salesman.

This is why we've been steering a middle course for some time. We're not out of the market; many of our recent picks have done spectacularly well on the back of the Gold Price's new nominal high. But we're also not all in.

Let's look at a simple snapshot of our most fundamental trend, the Gold Price. Compare this chart of the Spot Gold Price over the last year with the one below it, showing the same thing during the months before and after the 1980 spike. Does it appear to you that we've hit the same sort of peak? Me neither. 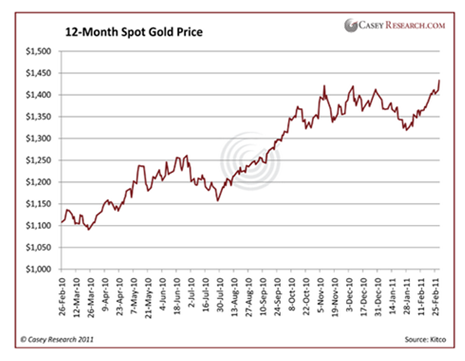 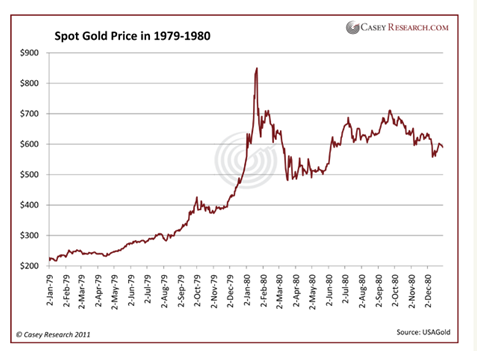 Of course, history seldom repeats, although it does rhyme. Here’s a 10-year chart of gold during the current bull market. 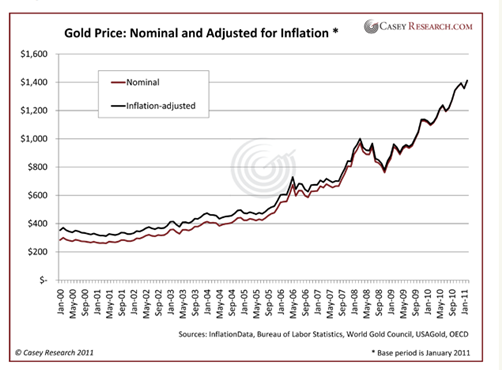 This chart looks a lot more like, if not a spike, at least a price peak that could now be set to slide downwards for the next 10 years.

But don't forget gold's biggest picture, the inflation-adjusted price since it was set free by Nixon in 1971. 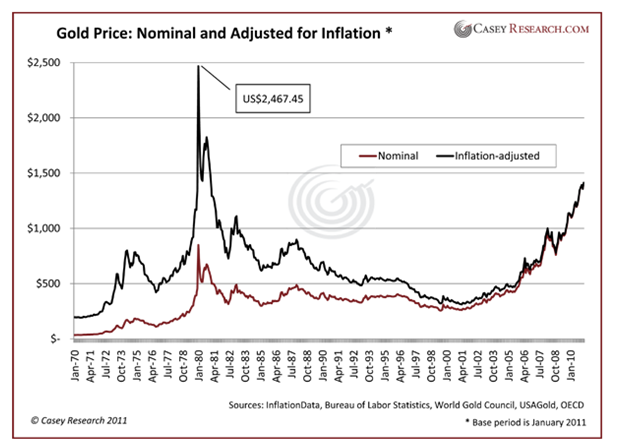 In nominal terms, gold certainly seems to have scaled its prior peak; in real terms, it's still got a long way to go to beat the 1980 spike.

All of the economic and financial factors that have contributed to this precious metals bull market remain in force, and many of them have worsened. And if a big and broad market correction hits us again, the precious metals and related stocks will get squeezed, if only temporarily. The 2008 crash proved that such a squeeze can be very sharp and painful – even for groups like ours that did see it coming.

Assuming you agree with me and the Casey Consensus that this metals bull market is going to produce a gargantuan Mania Phase that lies yet ahead, I'd like you to try a mental exercise:

Ask yourself what would happen if the current sharp rise is actually rhyming with the sharp rise in the early 1970s, not the big run-up to the 1980 peak. If so, and if history continued rhyming, that would put us before the biggest gold correction, and ahead of the mania.

Looking to get exposure to movements in the Gold Price? Get access to lives prices – seven days a week – with BullionVault...