END_OF_DOCUMENT_TOKEN_TO_BE_REPLACED

The SUPPLY OF PAPER currencies is infinite; the supply of gold is finite. This striking contrast provides an excellent reason to exchange the former for the latter, writes Rob Marstrand, chief investment strategist for the Bonner & Partners Family Office, in Bill Bonner's Daily Reckoning email.

The gold supply is limited...very limited. According to one estimate, all the above-ground gold in the world totals between 120,000 and 140,000 metric tonnes. Let's split the difference and call it 130,000 metric tonnes (about 4.2 billion troy ounces). If you brought it all together and made it into a gigantic cube, it would measure about 19 meters along each side – about three meters short of the length of a tennis court.

Furthermore, about 20% to 25% of all the gold is stored in the world's central banks as country reserves. So the total amount of gold in private hands is enough for just 14 grams for each living person – that's less than half the quantity of a standard one-ounce coin like a US Gold Eagle or a South African Krugerrand Gold Coin.

At present, only about 2.25% of the world's total wealth – or 4.5% of world's financial wealth – is allocated to gold, including jewelry. But resurgent inflation could raise that percentage dramatically, while raising the Gold Price dramatically in the process.

To gain perspective, let's examine a brief history of the Gold Price relative to US inflation. The Gold Price peaked in January 1980 at $850 per ounce. But this peak was very brief. Gold jumped 29% alone in the run towards $660. Probably a better reference point for the market top is the average price during 1980 as a whole. This was $615/oz. Since then, the Gold Price has increased only 125%.

Over the same timespan, however, the government's most widely quoted inflation gauge, the Consumer Price Index (CPI), has increased 185%. Therefore, if the Gold Price had increased as much as the CPI, it would be selling for $1753/oz today, not $1390/oz. But the official inflation figures might not be the real story.

Using alternative inflation figures calculated by ShadowStats.com, consumer prices have soared an astounding 789% since 1980, which means that the inflation- adjusted Gold Price would be $5,467/oz. 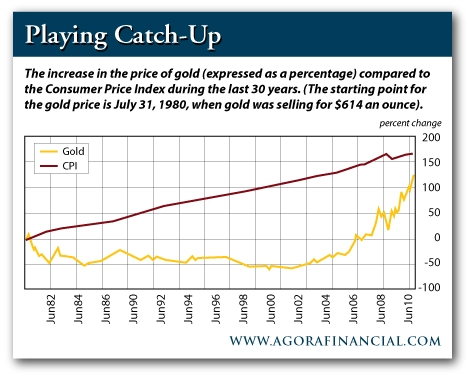 Therefore, during this 31-year period – through gold's full bull and bear market cycle – the Gold Price advanced 674%. Over the same timeframe, the ShadowStats inflation measure advanced a nearly identical 688%. By contrast, the CPI increased only 370% during this period. In other words, the cumulative CPI readings from 1970 to 2001 failed to account for all the inflation indicated by the rising Gold Price. The ShadowStats figures, on the other hand, were pretty much bang on target.

I'm staying conservative, and there's nothing to suggest that just because using the ShadowStats inflation worked for the bear market lows it will work for the bull market highs. But if the ShadowStats figures above are a guide, then maybe they point to a price north of $5,000/oz for gold – or even $7,000 for a short time.

I've just thrown a lot of numbers at you. But the point is this: gold looks like it has plenty of upside. But let's be really clear about one thing. I'm not making a hard prediction or setting a price target here. These figures just provide reference points. We also need to watch out for gold "going mainstream" – when references make their way into TV programs, when taxi drivers start talking to you about gold and when your mother calls to ask how to buy an ounce of the stuff.

None of this is certain. And it most likely won't happen smoothly. There could even be big corrections along the way – like between December 1974 and August 1976 when gold fell 47% before powering ahead again. But I hope I've shown you that there are good reasons to think that gold still has plenty of room on the upside.

Conclusion: If you own plenty of gold already, then hang on for the ride. If not, Buy Gold on the dips.