END_OF_DOCUMENT_TOKEN_TO_BE_REPLACED

Sell-offs are part-and-parcel of a mania phase...

FOR ALMOST a year the Gold Price has been rising steadily, with nary a correction, writes Jeff Clark, editor of Casey Research's Big Gold newsletter.

It fell only 4% last month, and the biggest decline since last July was January's 6.2% drop.

These barely register as "corrections" when one considers that we've had 18 of them greater than 5% since the bull market began in 2001.

We're getting used to a persistently rising Gold Price. Any decline is met with more buying, pushing the price to new highs. But how long can we realistically expect this pattern to continue?

The answer will ultimately be determined by the fundamental factors pushing on the price – more Greece, more money printing, and more economic bad news will all drive gold higher. But even then, have we really said goodbye to big corrections?

History can provide a clue. If we could find a time period within a gold bull market where the price sidestepped major falls, then it might be reasonable to think we've entered a period where it will continue steadily climbing. On the other hand, if gold saw big corrections even during, say, a mania, we might need to be on the lookout for them no matter how bullish the factors are today.

Here's a chart of the corrections that occurred during the final two years of the 1970s mania – one of gold's biggest parabolic runs in history. 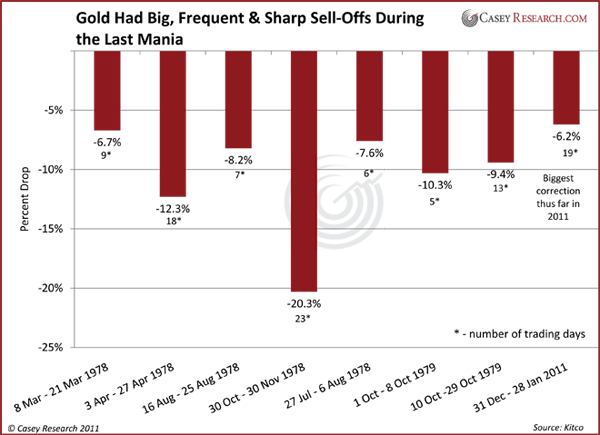 During this historic run, there were seven significant corrections. On average, that's one every three-and-a-half months and a 10.1% decline. You'll also see that they were very sharp; four lasted less than ten trading days and all were less than a month. This all occurred in the middle of the mania.

If history is any guide, our correction in January was small, and will be the first of many.

In fact, historical precedent shows that volatility is the norm, even during the Mania Phase of a gold bull market. Big moves, both up and down, are common. I can't point to a date on the calendar, but sooner or later we're going to have another downturn, and it won't be the only one.

This means that great buying opportunities will present themselves regularly. And not just for gold but also for silver.

Cut out the middleman and deal direct when you Buy Gold through BullionVault...