END_OF_DOCUMENT_TOKEN_TO_BE_REPLACED

A look at the Gold Price from the supply side...

WHAT IS happening on the supply side of the Gold Price equation? asks Louis James, chief metals and mining investment strategist at Casey Research.

The most important source of gold supply is mine production – which is responsible for about two-thirds of the total – followed by recycled gold. While recycled gold is the reason supply is inelastic, new production has more predictive power since it can reflect shifts in industry conditions and investor sentiment.

Starting with a bird's-eye view, take a look at global gold production since 1900. 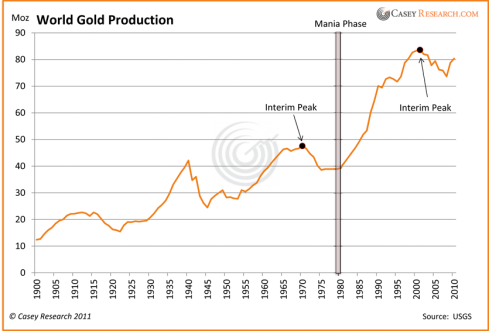 The 1980 gold mania occurred when gold supply had the same structure as it does today: two-thirds from production and one-third from recycled product. As the chart shows, in the 1980s, production increased after the short-lived mania came to an end, while this time around, production has already gone up (more on that below). Also, as the 1980s wore on, production grew in spite of the price falling dramatically.

History doesn't repeat exactly, but it often does rhyme, so comparing the 1970-1980 decade to the present can give us a useful context for thinking about gold today. Reviewing the data available, here are some key comparisons:

1. The previous major interim peak in mine production was recorded in 1970, followed by a 10-year decline and ultimately, the 1980 peak in the Gold Price. It's interesting to note that the mania occurred when gold supply was flat.

This recent increase in production without a market mania beforehand could be seen as an argument against there being a mania this time around: There's no supply crunch. Supply could keep up with demand and prevent the crunch from happening. We don't see this being likely for several reasons, foremost among which is that we don't see the increases in production being sustainable. Mines are by definition depleting assets, and it gets harder every year to permit and place new mines into production.

2. Global gold reserves in 1980 tallied 1.1 billion ounces (34,000 metric tonnes), and production at that time was sufficient to meet demand at the time for about 20 years. In 2010, reserves were 1.6 billion ounces (51,000 metric tonnes) and were also sufficient to meet demand for an identical 20 years, but production was twice as high. Much of this can be attributed to improvements in mining technology that, coupled with higher prices, allow larger, lower-grade deposits to be mined profitably. Again: no supply crunch.

Not yet, anyway. In addition to the increasing regulatory burdens, the discovery process has grown more arduous. There are new technologies that have made some things much easier, but overall, most explorers have to go farther and search harder every year.

3. Gold production has outpaced the increase in the population. In fact, gold production per capita now is even higher than in the 1970s. No crunch evident from this perspective either.

However, gold is not a consumer good – it's not something people need to eat a certain amount of every day, so the physical quantity of gold per person in the world means less than it would for other commodities. Gold, we have long argued, is a "fear barometer" in today's world. It's valued, which means it has demand in inverse proportion to people's confidence in other forms of money. So the fact that supply has kept up with population growth does not imply that supply has – or "should have" – kept up with demand...and we can see that it hasn't in the price of gold. A major part of that is the return of investment demand, almost to levels we saw in 1980, as you can see in the chart below. 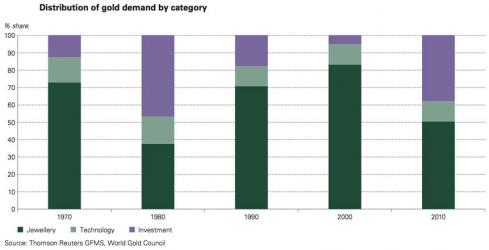 4. Today, as in 1980, mine production and scrap are the major components – almost the only components – of supply. The disappearance of net disinvestment from the supply side of things is one of the more bullish similarities we see between now and 30 years ago. 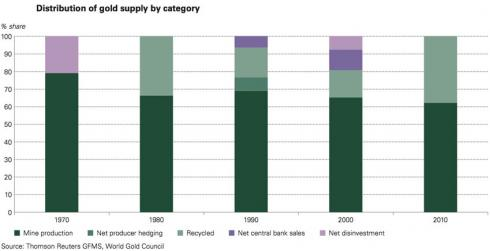 5. One major difference between the gold market today and in decades past is the geography of mine production. South Africa accounted for two-thirds of global gold production in 1970 and 55% in 1980. In 2010, not one country was responsible for more than 14% of world mining supply (with the leader being China, at 13%).

A similar shift has occurred with demand. In the 1980, it was mostly Western countries soaking up the gold trade, probably because that's where most of the wealth that wanted to avoid inflation was. By 2000, when gold was held in the same esteem as certain other four-letter words, North America and Europe had almost left the field. Today, it's become a truly global trade again, as you can see in the chart below. 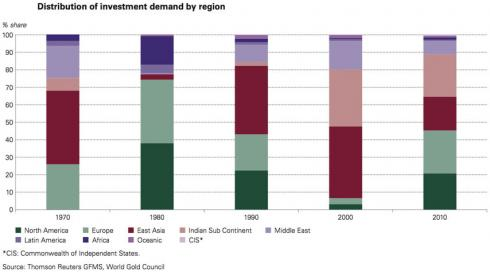 Such decentralization has benefits: It creates flexibility and stability in the gold market. The market psychology is more diverse, making it more liquid and robust.

The supply of gold looks set to tighten. Most companies have been forced to look in riskier jurisdictions and remote locations with poor infrastructure. Environmental and other regulations are multiplying and becoming more costly every year, and even in places where they are not, labor strikes and increases in taxes are taking their toll. Worldwide, mining becomes more complicated and expensive every year...and in some cases, not even worth trying. At the same time, big discoveries remain few and far between – and even when a discovery is made, it often takes up to ten years to reach production.

As they say, the low-hanging fruit has been picked: a supply crunch looks likely in the years ahead.

It's tempting to try to make an argument based on future constraints in gold supply and some of the interesting similarities between past and present conditions in that supply – they seem to point to a gold mania ahead. But it's the demand side that dominates the Gold Price. Whether a shortage of gold supply from production occurs or not, demand for gold is more flexible than supply overall.

Gold is a monetary metal. If confidence in paper money evaporates the way we think it will, the flight to the safe haven of gold could swamp any conceivable glut in supply. We've no crystal ball to tell us when it will start, but we definitely see a mania coming.

And another question arises: Now that gold demand and supply are dispersed across the globe, where will the mania start? US? Europe? How about China, India, or Malaysia? Things could really start cooking with no immediately evident cause in the West at all.

Regardless of when or where the mania starts, our advice is to make sure your personal gold reserves are in place.

Get the safest gold – stored in your choice of US, UK or Swiss vaults – at the lowest price with BullionVault...