END_OF_DOCUMENT_TOKEN_TO_BE_REPLACED

I HAVE said to more than one worried investor that when the Gold Price falls, they should "come back in three months" and see if they're still anxious. The idea is that the daily and monthly gyrations are nothing to fret over, that the price will recover and, in time, fetch new highs, writes Jeff Clark, editor of Big Gold at Casey Research.

That advice has worked every time gold underwent any significant correction (except in late 2008, when one had to take a longer view than three months). Here's proof.

I've traded emails regularly with Brent Johnson ever since meeting him at an investor event I spoke at a couple years ago. He's the managing director of Baker Avenue Asset Management, a wealth management firm with over $700 million in assets. He forwarded some charts he'd prepared for his clients that put gold's September decline into perspective; it's a good visualization of my standing advice to worriers.

The following charts document corrections in the Gold Price of 8% or more – first measured with daily prices, then monthly, quarterly, and finally annually. See if this doesn't put things into perspective. 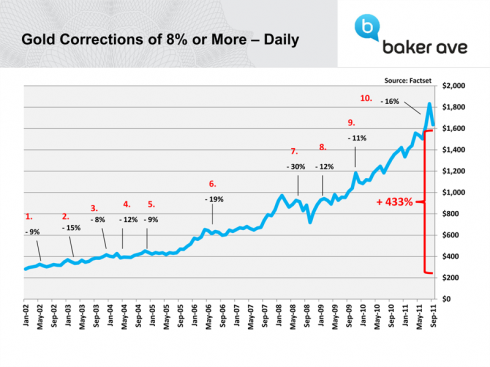 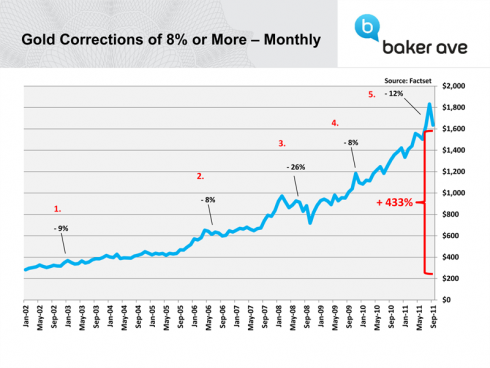 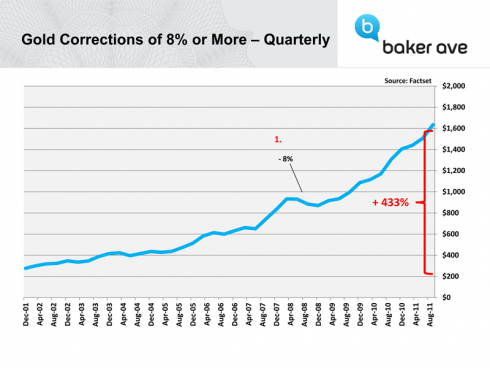 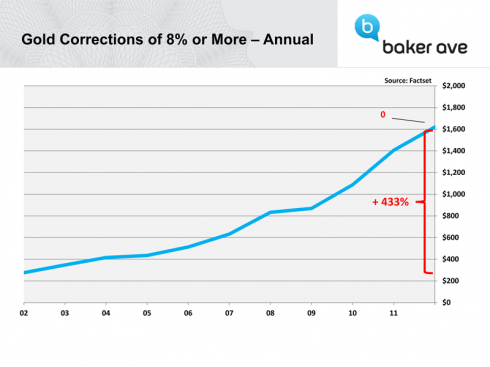 While the Gold Price has had plenty of big corrections since late 2001, they're not so concerning when viewed beyond a day-to-day basis. In fact, if one resists checking the Gold Price except once a quarter, one might wonder what all the fuss with price declines is about.

You'll also notice that the September decline, when measured monthly, was our second biggest in the current bull market (and third when calculated daily). This suggests to me that unless we have another 2008-style meltdown in all markets, the low for this correction is in.

That's not to say the price couldn't fall from current levels, of course, nor that the market couldn't get more volatile. It's simply a reminder that when viewed on any long-term basis, corrections are nothing but one step down before the next two steps up. It tells us to keep the big picture in mind.

It also implies that pullbacks represent buying opportunities. It demonstrates that one could buy any 8% drop with a high degree of confidence. Keep that in mind the next time gold pulls back.

Until the fundamental factors driving gold shift dramatically – something that would require most of them to completely reverse direction – I suggest deleting any worries about price fluctuations from your psyche.

And if you're still a tad uneasy about today's Gold Price, well, let's talk next February.