END_OF_DOCUMENT_TOKEN_TO_BE_REPLACED

After that 5% drop in 1 day, are you ready for some real Gold Price volatility...?

LAST WEEK, on Wednesday 29 February, the Gold Price dropped 4.8% and silver 6.2% on the London Fix, and more again intra-day.

That's quite a fall for one session, writes Jeff Clark of Doug Casey's Casey Research. But we've seen the Gold Price rise by that much in one day, too. And as I'd like to show you, these moves are nothing.

Based on our experience here at Casey Research, we have been warning for some time that volatility in silver and the Gold Price will increase as the markets fight their way to the mania phase of this cycle. Once we get there, these swings will jump higher still. But this forecast doesn't exactly need us to go out on a limb; it makes sense, because since more investors will be crowding in – and out – and  volatility was high in the 1979-1980 mania in gold and silver.

First, let's put last Wednesday's big Gold Price plunge in perspective. Here's a picture of the daily changes in gold over the last nine years, based on London Fix prices.

(This chart is very busy, but I want to show the bulk of the bull market in one visual.) 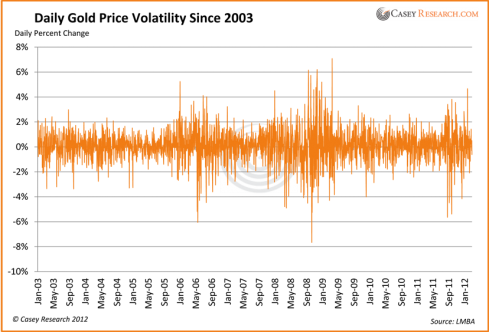 Wednesday's drop of 4.8% is one of gold's bigger one-day moves since 2003. But as the chart shows, there have been several days where gold rose or fell more than that. One-day moves exceeded 6% on five separate occasions. 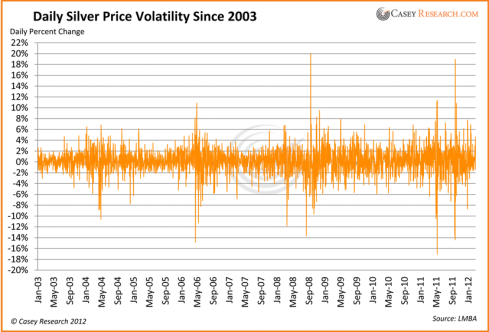 You might rightly think this volatility is high. Worse still, volatility in the underlying commodity is magnified in the related Gold Mining and silver producer stocks. This is why Doug Casey calls mining stocks, especially the juniors, "the most volatile stocks on earth." But the thing is, metals volatility has been higher in the past, particularly during a mania. 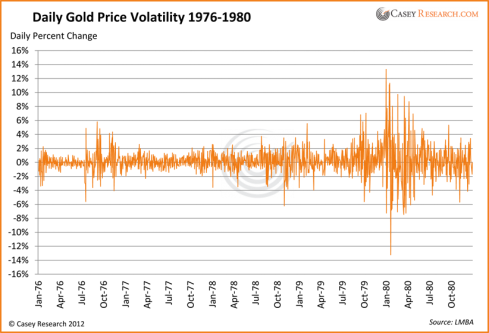 Wild volatility was the norm, not the exception in 1979 and then especially in 1980. Fluctuations of 4% and over weren't uncommon, each and every day.

Here's the same chart for silver. The metal's volatility during the 1979-1980 period became extreme. 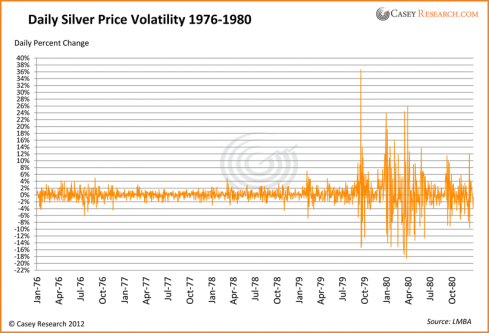 No move in the Silver Price of more than six per cent ever occurred before Jan. 1979. But then they became commonplace. So let's take a closer look at the biggest price fluctuations during this period, studying the largest days of volatility for both silver and the Gold Price. 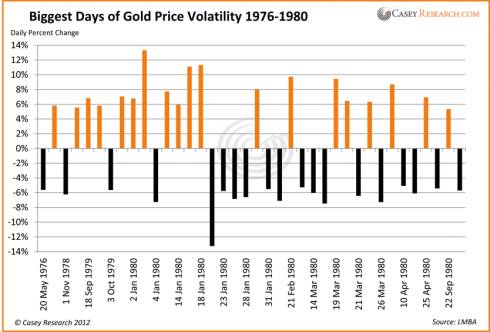 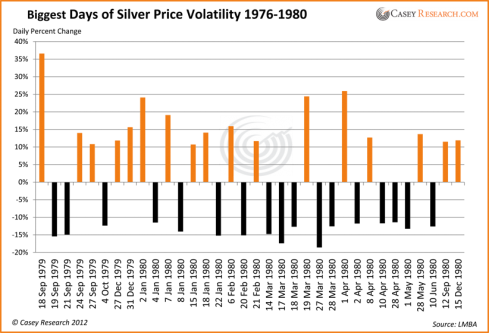 The Silver Price meantime had fluctuations of 10% and over on 34 days. Those 17 up and 17 down-swings all came within a period of 15 months, marking an average of more than two per month.

So to put last Wednesday's price drop in context, we simply haven't seen real volatility in our current bull market just yet. Here are three hard conclusions we should draw from this historical data:

First, should history repeat or even rhyme, the biggest days of volatility in silver and the Gold Price still lie ahead. And they will be normal.

Second, large price fluctuations will be common as we enter the mania stage and approach the peak. In fact, when large daily movements become the norm, the historical record suggests we will be nearing the end of the cycle.

Third, and because current volatility has thus far been lower than during the final phase of the 1970s bull market, we are not in a bubble, nor yet in the mania phase, and nowhere near the top. Remember that the next time you hear some bubble talk on CNBC. And what can an investor do with this information? Prepare yourself for bigger daily swings – in both directions – in both gold and silver. And Buying Gold or silver on these outsized drops is probably a good strategy…if you prepared for what volatility looks and feels like.

How best to Buy Gold or physical silver today...?