END_OF_DOCUMENT_TOKEN_TO_BE_REPLACED

How long might it be before the Gold Price sets a new high...?

THERE ARE some investors who are frustrated and a few who are worried that gold seems stuck in a rut, writes Jeff Clark at Casey Research.

This stall in price has happened before, of course, but since 2001 it's always eventually powered to a new high. Unless one thinks the gold bull market is over, it's natural to wonder how long might we have to wait before seeing another new Gold Price high.

Absent some sort of global shock that sparks another rush into gold (easily possible in today's climate), I think the answer may lie in examining the size and length of past corrections and how long it took gold to reach new highs afterward.

It makes sense that big corrections would take longer to reach new highs than small ones, but I wanted to confirm that assumption with the data. I also wanted to determine if there were any patterns in past recoveries that would give us some clues that we can apply to today.

The following chart details three large corrections since 2001, and calculates how many weeks it took the Gold Price to a) breach the old high, and b) stay above that level. 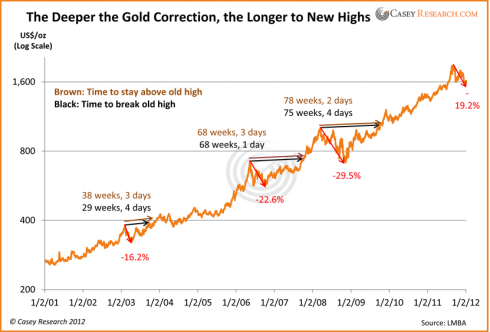 As you can see, it took a significant amount of time for gold to forge new highs after big selloffs. And yes, the bigger the correction, the longer it took.

In 2006, after a total fall of 22.6%, it took a year and four months for gold to surpass its old high. After the 2008 meltdown, it was a year and six months later before gold hit a new record.

Our recent correction more closely resembles the one in 2003. After a 16.2% drop, gold matched the old high seven months later. It took another two months to stay above it.

So when do we reach a new high in the Gold Price?

An exact date is pure conjecture, of course. On one hand, gold could drop below the $1531 low if the need for cash and liquidity forces large investors to resume selling. On the other hand, Europe and/or the US could resume money printing on a large scale and send gold soaring overnight. The point of the data is that it signals we shouldn't be too surprised if we don't hit $1900 for another four months yet. And if it takes another two months or so to stay above it.

Think that's too long? There are some important reasons to not let it discourage you...

Once gold breaches its old high, you'll probably never be able to buy it at current prices again.

That's a rather obvious statement, but let it sink in. Buying now at $1600 and then watching the price fall to, say, $1500, wouldn't be fun – but it'll probably hit $2000 or higher before the year's over, never to visit the $1600s again this cycle. If that turns out to be correct, the next four months will be the very last time you can buy at these levels. You'll have to pay a higher price from then on.

Look at it this way: If the "rebound ratio" is similar to the one in 2003, you have four months and counting to buy whatever gold you want before it's no longer on sale. It's entirely possible that by this time next year you will never again be able to Buy Gold for less than $2000 an ounce – unless maybe it's in "new Dollars" or some other currency that circulates with fewer zeros on the notes.

The data can also help you ignore the noise about gold's bull market being over and other nonsense spewed from mainstream media types. If gold doesn't hit $1900 until May, you'll know this is simply normal price behavior and that they're overlooking basic patterns in the data. And when September rolls around – seasonally the strongest month of the year for gold – and the price is climbing relentlessly and they're caught off guard by it, you'll already be positioned.

Regardless of the date, we're confident that a new high in the Gold Price will come at some point, because many major currencies are unsound and overburdened with debt – and they're all fiat and subject to government tinkering and mismanagement. Indeed, the ultimate high could be frighteningly higher than current levels. As such, we suggest taking advantage of prices that won't be available indefinitely.

After all, you don't want to be left without enough of nature's cure for man's monetary ills.

Buy the safest, investment grade Gold Bullion through BullionVault and benefit from professional vaulting in your choice of New York, London or Zurich, Switzerland...