END_OF_DOCUMENT_TOKEN_TO_BE_REPLACED

Why China has become key to the Gold Price...

THE GROWTH of China's role in the world gold market has been nothing short of phenomenal over the last dozen years, writes Julian Phillips at GoldForecaster.com.

At the same time, China has emerged from a minor global player economically to the second largest economy in the world with its sights set on being the largest. With its breakneck growth of around 10% per annum over this time, the transformation in China has been the envy of the rest of the world. Alongside this growth has been a transformation of Chinese society. From a working class society, we're seeing the burgeoning growth of the Chinese middle class with a commensurate growth in income.

To the gold market, a more important statistic is the spending and saving patterns of China. Like the Indian population, Chinese people are generally thrifty, inclined to save rather than spend disposable income. The Chinese government has always approved of their saving nature, but they have until recently only had bank deposits as a safe place to save. Inflation has robbed many of the benefits of savings and the Stock exchange –not for the ordinary middle class man across China—has been too much of a gamble.

Then the government not only lifted all restraints on the gold market but also actively encouraged gold buying while stimulating the development of a nation-wide gold distribution system through their leading banks. The number of foreign banks now allowed to import gold has jumped. As the system of distribution has reached countrywide, the choice of gold as a savings option has grown.

Over time, the rise of the Gold Price to the extent that they've seen (i.e. - their savings in gold grow much faster than inflation) has confirmed the wisdom of gold as a prudent savings and investment means. Their traditional respect for gold, as money, was established in past generations and continued right through to this day, now with government blessing. Consequently, since the Gold Price took off in 2005, on a per capita basis, per capita investment in gold in China has more than doubled since 2005. Demand for gold as an investment has grown at a 14% annual pace since the Chinese government deregulated the local gold market in 2001.

The rise in Gold Prices and consumption has coincided with a dramatic rise in China's per capita incomes. As you can see from the chart on China's per capita income from 1970 to 2010 the Chinese suddenly have a life. The rise from the $3,000 level in 2000 to roughly $7,000 in 2010 has resulted in the rise of a middle class that is enjoying choices it has never had before. 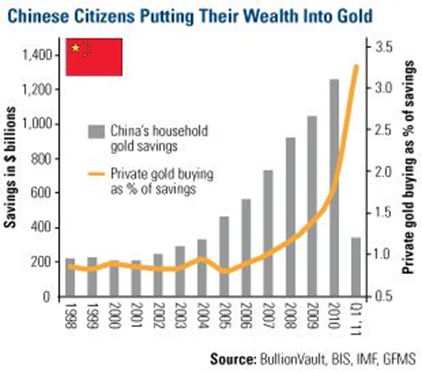 So not only will the Chinese middle classes grow but their disposable income will grow too. As you can see in the chart on the growth of the percentage of their savings entering the gold market, this percentage will keep rising –this tells us that our projections are likely to prove conservative!

A dramatic difference between western investors and Asian ones is the belief in the metal itself and not a derivative that is 'related' to gold. All these savings in Asia are headed into the physical metal. In the developed world, only a small proportion of investment funds find its way into gold bars, coins, and pure gold jewelry. Consequently, the US accounts for only 8% of gold bullion demand whereas Asia accounts for more than 70% of gold coin, bar, and pure gold jewelry demand. What impact will this have on demand for gold?

With a rising percentage of savings going into gold and a middle class capable of growing to twice the developed world's middle classes, potential gold demand per annum bin China has the capacity to grow to over 3,000 tonnes per annum.

The fact that the People's bank of China is buying all local production makes it clear that there will not be enough gold available to accommodate this demand.

Total annual mine production, at below 3,000 tonnes, is insufficient to satisfy such demand and with scrap gold supplies at around 1,650 tonnes –not necessarily the amount available in future years—it is impossible to escape the conclusion that the future for gold is to see prices rise to the extent that is prompts current holders to sell. Add to Chinese demand that of the rest of the world, and we can see that prices have to rise to moderate future demand to the point that demand matches this supply level –for there just aren't any more major easily-mined gold deposits out there to grow supply to this extent.

Please note that these numbers have ignored central bank activity in the gold market. These numbers have also ignored any reformation of the global monetary system, which may include an incorporation of gold to bolster confidence in currencies. (Some countries may feel it necessary to confiscate their citizen's gold for this purpose too.)

From these extrapolations, we can see that China, in time, will become the heart of the gold world. The Chinese government is moving towards China controlling what it deems important. This includes the gold market. Already we're seeing reforms to ensure that the gold market holds its standards high and ranks next to the professionalism of London. With demand at its current levels, gold imports unrestrained and its own gold production now the world's largest national production level, China is inexorably moving to the heart of the gold world. It's therefore expected that China will aim to do what it can to exercise administrative dominance over it.