END_OF_DOCUMENT_TOKEN_TO_BE_REPLACED

The relentless march of inflation against crude oil and Gold Prices...

GOLD IS CONSTANTLY advertised as an inflation hedge, writes Brad Zigler at Hard Assets Investor. So many people think that Buying Gold provides constant insulation from the ravages of rising consumer prices.

Year-by-year through 2008, however, it turns out that crude oil has actually beaten gold at the inflation game, at least when measured against the US Consumer Price Index (CPI).

In a way, this makes perfect sense, since so much of present-day inflation stems from petroleum costs. 2009 may break oil's record, but we'll get to that in a minute. Let's look at the macro picture first – or rather, the macro pictures.

For our analysis, we'll use average yearly prices over the past four decades, so we'll be sure to encompass both the pre- and post-Nixon markets. It was on Richard Nixon's watch, remember, that the Bretton Woods scheme was scuttled, decoupling the US Dollar from Gold Bullion. The following decade was, to say the least, inflationary. 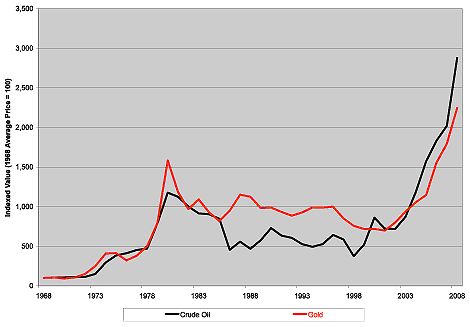 Through 2008, as this chart using data from IOGA and the LBMA shows, oil's price trajectory looks fairly similar to gold's. Crude peaked at an average price of $91 a barrel last year.

Apparently, oil, which had played the weak sister to gold in the early days of the new millennium, has now outpaced the yellow metal.

What's more, these price charts don't reflect the impact of inflation on gold and oil prices. Factor that into the mix (courtesy of the BLS consumer-price data) and you'll discover that neither gold nor oil has really smoked their old highs. Inflating the commodities' historic prices to 2009 dollars tells us that gold needs to average $1,607 this year to match its 1980 performance. That's an 84% jump – a pretty tall order to be sure.

For oil, the bar was set a lot lower this year. To match its 1980 performance, oil would only need to average $98 a barrel, just 8% above its average 2008 price. Whether or not that will come to pass is another matter. 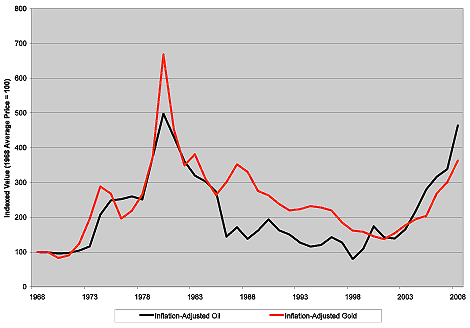 Keep in mind that these charts depict the compound performance of these two commodities since 1968. If you look at their performance on a year-by-year basis, things look a bit different.

What's more, the CPI adjustment factor used in these charts rarely backtracks. Inflation is the norm, deflation the exception. The average annual inflation rate since 1968 has been 3.6%, and there's nary a negative year to be seen. (So far, at least...) The median annual outperformance of gold to CPI is 1%. Oil does a bit better, albeit by a slim margin. Oil's annual gains were 1.7% better than CPI's. But before you rush out to buy crude oil ETFs or ETNs, take note of this:

Oil's taken a beating in 2009. The average price of crude now is about half of what it was last year. Gold, however, hasn't given up ground; in fact, it's on pace to show a gain for the year in terms of paper dollars.

Whether things will turn around by year's end is an open question. But that brings us full circle to the Gold / Oil Ratio. Because when it comes time to hedge inflation, the ratio provides some clues as to the better hedge. Gold is ascendant when the ratio turns up from a bottom; oil has the advantage when the ratio turns down from a top.

Looking for an easy, cost-effective way to own physical Gold Bullion outright...? Read on if you're Ready to Buy  Gold...