END_OF_DOCUMENT_TOKEN_TO_BE_REPLACED

Gold Mining stocks just matched the price rise in gold itself during the April-June quarter...

ONE OF THE MARKET'S big hints that Gold Mining stocks might be ready for take-off is when they stop following the broader markets and strictly track gold, writes Jeff Clark, senior editor of Casey's Gold & Resource Report.

Particularly if the broader stock-market falls and Gold Mining stocks don't. We now have data showing this has just occurred.

From April 2009 to April 2010, gold stocks mirrored the S&P. The two markets held hands as often as high school sweethearts; there was very little separation between them. While it wasn't always a daily connection, any weekly and especially monthly chart showed them moving in tandem. 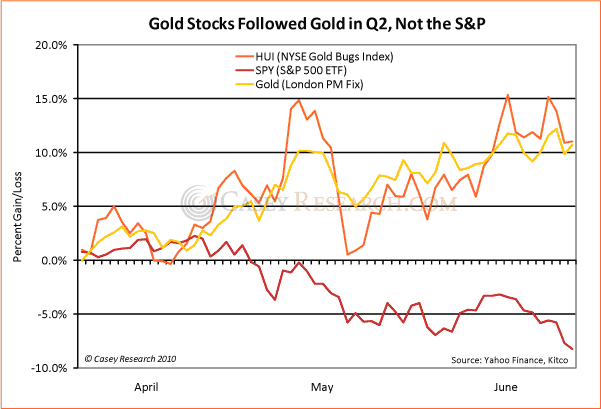 We haven't seen this level of separation between gold stocks and the general stock market since the first quarter of 2009. This demonstrates obvious strength in our sector, and is precisely the kind of action that can signal we're getting closer to our precious metals investments starting a major leg up.

In the big picture, this data should be considered a short-term indicator. However, it's a refreshing reminder that at some point, it won't matter what the broader markets are doing. In the precious metals bull market of the 1970s, the Barron's Gold Mining Index soared 652%, while the S&P gained only 22% for the entire decade. This means that if you're bearish on the economy, you don't have to be bearish on gold stocks.

Whether this is the beginning of permanent separation or not, the following chart tells us the stock market, in relation to gold, is going one direction. 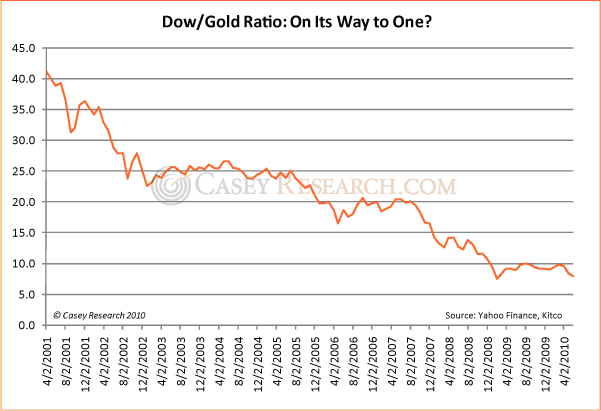 When gold peaked in January 1980, the Dow/Gold ratio reached "one," meaning they were both selling for about the same price. To hit that same ratio today, gold will have to go higher and the Dow simultaneously lower. The fundamental reasons gold will rise are far from over, and a second leg down in the broader markets seems almost locked in at this point.

In this context, Doug Casey's call for a $5,000 Gold Price doesn't seem so farfetched. It also coincides with his call for a Greater Depression, an environment not exactly suited for higher stock prices. $5,000 gold = 5,000 Dow.

Where do you think they'll meet – three? Eight?

This has obvious implications for your investments. If you're investing for the big picture, you first want to think twice about any conventional stock investment. You might even consider a short position on one of the indices, something without a time limit, such as an inverse ETF.

Second, you should plan on higher Gold Prices. While pullbacks are inevitable, it does mean that even if you don't own gold yet, it's not too late. In fact, any excuse you have now for not buying gold will seem shallow and meaningless when the Dollar begins cratering and so does your standard of living.

Third, don't shy away from Gold Mining stocks. Yes, they're still stocks and thus vulnerable, and we're not sure the separation is here to stay, but selling your core holdings would be, in my opinion, a mistake. One of these days gold stocks won't wait around for you to jump back in. And you could find yourself chasing them, a tactical error for the investor looking to maximize profit from what we believe will be a once-in-a-generation bull market.

In fact, if you had followed only this strategy since the precious metals bull market began in April 2001, you'd be up 375% in your gold holdings and up 707% in your gold stocks. An investment in the S&P, meanwhile, would've returned you exactly zero.

It's our opinion this trend will continue. Gold Mining stocks could very well get cheaper in the short term, handing risk-friendly investors an excellent buying opportunity. But in the big picture, they're destined for much higher levels, we believe.

My advice? Make sure you're on the right side of this trend.

Buy Gold at the lowest costs possible, and storing it in the very safest way for just $4 per month by using BullionVault...