END_OF_DOCUMENT_TOKEN_TO_BE_REPLACED

Sooner or later, Gold Mining investors will realize the US doesn't cut it...

If you asked them to name a gold miner, chances are it would be a domestic producer, one with assets located primarily in North America. But that's not where the big money will be made over the next decade.

To start, here's something that will make you better informed than the typical traditional broker: take a look at where gold is currently being dug up around the world. 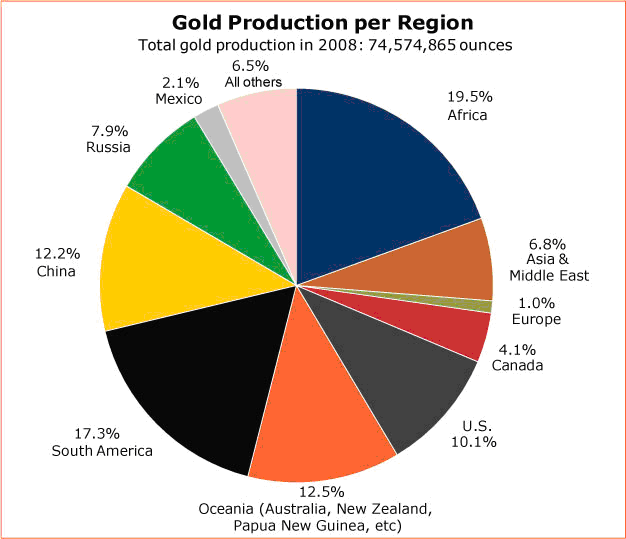 Tally it up, and North America accounts for only 16.3% of total global gold production.

In other words, 83.7% of all the new gold every year comes from outside our continent.

Furthermore, of the 15 largest gold deposits in the world, only five are in the US, Canada, or Mexico. Meaning, two-thirds are in regions where you don't get cell phone coverage and the natives don't speak your language.

The picture gets even sharper when you see the regions where production is increasing, vs. areas where it's declining. 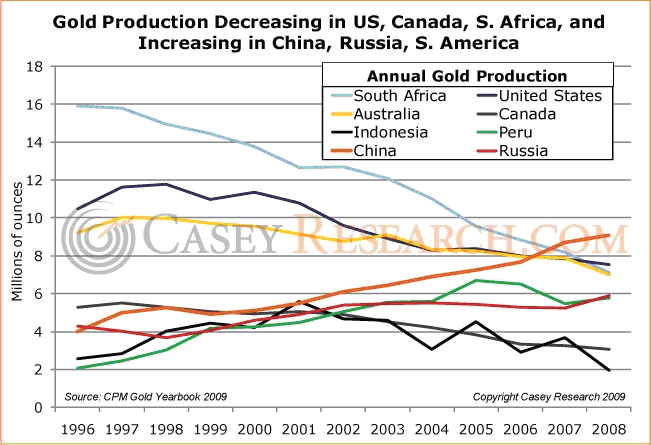 Several countries where gold has been traditionally mined, such as South Africa, Australia, and the US, are suffering production declines, while other areas, like China and South America, are just now starting to rev up.

In other words, not only is more gold being dug up outside our borders, more is being found there, too.

This has obvious implications for the Gold Mining stock investor who recognizes that the momentum is clearly behind the emerging countries. One geologist told me that some of these prospects are like Nevada was 100 years ago; wide open and full of gold deposits just waiting to be discovered.

Yes, there is risk, but the political winds are shifting in a more pro-mining direction here as well. In the US, for example, some members of Congress continue to promote a bill that could dramatically harm mining in the states, while China and many parts of South America are opening their doors to foreign companies. What would you rather invest in – a country trying to woo your investment Dollars or one that is scheming to find new ways to take more of them away from you?

Gaia the Earth Goddess didn't ask where we wanted our gold and silver deposited. And it is the underexplored – and in some cases the unexplored – regions that offer the most potential for new discoveries, greater production, and thus, higher investment returns.

We currently recommend our subscribers keep one-third of their assets in cash, one-third in physical gold, and one-third in other investments, including top-notch Gold Mining stocks and proxies. To find out more about the most trustworthy precious metals dealers...and how to store gold safely at low cost...see Casey Research's special report here.

Why make gold complex and costly? As analysts from Florida to Canada, Singapore to Germany have now found, BullionVault is the simplest, lowest cost route to Physical Gold ownership now available to private individuals worldwide...