END_OF_DOCUMENT_TOKEN_TO_BE_REPLACED

The theory of gold-market manipulation put to the test...

WRITING ARTICLES on gold and precious metals can be an unending job, says Brad Zigler at Hard Assets Investor.

The time spent researching and composing the piece often seems short compared with the investment required to field questions and defend one's reasoning.

Gold, for example, seems to excite everyone's passions. Everybody's got an opinion about why the metal's where it is today or why it ought to be higher, or lower, in the future. And why not? After all, if it weren't for differences in opinions, there'd be no trading.

But let's be clear: An opinion is just a personal view; it's not a fact. When it comes to the responses to gold articles published by Hard Assets Investor there seems to be plenty more opinions than facts offered.

One of the most common beliefs held by responders is that the Gold Price is being artificially suppressed. Gold, according to subscribers of the manipulation theory, would be higher-priced today if not for the efforts of a banking cabal that cuts short rallies.

But what are the facts, if any, that support this contention? Articles written by Ted Butler are most often cited as the backup for the manipulation argument. Butler, a newsletter publisher and one-time commodity broker, posits a criminal conspiracy among large commercial interests in the silver – and by extension, in the gold – market.

The smoking gun Butler offers is the short interest held by a handful of banks. And according to data compiled by the Commodity Futures Trading Commission (CFTC), banks are indeed on the short side of the metals futures markets and have been for quite some time.

At present  (CFTC data for May 5, 2009), the COMEX Gold Futures market traded through New York looks like this:

So, bank-held long positions, in the aggregate, amount to a quarter of the size of the financial institutions' short sales. That's supposed to be the smoking gun.

Butler attributes the 2008 gold sell-off to some sort of manipulative action by these banks. In one newsletter, he writes: "Every criminal act must have a motive and an opportunity to commit the crime. By the simple process of elimination, those responsible for this crime are the concentrated commercial shorts on the COMEX. No one else fits the profile. They had the means (through their dominant and monopolistic position), the profit motive and the skill to cause the sell-off."

Okay. Time for a lesson in capitalism. Banks are in the business of making money. There's no crime in that. And while banks strive to earn a yield spread between borrowed and lent funds, they also have proprietary trading desks in which they deal as principals in debt securities, foreign exchange and, to one degree or another (more so for non-US institutions), precious metals.

Banks also execute trades as agents for their large customers. But the existence of a large bank position, short or long, does not in itself indicate manipulation. Indeed, if you looked at bank participation in other commodity contracts, you'd see many instances of lopsided positions.

Take US Treasury bond futures as an example. Bank short positions in T-bonds are heavier and more concentrated than those in gold.

Using Butler's reasoning, the Treasury market must be even more highly manipulated than gold; fewer banks with positions twice as short as those involved in metals.

But where's the trail of guilty footsteps here?

More interesting still is the common, yet one-sided notion of manipulation. As gold's cash and futures prices soared between October 2007 and March 2008, for instance, large speculators' net long positions grew atypically outsized. Simply put, institutional accounts and hedge funds (the red line graphed below) jumped ahead of commercial hedgers (blue line) to lead the market to its peak above $1,000 an ounce.

Yet we heard no outcry from Butler or his followers about manipulation then. Clearly, long speculators had means and motive. If we adopt Butler's presumptions, the run-up should also amount to prima facie evidence of criminal conspiracy to drive Gold Prices higher. 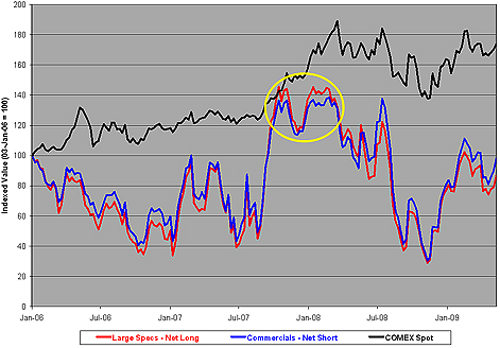 Butler believes the subsequent sell-off was so severe that it must have been orchestrated. Forgive me for thinking that the standard of proof for conspiracy hasn't been met. Once again, where's the evidence?

A suspicion of funny business in the metals markets would be bolstered if Gold Futures had sold off in isolation. But they didn't. Gold, silver, the Euro, crude oil, corn, the Dow...everything swooned in the spring and summer of 2008. There was wholesale de-leveraging in the wake of the unwinding of short Dollar plays.

So, how's that fit in with the Butler conspiracy theory?

Now, I'm a reasonable guy. I'm more than willing to look at the gold market with fresh eyes if readers can supply new facts rather than supposition and hearsay. If you've got something to say about gold's manipulation, now's the time.