END_OF_DOCUMENT_TOKEN_TO_BE_REPLACED

Knowing when this bull market in Gold Investing ends is critical...

WE RECENTLY received the following comment in our Q&A Knowledge Base, writes David Galland of Casey Research.

"Investors should be prepared to sell gold as either increased inflation expectations or doubts around debt sustainability force a sharp increase in US Treasury bond yields. Simply put, in an environment of high real interest rates, the allure of Gold Investing could disappear as quickly as it did in the early 1980s when Paul Volcker took control of the Federal Reserve..."

First off, I want to congratulate the reader for trying to anticipate the conditions that might mark the end of the gold bull market. Because, make no mistake, the Gold Investing bull market will come to an end – and when it does, it's not going to be pretty for those who stubbornly stay too long at the party.

As to the possible triggers for gold's big sell-off, the reader's contention is directionally correct when he points out that this could occur when real interest rates (T-bill rates minus CPI) become high enough. At that point, as a non-yielding asset, gold will become less attractive to investors looking for income. And, gold will fall.

However, the situation today is significantly different than during Volcker's term as the head of the Fed.

The first difference can be seen in the chart here that I just dredged out of the archives of The Casey Report. Besides painting a picture that many of you will think obvious – that inflation is the biggest driver of interest rates – you can also see that gold's stunning rise in the second half of the 1970s occurred during a period of strongly rising interest rates. So, rising interest rates and rising Gold Prices are not mutually exclusive. 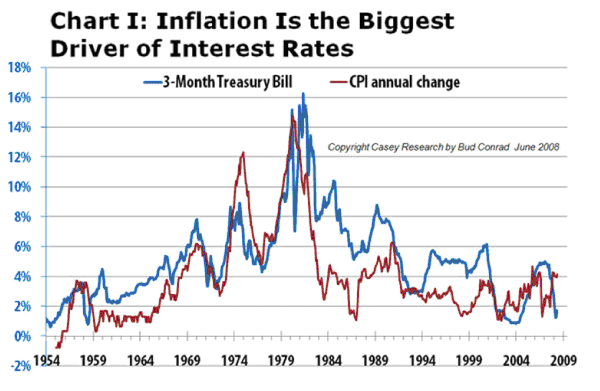 The second difference between now and then becomes clear in the next chart showing that while there certainly was an inflation problem during Volcker's reign, there definitely was not a debt problem.

At least, there wasn't a problem compared to today... 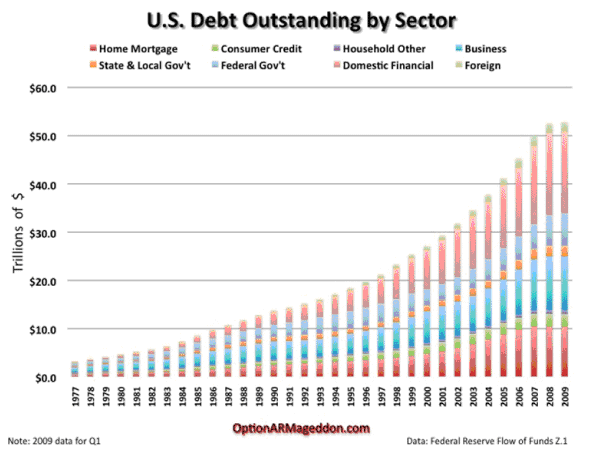 The implications of the nation's current debt load loom large in this discussion. Aggressively raising interest rates, as Volcker did back in the day, would not just dent today's US economy, it would destroy it. As it would evaporate a significant amount of the trillions of Dollars now sitting in government debt, much of it held by pensioners.

Put another way, Volcker raised interest rates as energetically as he did because he could. Today, that couldn't happen – at least not without pushing the US economy into a death spiral. That's why we've long compared the scenario faced by today's policy makers to being stuck between "a rock and a hard place."

While the smoking ruin solution I wrote about a few weeks ago – where the government steps aside and lets the free market do its worst, so that it can then do its best – is certainly possible, the more likely scenario is that the Treasury and the Fed will keep reacting to each new chapter in the crisis by further degrading the currency in the hopes that at some point the debt becomes manageable. Of course, there is the real risk that at some point along the path, our creditors will lose faith and demand higher interest rates.

But what happens if interest rates begin to move up based on credit concerns, and not in response to a noticeable uptick in price inflation? At that point, couldn't we see positive real interest rates relative to CPI – therefore reducing the appeal of Gold Investing?

If interest rates begin to rise for any reason – including concerns over creditworthiness – the obvious damage to the economy and to the government's ability to service its debts will only heighten concerns over repayment. Almost overnight, creditors will begin to fear either overt debt defaults or the covert default of yet more inflation, and demand even higher rates.

At that point, with interest rates beginning to spiral, few people will be looking to buy bonds but will remain fixated on the return of capital, versus return on capital.
Being repetitious, debt is the single biggest economic challenge facing the US – and much of the developed world. In time this debt will get resolved, it always does, but it's not going to be pretty.

As I see it, unlike the inflation of the 1970s that could be treated with a strong dose of tight monetary policy, the debtflation we now face can only be resolved through default. Given that no US government will want to join the ranks of history's sovereign deadbeats, the inflation option remains the most likely course.

And in that scenario, gold is still a solid investment and so should be a core portfolio holding.