END_OF_DOCUMENT_TOKEN_TO_BE_REPLACED

A dollop of nonsense about Gold Investing, courtesy of Money magazine...

Money magazine's Jan/Feb edition ran an article near the rear of the issue entitled "Coming Down with Gold Fever". The author paints a decidedly negative picture of gold, going so far as to compare gold's rise to some of history's greatest asset bubbles, such as tulips in 1630s' Holland, and internet stocks in late-90s' America.

That this attack on Gold Investing comes from a finance magazine commanding front-of-the-rack prominence in waiting rooms across our great land is reassuring evidence we still have a long way to go in this gold bull market. And the article is so blatantly biased and inaccurate that I decided to have a little fun with my rebuttal.

Regular Casey Research readers know I affectionately refer to self-declared Gold Investing debunkers as "Bert". You judge if this latest nay-sayer is worthy. What follows are the article's claims, along with my advice on how to respond...otherwise known as How to Talk to a Nincompoop (HTTTAN)...

HTTTAN: You're absolutely right! A few cable TV commercials clearly signal the world has latched on to gold and is dizzy with excitement. The bestsellers at my local bookshop all scream with titles about gold. The radio waves are sparking with talk about buying, storing, testing, and securing all the different options with gold. And all those live newscasts from the lines outside gold shops across the country are really getting old.

If gold were in a mania, it would resemble the dotcom craze of 2000, where companies with no profits traded at 400 times earnings; when investors were leaving their brokers to chase the latest tech stock; and where everybody and their brother's dog was talking about the hot technology stock they just doubled their money on. None of that is happening now.

Besides, there's a good reason investors have been Buying Gold: it outperformed most other investments last year. 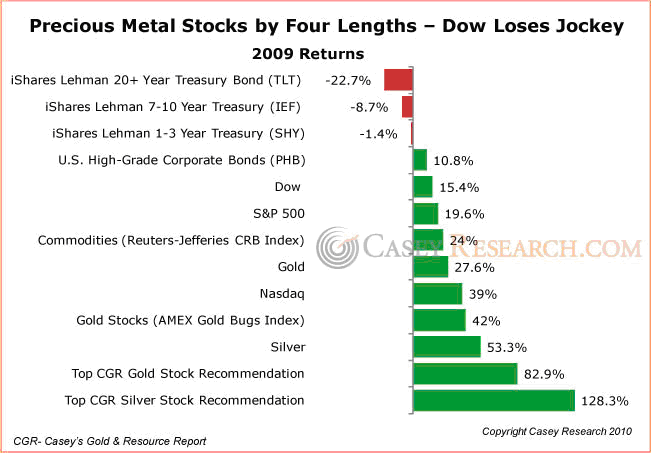 Gold Mining stocks tripled the performance of the Dow, more than doubled that of the S&P, and outran the Nasdaq.

#2. "The price of gold is the only thing rising...Gas costs less than it did a year ago."

HTTTAN: Well, my blood pressure rose when I read your article – does that count? And whew, I'm glad I misread my DirecTV bill announcing higher monthly charges. Higher fees from my bank? Must've had my glasses off while checking my last statement.

But either way, are you suggesting we wait till there's rampant inflation before we Buy Gold?

To start, the national average gasoline price rose from $1.70 to $2.70 a gallon over the past year, a 58% increase. The data disproving Money magazine's blatantly inaccurate and misleading claim is available free on the internet. And if you want to talk about things rising, how about the US monetary base...which more than doubled over the past 18 months to nearly $2 trillion, the steepest increase ever?

And you're right: Gold Bullion is the only thing that's been rising over the past decade! Ergo, that's been the place to be for a meaningful part of your investing. 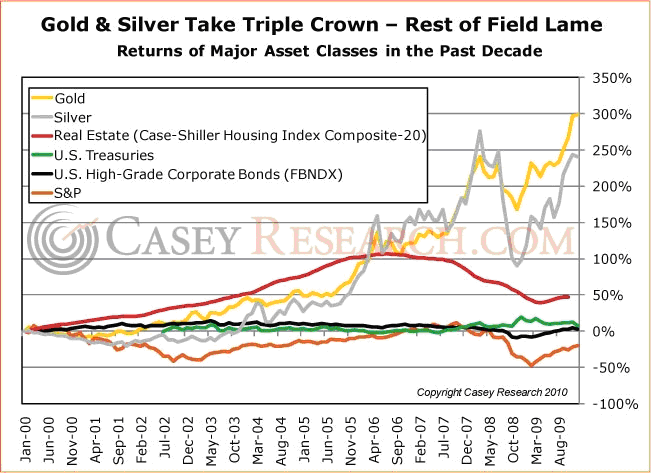 Gold is doing what it's supposed to do: rise in times of crisis.

#3. "Gold isn't that inexpensive. And who says it's guaranteed to return to old highs?"

HTTTAN: Who says?! How about the laws of economics? My teenage son even understands this: the more you print of something, the less each one is worth. And as the Dollar continues deteriorating, gold will continue rising. And gee, Wally, they can't print gold.

Adjusted for inflation, gold's peak at $850 an ounce in 1980 would equal about $2300 today, more than double its current price. Guaranteed? Of course not. Where would I find a guaranteed investment? But I'll put the 5,000-year history of gold ahead of anything that is touted as "guaranteed" in the popular press...

#4. "Even China is wary of Gold Prices rising too much."

HTTTAN: Huh? The People's Bank of China merely said they may not buy much gold right now, referring to their desire to get a better price, not a change of heart. In fact, there are so many articles about how the Chinese continue Gold Investing it's hard to catalog them all.

And this just in: An ING survey reports that 45% of investors in Asian markets (excluding Japan) picked gold as their most favored tool to protect their returns from inflation, more than any other asset.

#5. "Only a small number of sophisticated investors are getting in on the action."

HTTTAN: You mean like some of the most successful hedge fund managers in the world? Wait – are you suggesting we follow your advice instead? I'll consider that when you show me that article warning of a market top in '07 and urging your readers to get out. Instead, I seem to recall your magazine's giddiness as the market peaked. Perhaps that explains why many "sophisticated" investors use your magazine as a contrary indicator.

Investment management firm Moonraker reported in a 2009 survey that 20 out of 22 fund managers interviewed chose physical Gold Investing for their personal portfolios because they fear quantitative easing programs may lead to inflation. In other words, not only are they Buying Gold in their funds, they're stashing real, physical metal securely, too.

Furthermore, central banks are now net buyers of gold for the first time in 22 years. And last quarter it was reported by the Financial Times that the world's wealthiest families are also switching to gold, reporting that two-thirds of the 100 respondents to a survey by the Family Office Channel, a new website, say they are now more likely to invest in gold and other commodities.

#6. "Since 1974, when restrictions on Americans' owning gold were lifted, stocks have actually done a better job beating inflation than gold has."

HTTTAN: You're kidding, right? You actually know someone who has held a stock since 1974? I suppose we could contact Warren Buffett and get a couple names. Otherwise, get real: there's a time for everything, and right now is clearly the time for precious metals.

Doug Casey made a fortune investing in gold stocks in the mid-'90s during a mini bull market in gold. Generational wealth was created during the late '70s gold run. I have colleagues that have already retired from gains they made in gold stocks this past decade.

#7. "Ask yourself how long this delirium can last."

HTTTAN: Until people like you start telling readers to Buy Gold, that's how long. And, delirium? Tsk-tsk, your envy is getting embarrassing.

There has been little involvement by the general public in the current gold bull market. While there are many examples of this, perhaps the best one is that your magazine doesn't recommend buying it and really never has. And when you finally do, that will be my signal to start selling. I might as well thank you now.

There's actually more, but you get the idea. When I finished the article, I couldn't help but wonder what Bert is really trying to sell us here. He's clearly either biased, blind, or bought.

Because otherwise, he truly does meet the definition of my Grandma's favorite word – nincompoop.