END_OF_DOCUMENT_TOKEN_TO_BE_REPLACED

Mortgages guaranteed by Fannie Mae and Freddie Mac are selling at just 70 cents on the dollar...

IN TWO SHORT WEEKS, HSBC, Citibank, Goldman Sachs, Swiss Re, and several Japanese banks have revealed tens of billions of losses stemming from US mortgages.

As I wrote in my last article, Subprime Mortgages Lead to Subprime Currency:

"At this juncture, the Fed has no choice but to redeem any and all mortgages at near face value directly, through government-sponsored enterprises [GSEs] or offshore vehicles. The more the Fed redeems, the more dollars they print. When you print $1 trillion (10%) a year, people can reasonably swallow the extra money supply, but when you print a $1trillion in a hurry and in a conspicuous way, you are directly challenging money managers' intelligence and you will see a squeeze in gold. It's that simple."

CNNF kindly explains how GSE's work – as well as their impending failure:

"Fannie Mae guarantees mortgages, which have been packaged and sold to investors as bonds. If a homeowner falls significantly behind on his payments, Fannie Mae has to buy back the loan from the bondholder. If the mortgage has an outstanding amount of, say, $100,000 and unpaid interest of $5,000, Fannie Mae would have to pay $105,000 – its full value – to make the bondholders whole. However, the $105,000 loan may actually be worth less on the market.

"Fannie Mae's decision to exclude SOP 03-3 losses coincide with their shocking rise: In the third-quarter ended Sept. 30, 2007, the company's SOP 03-3 losses came to $670 million, up from $37 million in the same period a year ago. It's not clear why SOP 03-3 losses are skyrocketing, but it suggests that Fannie Mae is having credit problems and is having to buy a lot more bad loans back from bondholders."

The reason for the dramatic SOP 03-3 rise is very clear according to the ABX index below. 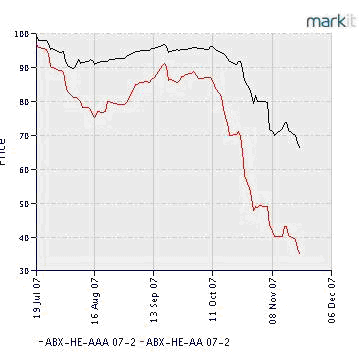 The index shows, collectively, that mortgages guaranteed by the GSE's – meaning Fannie Mae and Freddie Mac – are selling at just 70 cents cents on the dollar. Freddie's $120 billion and Fannie's $42 billion of exposure to GSE-qualified mortgages means a write-down of over $30 billion and $10 billion respectively.

Given that both outfits have about $1 billion in excess capital, they are now technically insolvent, especially when the ABX index is showing no signs of reversing. Freddie has hired Goldman Sachs and Lehman Brothers as advisors to help it raise capital in the very near term, but our take is that no sane institution will lend money to Freddie.

If left to their own devises by the government, Fannie and Freddie are doomed. 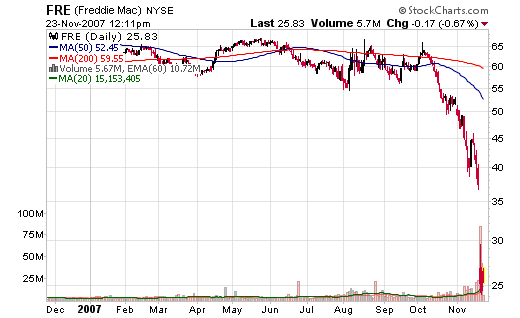 In our most recent article, I also said:

"No sane foreign institution is going to finance American home owners, and why should they when they can finance the Brazilians, Canadians, Thais, Russians, Chinese, Indians, with an appreciating currency? The Dollar reserve status is now shattered. Mind you, it's not that we are against the Dollar in particular, we just don't think any fiat currency deserves to be the world's reserve currency.

"To those who say Gold Prices are due for a prolonged correction at $800, they are missing the big picture. To us gold's run has just gotten started, the Emperor is now naked for all to see."

This $30 trillion love affair has ended and the aftermath is not pretty. To understand why the Fed has to print and bail out all those banks and funds, we highly recommend that you watch this British comedy skit from John Bird and John Fortune...

As the banker says: "One thing I learned is if you are going to cock up something, better cock up big so government has to bail you out, and if the government does not give me my money back, I will tell them, it's not my money, its your pension fund money."

Meantime, the Gold Market has just successfully tested the 50 day-moving-average support. Our 2007 target of $850 for gold may be too conservative, as once the $850 level is overcome, gold could rapidly challenge the $1,000 level. 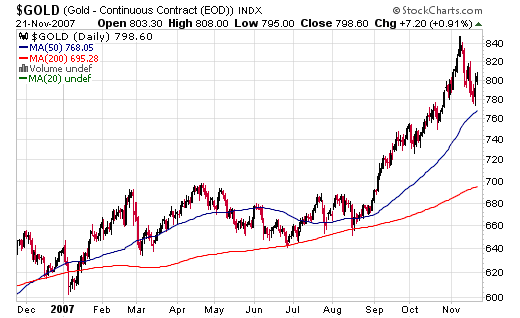 Welcome to inflation and welcome to gold.