END_OF_DOCUMENT_TOKEN_TO_BE_REPLACED

US housing has a way to go yet before reaching historical lows against gold...

NO, I DON'T have a crystal ball, but I'll bet I can tell you how much a house will cost in five years, writes Jeff Clark for Casey's Gold & Resource Report.

Swiss bank UBS released some interesting research last month on how much gold it takes to buy the average-priced home in the US.

I put the data to a chart, and it's quite revealing... 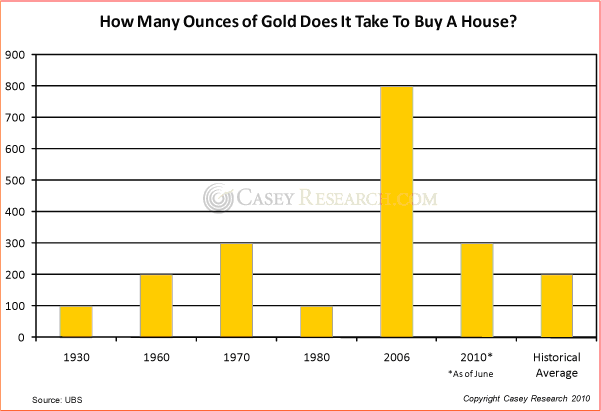 What's interesting is that as much as house prices have fallen and as much as the Gold Price has risen, today's ratio is still above the historical average.

You can see we're at the same number today as 1970, and yet look where it was 10 years later when gold peaked.

Here's another interesting observation: the ratio was 100 during both high inflation (1980) and strong deflation (1930). The connection between house prices and Gold Prices during economic extremes seems awfully compelling.

So, if gold peaks and real estate bottoms in about five years, then a house will cost you about 100 ounces of gold in 2015. Maybe it will take ten years, but the point is, I think we can count on the ratio moving lower this decade, and probably significantly so. Even for the modest budget, 100 ounces almost sounds manageable.

Think gold's too volatile to use as a savings vehicle? Better reconsider that assumption, because we're convinced a third dynamic will be at work: a falling Dollar. Ergo, you can sock away lots of cash for your offspring, but if it's denominated in Dollars, it won't buy them as much as gold will. Think about it: if gold doubles, that means your Dollars will have lost a significant amount of purchasing power.

The fine print here, of course, is that you sell when the Gold Price is high, and that you pay the tax on the sale. But I would counter that argument by saying that gold is probably not stopping when it doubles from today's levels.

If we're right about the direction of real estate – down – and Doug Casey is correct in his projection for the Gold Price, then I think I've got a solid plan to buy my kids a house.