END_OF_DOCUMENT_TOKEN_TO_BE_REPLACED

UK government gilts have been reduced to rubble in terms of Gold...

STRATEGISTS at Deutsche Bank are stirring up the animal spirits by warning that the escalating cost of insuring against debt defaults by Greece might be a "dress rehearsal" for a similar attack on the British gilt market, writes Gary Dorsch, editor of Global Money Trends.

The UK is running a budget deficit worth 13% of GDP this year, exceeding that of Greece. Proportionately, the UK's budget deficit is the largest ever outside wartime. Britain sold a record £225 billion worth of gilts last year, but that was almost entirely monetized by the Bank of England via its asset purchase scheme to pump money into the economy. 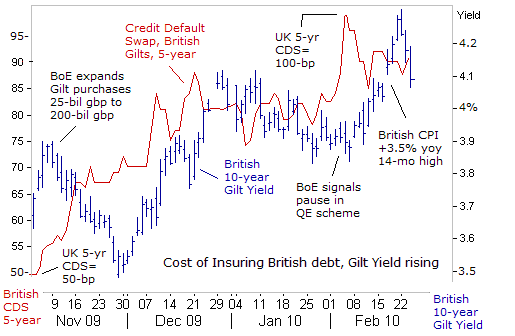 With the Bank of England's "Quantitative Easing" now on hold and more than £200 billion worth of gilts to be auctioned this year, the British government bond market could be a ticking time bomb, ready to explode at the slightest hint of a serious outbreak of inflation.

Nerves were briefly rattled when official data reported on Feb 16th showed consumer price inflation rose to 3.5% in January from December's 2.9%, forcing Bank of England chief Mervyn King to write a public letter of apology for the insidious side-effects of overdosing on the hallucinogenic, queasing drug. 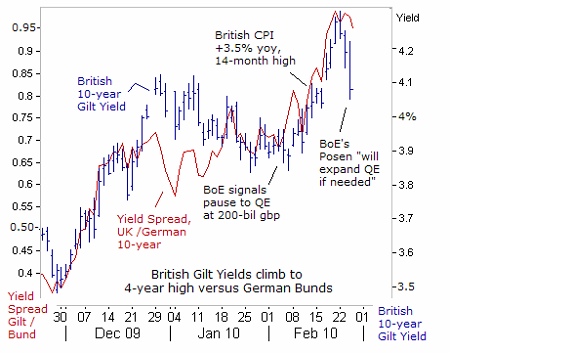 Another sign of underlying weakness in the British gilt market is the widening yield spread between British 10-year gilts and the equivalent German Bunds, climbing as high as 100-basis points, the highest in four years, after the Bank of England signaled a pause in its gilt-buying spree.

Whereas the Bank of England has openly monetized 90% of the gilts sold last year, the European Central Bank (ECB) has been monetizing debt clandestinely, through a strategy of lending vast quantities of Euros at 1% to European banks, who in turn then buy up the sovereign debt of Eurozone nations.

It is estimated that European governments will need to borrow €2.2 trillion (19% of GDP) from the capital market in 2010 in order to finance large deficits and roll-over existing debt, the largest borrowing binge in decades. Gross borrowing (including maturing and new debt) is projected to be largest in France (€454bn), Italy (€393bn) and Germany (€386bn).

One key question is whether the ECB should decide to scale down its lending facilities to Eurozone banks, which would greatly impact the "liquidity premium" enjoyed by German Bunds. There could be a severe credit crunch before July 1st, when banks are required repay €442 billion in 12-month funds to the ECB – more than half the liquidity outstanding.

That could force the sale of Eurozone bonds and stocks if no rollover option becomes available. Shortening the terms of future loans could also trigger sales of longer-term bonds, only worsening the situation for Greece.

Back in London on Feb 24th, alarm bells began to ring after British gilt yields reached 4.25%, putting the UK's fledgling recovery at risk. The Bank of England's Adam Posen quickly rode to the rescue, warning that the central bank would rev-up the printing presses and expand its Quantitative Easing operations if necessary, in order to prevent gilt yields from rising further.

"If we have to, we will. Any of you betting on high inflation in major economies, including the UK, will lose money," Posen warned.

In a knee-jerk reaction, speculators rushed to cover short positions in the gilt market, knocking 10-year yields to as low as 4.07%. 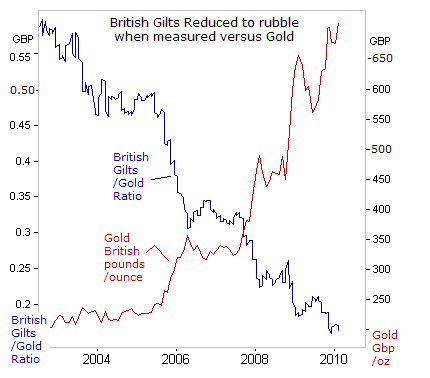 However, looking beyond Posen's propaganda, traders betting on the demise of the British gilts market have profited handsomely, especially by utilizing gold as a hedge against the Bank of England's money printing operations.

Over the past 6 years, British gilts have lost more than two-thirds of their purchasing power when stacked up against the yellow metal. Until the Bank of England begins to drain the liquidity swamp in London, gilts are in danger of sinking further when measured in gold.

Want to buy and hold real Physical Gold Bullion – with no risk of default or leveraged losses – and hold it securely in ultra-safe vaults for just 0.12% per year? "If there's an easier route to buying investment gold, I have not found it," says one BullionVault customer. Find out for yourself and start your Gold Investment with a free gram today...