END_OF_DOCUMENT_TOKEN_TO_BE_REPLACED

What first ailed the Dollar has now sent the Gold Price in Euros soaring...

THE PIECE we wrote on gold de-coupling from the Euro/Dollar exchange rate proved correct, notes Julian Phillips at the GoldForecaster.com.

The action of the last week has shown that as gold rose strongly in the Euro in the Pound and is moving up in the Dollar alongside most currencies.

More than that, market commentators are now mentioning this too. But this action involves far more than these two main currencies.

Now replace the glasses with the Dollar and the Euro. Both are now under question.

It was exchangeable for $50 worth of Gold Bullion when gold was fixed at $20 an ounce. Note the same President's picture there. 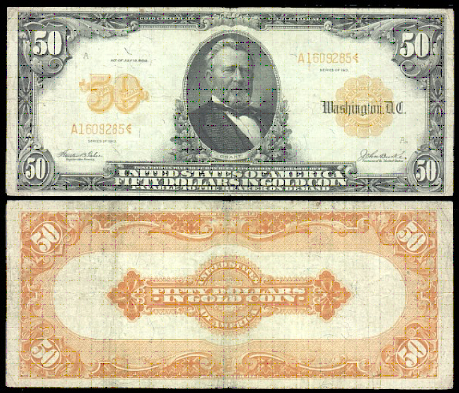 The modern note is not exchangeable for any gold let alone 2.5 ounces. And therein lies the problem of valuing any Dollar bill. Its backing is your confidence in the government and the monetary authorities issuing it, as a reliable measure of value.

The United States is not alone, of course. The Euro is now going through a similar loss of confidence. But put in your mind's eye a situation where the currency has the backing of gold and the government overseeing the currency. The dual support gives it far more value. Whereas today, you have a currency without the backing of gold and with the backing of a government trying to control the state of the economy by printing vast quantities of money in the belief that when the time is right they will withdraw it and re-establish monetary stability.

History alone gives us due cause to be prudent, doesn't it...?

On my recent trip to London I was given a $100 trillion bill from Zimbabwe. It will not even buy one sheet of toilet paper. The currency is no more. And if currencies are to retain more than a captive set of users, they have to retain the inherent disciplines that gold brings. History has shown that both politicians and bankers cannot resist the power that comes with money, and they eventually distort it. The distance between currency management that reinforces the value of that money (not just stable prices) no matter what pain is involved and profligacy is a long one. Once travelled it is extremely difficult to go back as confidence has gone.

Take a look at both the Euro and the Dollar over the last few months and you can see how far along that road we have travelled. Greece is threatening to go to the IMF and Germany still has not announced it is willing to bail out the country. Now look from Greece westward through Italy and Spain and those countries that rely on tourist spending on second homes and holidays. They're all in the same boat. Once Greece is helped, others will come too. It's more than just Greece for sure. If the IMF bails them out the Euro will weaken.

The real issue is of course the Dollar and the Pound Sterling. As we say in our global currency slot below, we are waiting for the morning to arrive when we wake up and find one Pound for commercial transactions and one Pound for capital transactions (last time called the Dollar Premium; I started my stock exchange career as a dealer in the capital currency in 1971). As for the US Dollar, keep your eyes on those 10-year Treasury bonds to see how the Dollar is faring internationally.

If China has stopped buying T-bonds and is selling, then the yield will rise and the Dollar will fall. Or did the People's Bank merely threaten to do so?

Sadly, Gold Prices are now a thermometer to the state of global currencies and the decay of confidence. As the Dollar weakens we are seeing gold rise. As the Euro weakens the Gold Price rises and when the Pound falls gold rises. The price of gold in local currencies is being more widely quoted now, not just a US Dollar price.

The problem is systemic. All currencies operate the same way and their health springs from the US Dollar and the Euro. Only resource producing or China oriented currencies look healthy at the moment. But even there we have to realize that national power lies with people irrevocably committed to putting their national interests ahead of global interests. A global reformation is called for!

But in this scene, global national authorities, without the dominance of one single nation, have neither the will nor the competence to rectify problems.

Extrapolate this situation and you see an increase in the level of currency crises in both severity and consequence. Suddenly the musings of the IMF head, M. Strauss Kahn on a completely new global currency becomes pertinent. Unless this road is followed and quickly, the situation will darken considerably.

This is why the Gold Price is moving now. As politics will have it, unless push comes to shove and the situation becomes dire, little will be done. Smart money, institutional money is quietly moving a portion into gold as a measure of prudence.

How far will the Gold Price run in the next move up? This section is for subscribers only...

Make a solid Gold Investment today, starting with a free gram of gold at BullionVault...